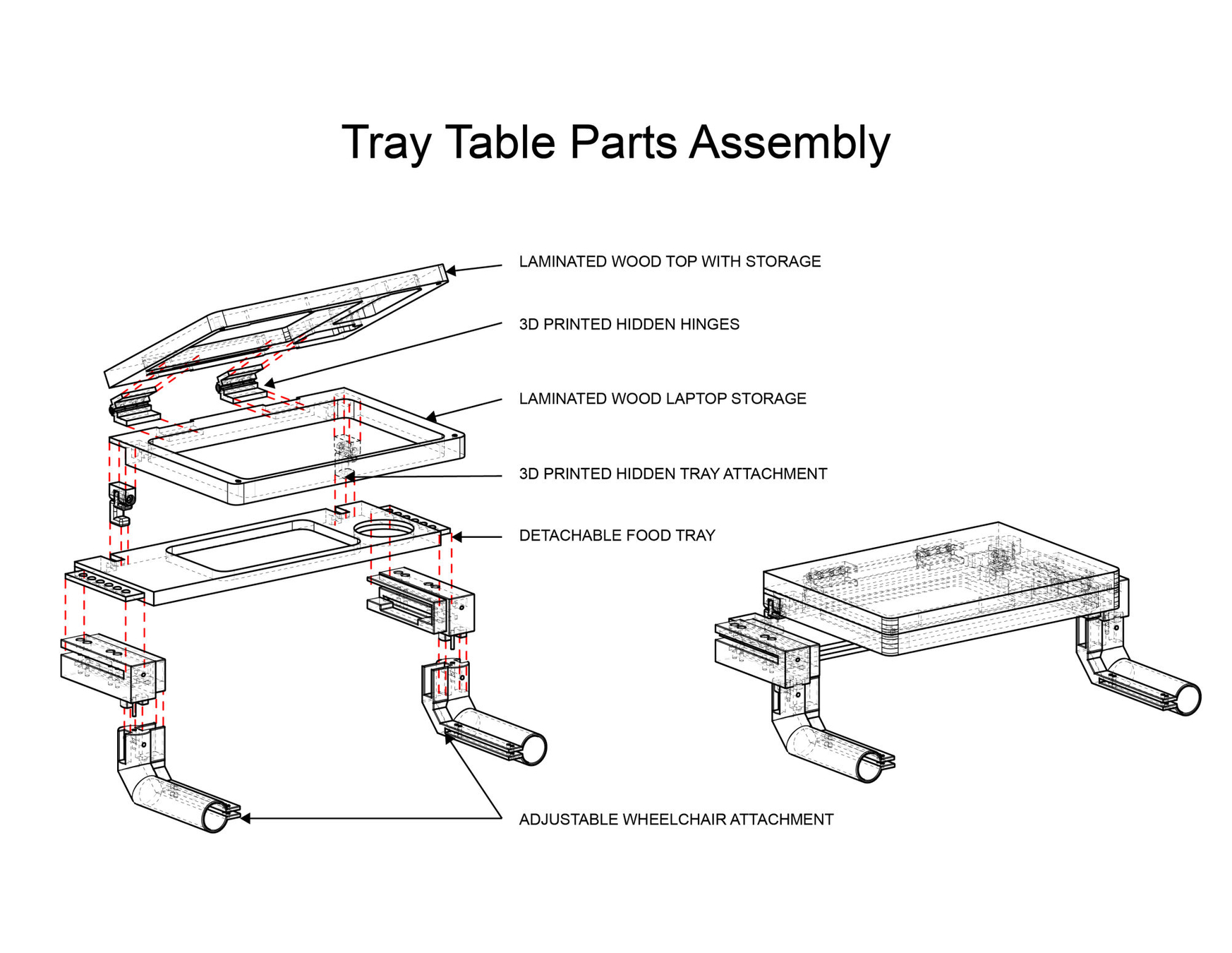 I always wished to have a cup holder to carry my drinks from the kitchen to my room and my food while I am sitting in front of the TV. There was nothing on the internet or Amazon. As the saying goes, “on top of every mountain there is a pathway.” NuVu was at the end of my pathway. With their help, the Universal Arm was invented. We are now way ahead of the competition.

The Universal Arm is an external arm that is made specifically for people in wheelchairs. For now it only works with the brand Quickie type wheelchairs. The arm is totally custom made from the ground up. It is easy to attach and detach. It was originally made to hold a tray for food, but as the process continued we added new parts so it is useful when not used for holding a tray. The Arm itself can hold pen, pencil, grocery bags, and have a place to be used as a wallet.

Three different arm was created. Each arm was unique in its own ways. The last is always the best. The problem with the first one was that it had three different hinges. The hinges were made to rotate the tray and place it on the side. Since there was not enough space on the side of my wheelchair, there was no need for the hinges. The issue with the second design was the diameter inside the tube. It was hard to slide it onto my wheelchair arm. There was also some unnecessary holes on the first par of the Universal Arm. To fix this problem was easy. I went back to the sketch and made the necessary changes. I increased the diameter by 5 mm and deleted the holes that I didn't need.

The new and final Universal Arm, at least for now, looks very strong. It is very easy to slide it on the arm. There are two parts for it because you can take it out and put it on your back pack when your not using it. There are also screw holes to adjust it, so you can rotate it to the side. The Universal Arm is not just an arm, it is a piece of art.

We will improve the arm to work with all kinds of wheelchairs. For now we are taking it one step at a time. We want this model to be as strong and useful as possible. When we are totally satisfied and like using it, then we will move forward. We started out with a box that functioned as a computer holder. Although this worked as a place to store your computer, it didn't add significant value to what's already available. Inspired by the GoPro case, we made a new kind of box that had greater use.  It was a solid brick that had holes to hold your things, like your electronics and other things meant for work.

There were several improvements that we made such as changing the arrangement of the item holders and adjusting the length of the case in order to fit in Sayed's bag. We included a food tray to fit beneath  the case so that when Sayed is done with his work he can store the case in his bag and have some tea.  Carlos made the food tray, and I made clips to attach the case to the tray. Although the design worked for the tray and the case to connect together, what didn't work was that the case looked weird when it wasn't flat because of the original clip design. The clips stuck out. In order to fix this, we put hinges on the clips so that they can be flat with the tray. We tested the function of the clips by using a pad to represent a corner of the case, and then we put the holder case prototype on the tray.  The design concept has come a long way, however, it still needs some work because Sayed's laptop doesn't fit in the case.  It won't take so long to fix.