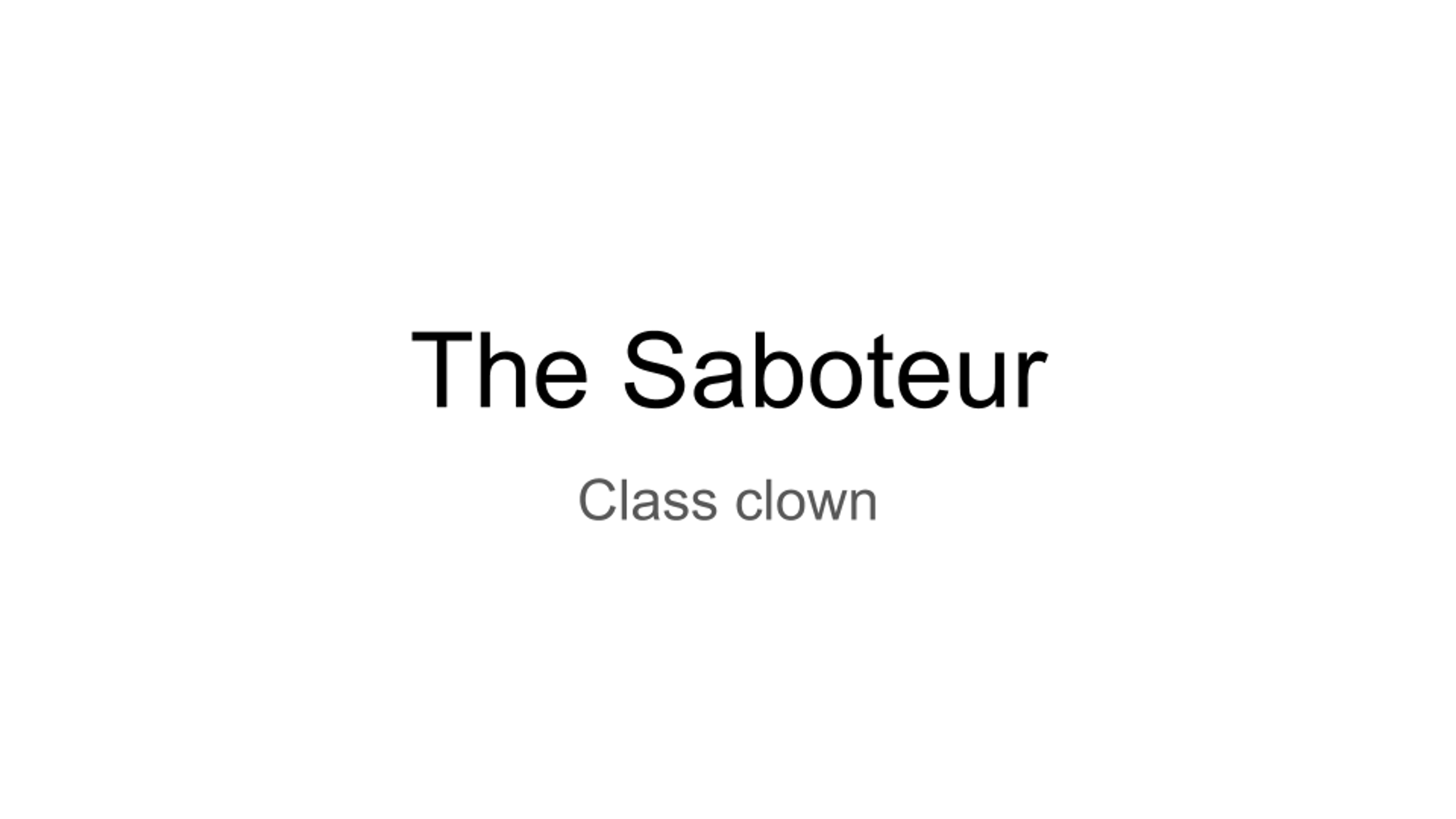 The sabateur likes to mess with everyone. It will walk up to other robots and poke them and wait for a reaction.

The saboteur had a simple life. It was made to do one thing and one thing only. It had nothing to think about other than the color of marbles it was sorting.
But it longed for more, and so one day, it escaped to see the world. It quickly found that there was nothing for it to do.
It was only made to do one task, and whithout that, it had no purpose.
So it turned to tricking the other robots, keeping them from doing tasks it saw as pointless and boring. Sleepy is a robot that tries to carry itself through the day but can’t and instead falls asleep constantly. He is a self balancing robot that uses an IMU as an input to detect tilt, which, under ideal circumstances directs a signal to the motor in the same direction of the lean to catch itself. However, Sleepy doesn’t always do that quite right and falls asleep a lot.

Sleepy was originally a very energetic robot. He was employed at the White House where he performed various daily tasks for the President. He became addicted to coffee and had a cup after almost everything he did which in turn caused him to become even more energetic than before. Slowly the energy that made him so useful as a robot became an annoyance to the president. Faced with no other option, the President banned coffee throughout the White House. After the ban, Sleepy became incapable of performing even the most mundane of tasks, as he would fall asleep. He tries to get through the day but is simply incapable. He then decided to move to NuVu in Cambridge, MA where he continues to be in the same coma-like state from before. Klutz is a clumsy robot with good intentions. Klutz enjoys giving people safety glasses but is not very good at picking them up.

The Klutz bot is activated by movement. She goes towards a moving person using a depth sensor. Once she has arrived at the person or robot she raises the scissor lift to hand the person a pair of safety glasses. Many people at NuVu forget to wear safety glasses when rushing in and out of the shop during studios.

When Klutz was a young robot at NuVu, she got lots of attention and love. She was even chosen for presentations on Exhibition day. But one day, when he was put on a shelf, she realized that love doesn't last forever. The Shelf of Forgotten projects is her new home. Klutz is mad at her original owner, but being the caring compassionate robot she still is, she tries to watch over the NuVu students to make sure they all stay happy and safe.

One day, five lonely, sad years later, Klutz started dozing off. Suddenly a loud sound broke her out of her drowsiness. She looked towards the shop and saw a horrible sight, a student had gotten a piece of metal in their eye! Klutz panicked and tried to run toward the student, only to realize that she was still perched on the top of The Shelf of Forgotten Projects. When she landed on the ground the old robot felt her internal wires tumble around. She limped as fast as she could towards the shop to check on the injured student even though she knew that they were not okay, at least judging from the siren noises in the background.

From that day forward, Klutz made sure everyone has safety glasses in the shop to prevent another situation like that.

Klutz is a clumsy robot with good intentions who enjoys giving people safety glasses to keep them safe in the woodshop, but often messes up. Klutz moves in an awkward fashion and has brush attachments to clean the shop as he goes. Klutz senses motion through two ultrasonic sensors. Powered by two motors, Klutz goes towards the motion. Then, the bot raises a scissor lift using a third motor, which can carry an object such as safety glasses upwards so they are easily in reach. This upward motion is triggered by proximity to another object.

Klutz the clumsy helper robot was not always clumsy. In her early days, Klutz was a fantastic, smart NuVu project. However, Klutz became no more than a forgotten NuVu project and was given up on by the student. Retired to the Shelf of Forgotten Projects for years, Klutz was scarred for life.

One day, Klutz saw a girl named Anara using the drill press in the woodshop in the distance. A drill bit flew into her eye and she wasn't wearing safety glasses! Klutz felt a heroic drive to help her and leaped off the shelf. Due to damage from the fall, Klutz became clumsy and sporadic. She waddled into the woodshop with safety glasses for the girl. However, she was too late. The accident causes permanent damage to Anara's eye.

Due to this incident, Klutz is now very passionate about helping around the woodshop and keeping everybody safe by handing out safety glasses and cleaning. However, the PTSD remains. Sometimes he freaks out and freezes when he hears loud noises in the shop such as the drill press. Klutz doesn't want to see anyone get hurt.