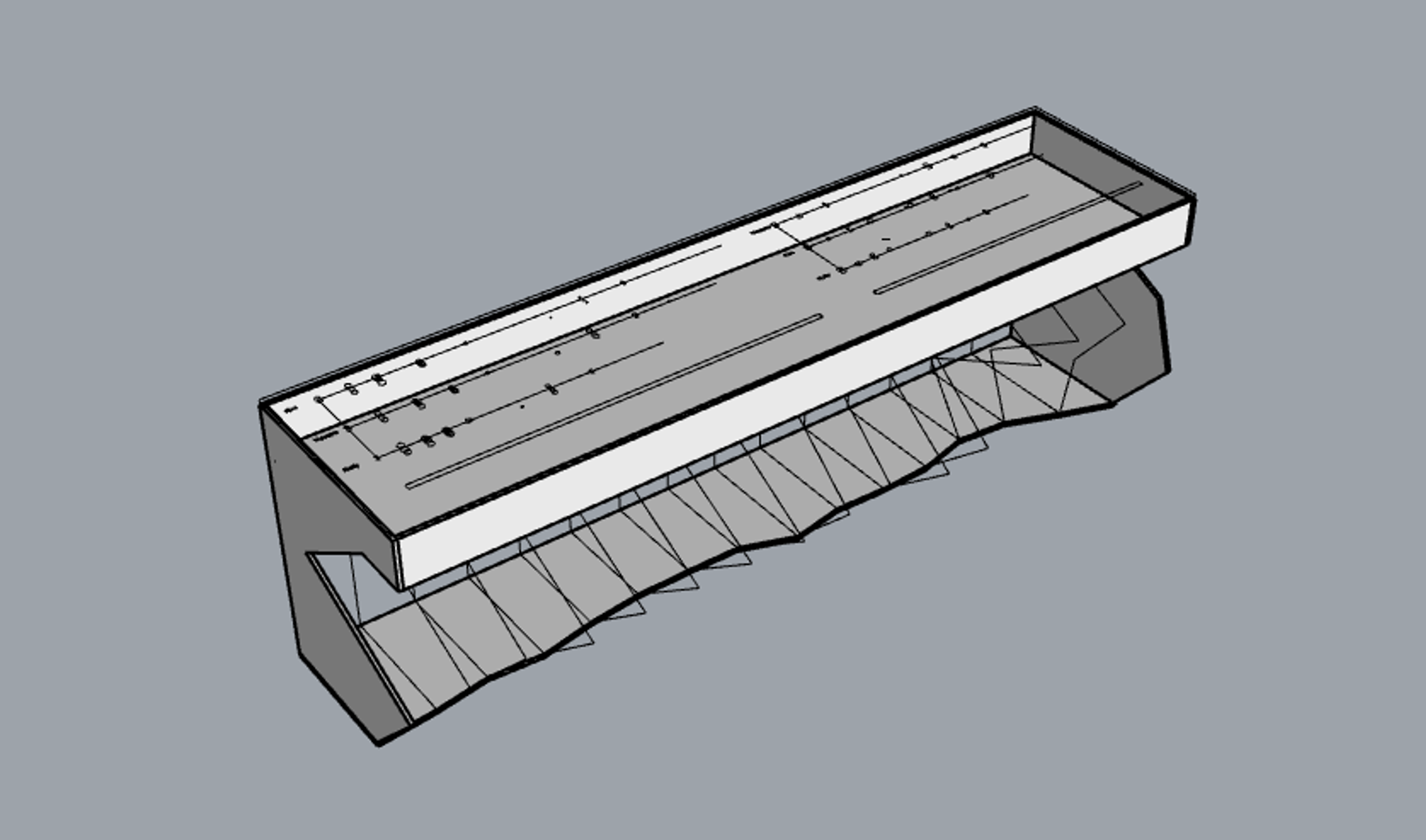 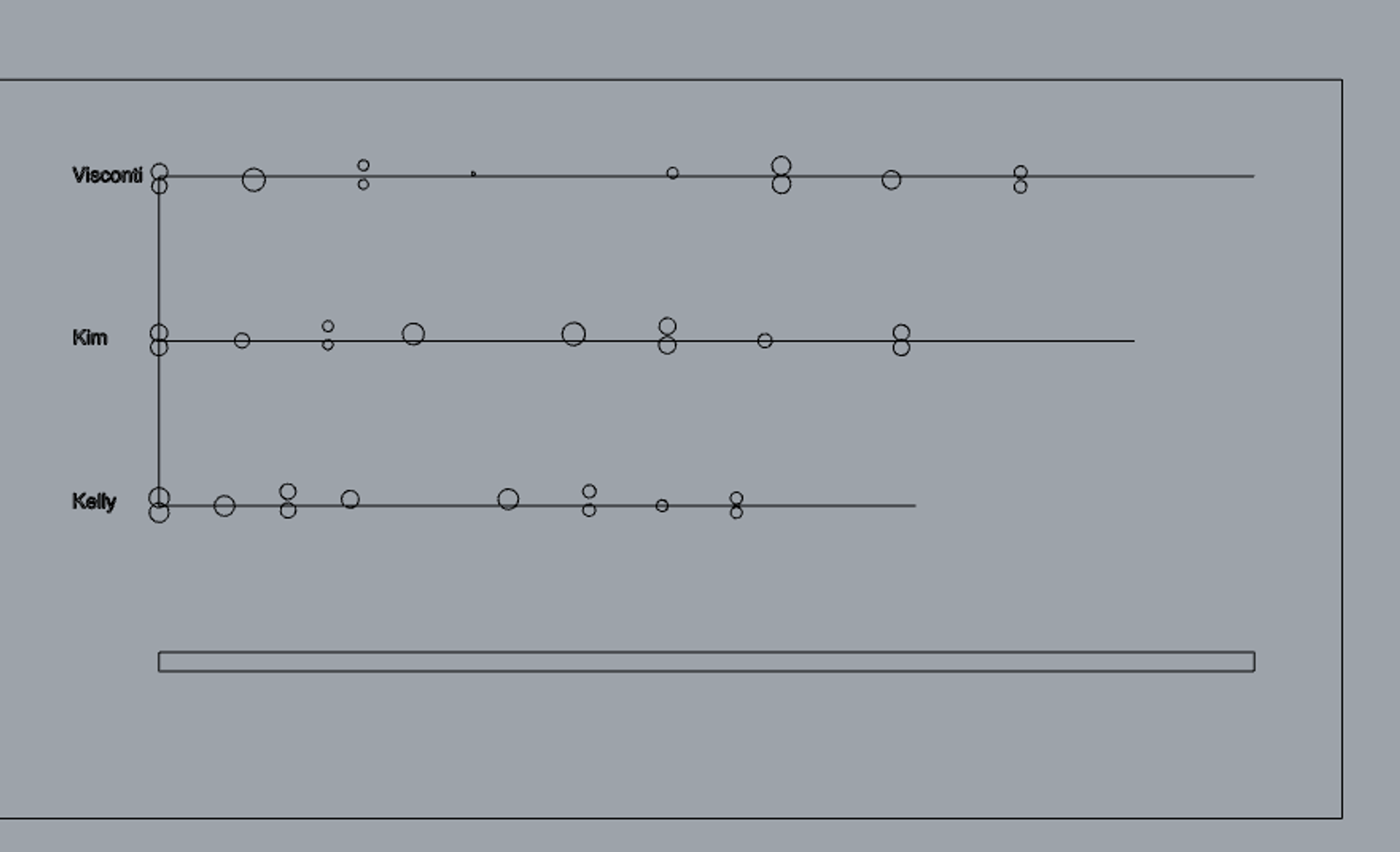 We originally wanted to make the table 25 feet long, and have sliders for each note in the piece of music. The museum restricted us to only eight feet long, so we decided to make the table eight feet long. Because of this, we decided that instead of doing the entire piece of music and having 177 sliders, that we would just do two phrases. We did phrases seven, and seventeen as both phrases had eight events each, equaling sixteen sliders total. Once we had all of this information, we started to design the table. We had decided earlier that we were going to have the sliders ride in a C channel with the gradient on the inside of the C channel. That was the only thing that we needed to add into our design.

The table we designed has 16 legs. Each leg represents a musical note in the piece. The legs are all made out of data, which determines the look of the leg. Each leg has four points, which vary based on the loudness of that note, the pitch, and the spacing of the note. We chose to do 16 notes because that is the number of sliders we have, and we wanted to keep it consistent.

We got the data for the legs from some code we wrote, and that code turned the data into graphs. Once we had the graphs we went into illustrator and traced over them, so we had them in a .dxf file so that we could use them in the model. Each leg of the table has a corresponding graph of the musical note.

Once we had the lines for the legs from the graphs, we started to place them where the legs would be, to see if we still liked the overall shape of the table.

We decided the table design was still a go, so then we modeled it once again with all the right dimensions. We decided that the table would be two inches shorter than we had originally planned, just to make it simpler to cut.

Modeling the table with the right dimensions was much harder than modeling it for looks. We had to take into consideration the thickness of the materials, and how each piece would fit together. We are using a CNC Cutter to cut out the pieces. Unlike a laser cutter, which we are used to using, the CNC Cutter cannot make sharp corners and only makes rounded corners. This is because it uses a drill bit to cut. Usually we would design something like the table as puzzle pieces that fit together. Instead we designed the table as if we were building it with screws. We were essentially designing a piece of furniture that would fit together as if it came from Ikea.

This part of the design was very difficult. As we worked on the computer we kept messing up every single unit of the table. It took a few tries before we had designed it correctly. The next step was to make the pieces all 2D, so they would be in a format that the CNC Cutter could read.

Once we had the table and the pieces cut out, we had to take table and put it together. We had to go through and sand each piece down. We had to sand the edges so no one would get splinters and also the fronts to smooth them and clean them.

Once we had them all cleaned we laid each piece out so that the pretty side was facing up. When we had arranged the pieces, we started to stain them. We went over each piece with a cloth, to get all the dust out and then paint the stain on each piece. We did the big pieces first, so that they would dry first so we could start putting the top together when they dried.  It took a long time to stain them. The big pieces took about an hour to stain. After we finished the big pieces, we started on the legs of the table. We spent two hours staining the legs. We used an entire can of stain on the table.

Once we had all the pieces stained, we started to put it together. We made a template so we could get the screws in the same place every time, and then started to put the table top together first. Once we had the tabletop put together, we started to put the legs onto the table. We had numbered each of the legs before we stained them, so it was easier to put them back in their place.  We put all the legs in, and thought we were done. We were feeling very accomplished. But, we had assembled the table upside down, and when we went to flip the table over right side up, every single leg fell out. It was slightly discouraging. We persevered, and then put entire table back together again, this time wood gluing the back of each leg so they wouldn’t fall out.

After we had the tabletop essentially put together, we had to figure out the inside of the table, and how everything would fit together. We decided that the C channels for the sliders to go in would sit on some 2x4s and be drilled into place to keep them steady. Once we had the design done we felt pretty accomplished, but we were nowhere near done.