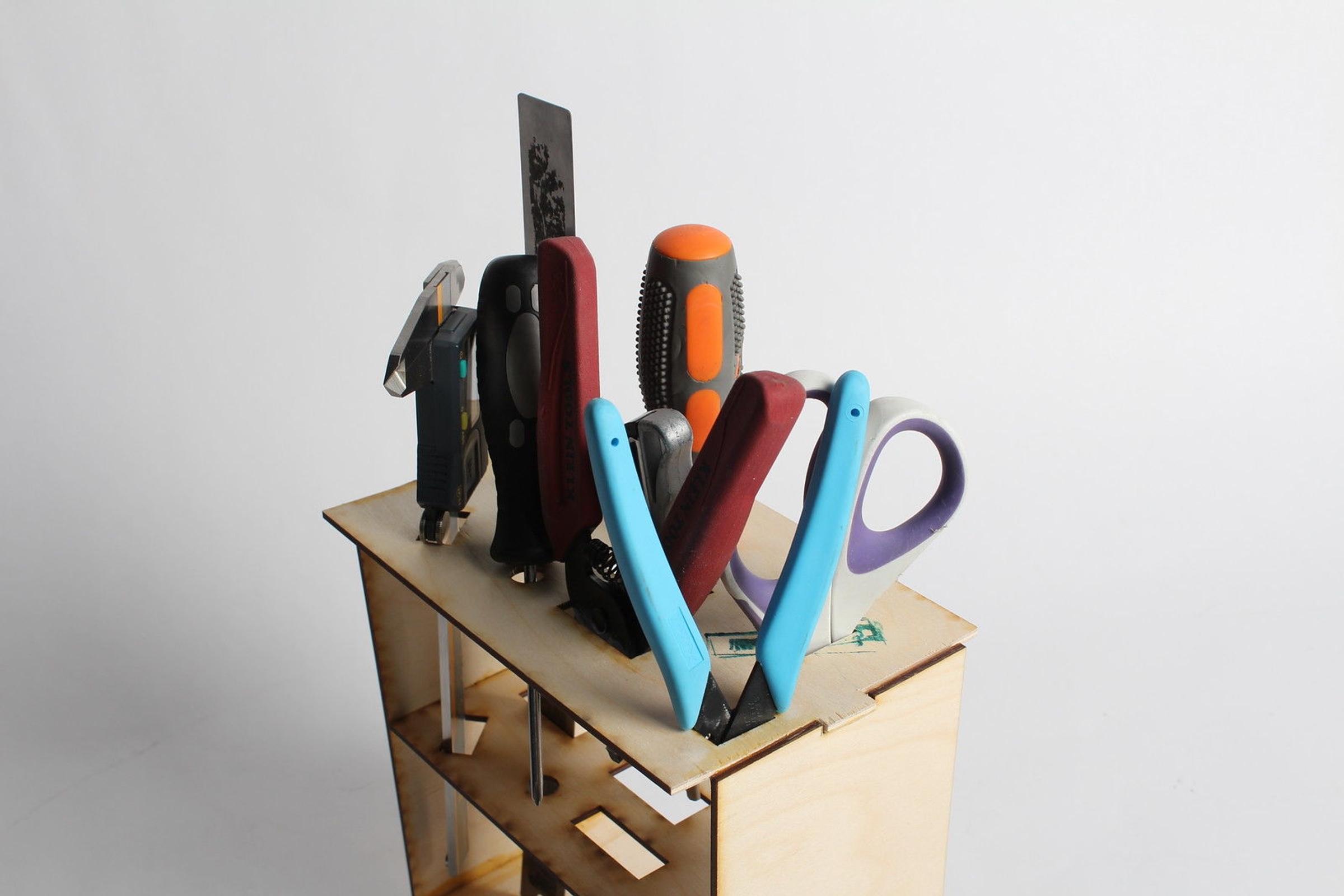 Tool organization and management at NuVu is a significant problem. Forgotten tools clutter workspace which leads to wasted time spent looking for tools you actually need. We created a solution to this problem. We designed a storage system that fits in between the tables. The frame is clamped on one side of a table so that it can be used with a solo table or two tables joined together. One of the most challenging aspects of this project was engineering it to bear enough weight. The lips clamping it to the table are attached with a "T" joint. The lip and the wall it is attached to each have two layers of wood glued together. One layer has square cut outs and corresponding square tabs. The other layers has "T" like holes and corresponding T tabs. The T layers are glued on top of the square layers creating a strong bond.

Our current iteration has two modules (future ones will have more);One for tools and one for laptops and notebooks. The module for tools holds the tools that are most commonly removed from the shop: rulers, calibers, scissors, box cutters, screw drivers, wire cutters and strippers, and pliers. The laptop module can hold two laptops vertically. The reason we decided to store the laptops vertically as opposed to horizontally is to maximize the vertical space and to minimize the horizontal space. Future iterations will accommodate more modules (geared towards specific tool sets) and power cords. 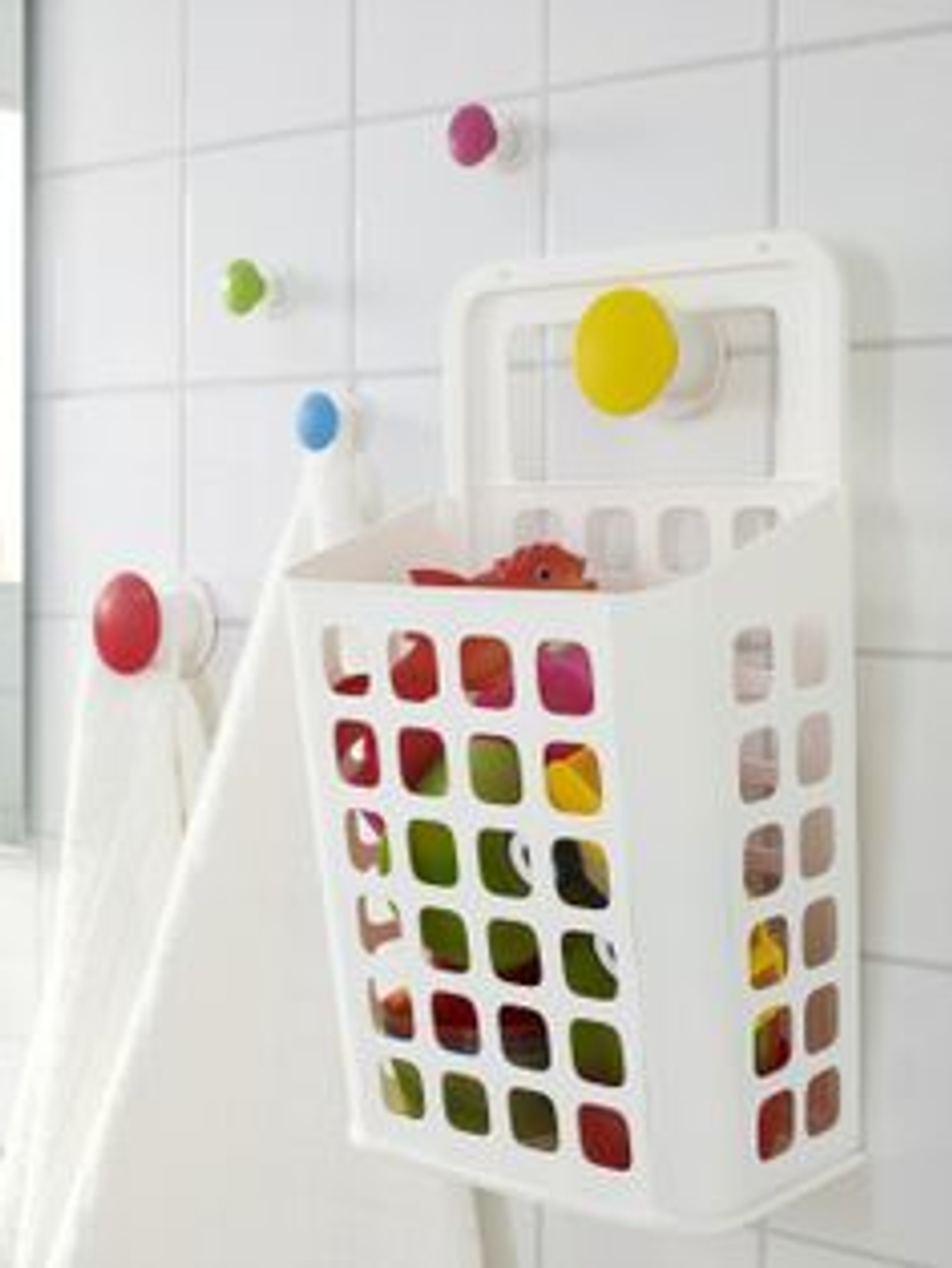 After looking into and discussing some of the ways that the space at NuVu can be improved, Harper, Cole and I decided to focus on tools. Tools are left out on tables and the floor in every area of our work space. While NuVu is extremely well stocked with necessary tools, often times, people cannot find the tools that they need because materials are rarely put back in the proper place. Instead, they end up living on the desks of students rather than their designated home. We started our process by looking at precedents. The goals we had in mind for our final product were being able to carry something to the shop, gather tools and bring them back. The creation that held this removable part had to be removable as well. Another goal was to be able to put computers, sketchbooks, pens, and pencils in it (all at the same time) so that they are visible to passersby.

We started off by playing with the space in between two tables. We discussed previous designs and sketched something similar. The difference between our idea and what we found in our precedent research was that the compartments would slide onto the table. What we liked about a previous design was that it had a lot of storage room (separate compartments for tools and personal belongings), it was sturdy and easily attachable. However, some flaws are that the legs prevent the invention from sliding onto the table, and once it is on the table, it's hard to reach to the middle of the table and over the lip of the basket.

Attempting to solve these issues, we discussed something sedentary in the middle of the two tables that would have a removable toolbox-like bin with a handle. After some modifications and discussion of goals/what our tool holder needed to have and what we wanted it to have, we came up with our final design. Where the two tables usually meet, there are be two sort of toughs that take up the right side of each table. When the tables are pushed together, it looks like one piece. It is attached by a thin and short lip resting on the table. This maximized the surface area to work on. The pocket was made fairly shallow in order to have things stick up and be seen, however, it is wide enough for someone to reach their hand in. We had a lower support forming a clamp with a half circle cut out on near the closed end to fasten around the table leg for stability.

This design allowed computer to be charged easily and tools to be stored (by adding a cover with holes). It also allows one to put their computer in and still have easy access to it. This design was really versatile because inserts could be made for the slots. It was also sturdy, but not good enough.

One of the issues with our last iteration was the way in which the trough clamped onto the table. When stuff was put into the basket, it started to bend and the clamp on top lifted. We examined some different ways to attach this piece and methods for how to make the bond stronger. We ended up with an idea similar to finger joints. We put two pieces of wood together for extra strength but also so that there could be a “T” groove. Another issue was the leg cut outs. The legs of the tables at NuVu vary in diameter and spacing. Thus, one specific half circle would not fit around all of the tables. To fix this, our second iteration had as shortened bottom clamp on both sides. In addition to this, instead of adding tool filters and ones for pens, pencils, sketch books and computers, we decided to make them more box-like.

In our third iteration, the clamping method for the attachment of our design includes a top and bottom plate consisting of two pieces of laminated wood for extra support. There are also triangular supports attached to the bottom plate and the side wall. Also, our design is now built to house specific tools and only such so that it is not trashcan-like. It is meant to hold computers, sketchbooks (or some loose papers), and things from the shop. There will no longer be a bottom to our basket/pocket but, now, just a frame with the specific modules. The tool module is still removable, but no longer box-like. The laptop and sketchbook module was designed to rest vertically, rather than horizontal, so that in addition to the tool holder, we can have a cup for pens and pencils, more space for another module in the future, and charging boxes. The “T” joint attachment method is extremely sturdy and having just the frame allows for ample vertical space.