The idea behind our project is that the current state of waiting rooms is not efficient nor comfortable for anyone involved in the process. We want to redesign a waiting room that encompasses what patients, doctors, and hospitals/clinics need. Patients have places to relax and occupy themselves, doctors have a place to talk to the patient in a more open environment and a way to prescribe medication that the patients can pick up immediately after the check up, and hospitals have a way to make more money with our cafe and gift area.

When we did research, we found a lot of cool architecture ideas that different companies have done with office, cafe, and waiting room spaces. We also found that making conscious decisions about the colors of the room can change the attitude of the patient and everyone in the room. For example, natural, earthy, and beach toned colors calm a patient and make him or her feel more at home. This is why we included the vine arch entryway to the children's area and recommend adding plants on the top of the semicircle couch.

Our first design looks similar to the end result, but we made a few important changes along the way that change the overall flow of the room. In this idea, each of the areas is separate. When we transmuted this into Rhino, we realized that we did not account for dimensions, so we had to change the places where we put each area. The pods changed from behind the receptionist to the top right corner, the kids' area moved to the bottom left corner, and the pharmacy became the back of the receptionist's desk.

After putting everything on Rhino, the room still felt divided. Flow was complicated and there was dead space between each area (see between cafe and pods/kids' space and TV room). We decided to connect the couch on the kids area to the TV room couch, get rid of the TV room walls, extend our semi-circle couch to connect to a pod, and wrap our cafe area around the back of the semicircle couch. To compensate for cutting out the TV area walls, we found out about sound domes, which are domes that people stand under to hear certain sounds (like a TV show or movie). If someone is not standing under the dome, he or she cannot hear the sound. This is a solution that allows our space to feel open, yet maintain its quiet composition even with a TV. The last way that we changed the flow and division of space was to lift the ceiling over more open flow space and drop it over areas that we wanted to feel different than the open middle.

The flow diagrams are intended for different types of patients, illustrating where they would typically go in our waiting room. The general flow illustrates the main path each patient will take. They will first check in at reception after entering, then they will make their way to the doctors' office, then when they come out they will pick up a perscription at the pharmacy and leave. There is a diagram for a more private family or group. They would check in at reception and head to either a pod or couch, then go to the doctors office when called in. The diagram for children and parents shows both groups heading to either the kids' are or the TV area. Finally, there is an option for a patient going in alone. He or she would go to either the cafe, the couch, or the TV area before going to the doctors.

Obviously, these are not the only options all of these patients have. A parent may go to the cafe to get a coffee or a treat for his or her child. A more private family may want to watch a movie in the TV area. A singular patient may sit outside the kids' area to read a magazine. But I think that's what makes our waiting room stand out; the patients have options.

We diagrammed the privacy and sound level throughout the space as well. The most quiet areas are also the most private (TV area, pods, couches).

The final product our group had was the modern cane with a lighting system embedded within the middle cane leg. The cane is designed to work as a third leg for someone who is either handicapped, physically impaired, or for a senior citizen. The base of the cane has a broad width in order for stability and has rounded sides in order for the user to mimic the motion of a foot when walking with the cane. The initial model was supposed to incorporate a pedomiter and bluetooth system, however there were significant problems with fitting the electronics into the handle and having them work successfully. However, the lighting function was still able to function in the final model which was the main focus with the electronics portion. The inspiration came from two new canes that had very modern designs and had a heavy technological focus. The cane was based off of two different models and the electronics were inspired by the Fujitsu cane. In the final design the cane has a button on the top of the handle which connects to an arduino that activates the LED lights that are in the middle clear cane leg. The clear leg is surrounded by 3 other wooden legs in order to maintain the support of the user's weight on the cane.

In this studio, we redesigned and hacked the waiting room. Our ideal room provides a combination of public, private, quiet, and loud spaces for patients and doctors. There is a receptionist/pharmacy, a cafe, private pods, a TV room, and a kids space. The goal is that prospective architects can take specific "spaces" (i.e. the cafe or kids space) and incorporate it into their specific hospitals. Our hospital waiting room can suit multiple types of patients such as parents with children, singular patients, or couples. The nature-themed color palette and materials create an open, asethetically pleasing, and inviting area. It is a new and healthy transformation of the old, sterile waiting rooms present today.

Our studio began with the introduction to healthcare and its daily issues. The background of our coaches and their intrigue to teach us about these issues in healthcare and the different perspectives that are present were interesting. It was emphasized that sometimes its easier for those unfamiliar with the systems of healthcare to invent applications or new ideas because they have a different vision. It's important to question why something is the way it is and what issues it creates. We were all very ambitious at the beginning of the studio and wanted to create something brand new solving a pressing issue but we didn't realize the brainstorming process itself was time consuming. We deviated from our initial plans of creating something new because of the time restraint of two weeks so we decided to improve an important tool in the healthcare industry that needs transformation. We present to you the journey to creating our modern cane!

This process was not simple. It went from researching to what was out there first to transforming an existing tool that millions of people use worldwide. We had to decide the structure of the cane and what applications we wanted to incorporate. The Fujitsu Cane was an inspiration for our handle. We knew that we wanted our handle to be thicker and rounder for more comfort and insertion of applications. Our ambitious brainstorming ideas included the insertion of a life alert button, wrist handle, pedometer, thank you/please move out of the way and medicine compartment. The Isowalk was another inspiration for our foot and cane leg. The Isowalk leg helped create a supportive and stable cane leg while also helping us decide that a rounded foot is the best design to comfortably assist our customer.

Our Journey to the Official Cane:

First we organized our ideas for the official cane leg. Initially we wanted use the tripod mechanism for the cane leg so storage could be convenient for the customer. After testing the tripod mechanism we decided that it would be too dangerous because when a lot of pressure is applied it could collapse and create a health hazard. Therefore, our group decided we would stick to a stylistic and lighter cane leg with three wooden poles, an acrylic pole for LED lights and multiple base holders. The base holders had four holes and we had to precisely 3D design them in order to make sure that they fit and were stable with the other poles. This process required numerous reprinting and testing and after great team work we finally created the best base holder for our cane.

Next was the decisions we had to make for the handle. After 3D modeling the handle we had to 3D print the handle and insert screws to combine the two sides. While creating the handle we programmed the LED lights with an arduino. We had issues with the size of the battery and decided that we needed to reprint one side of our handle in order to fit all of our components. After completing the handle we couldn't implement the life alert button because it was pricey but it could easily be applied to a cane if this project was picked up in the future. We didn't implement the wrist strap because we ran out of material and we attempted to program the audio for our command buttons but we had issues with obtaining the correct audio files for our coding. Therefore, we were left with our pedometer. We spent time trying to test our pedometer and whether or not it tracked our footsteps. We tried placing it on the bottom and back of the handle and it didn't work. After that we tried placing it at the top, bottom, and middle of our cane leg and that didn't work either. Sadly, we had to remove our pedometer but as a team we decided that if we were to pick it up as our independent project we would implement all of our amazing applications. We programmed the LED lights and used a touch sensor button that tracks the heat of one's finger to trigger the LED lights on and off. Our LED lights were great because they are really important to customers, especially in the night time. It allows our customers to place their cane next to them if ever needed for support at night.

We learned that team work is key and ambitions are great but you have to accept what you have and what you can work with. Our team was great at transitioning from multiple adjustments along the journey. If one idea didn't work we were open to jumping to another one or teaming up and attempting to brainstorm new ideas that could enhance our product. Although our final didn't match our initial sketches I am very proud of our team and our final product. We had numerous challenges but we worked through them and were able to experience the special skills design teams at companies need in order to be successful. 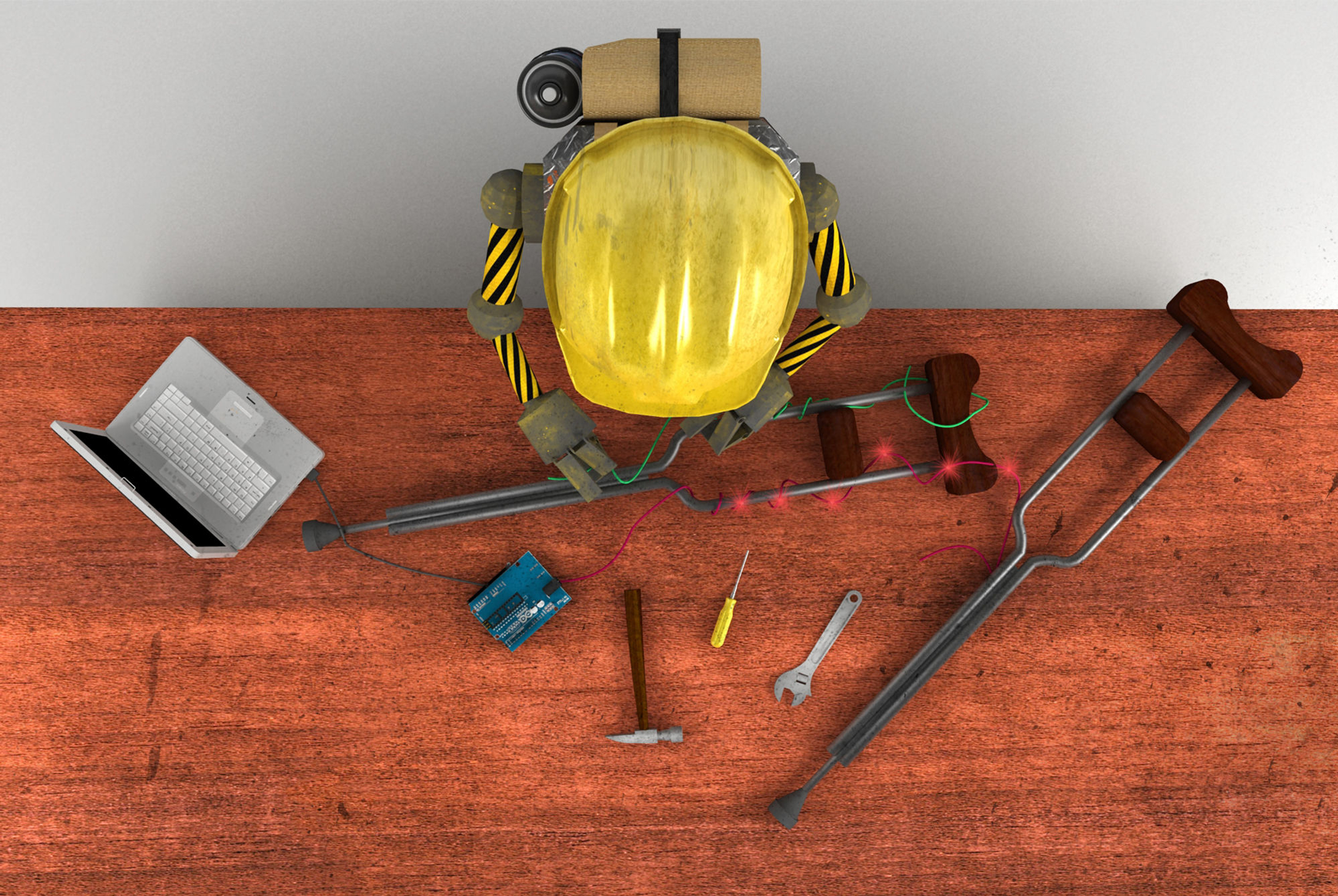