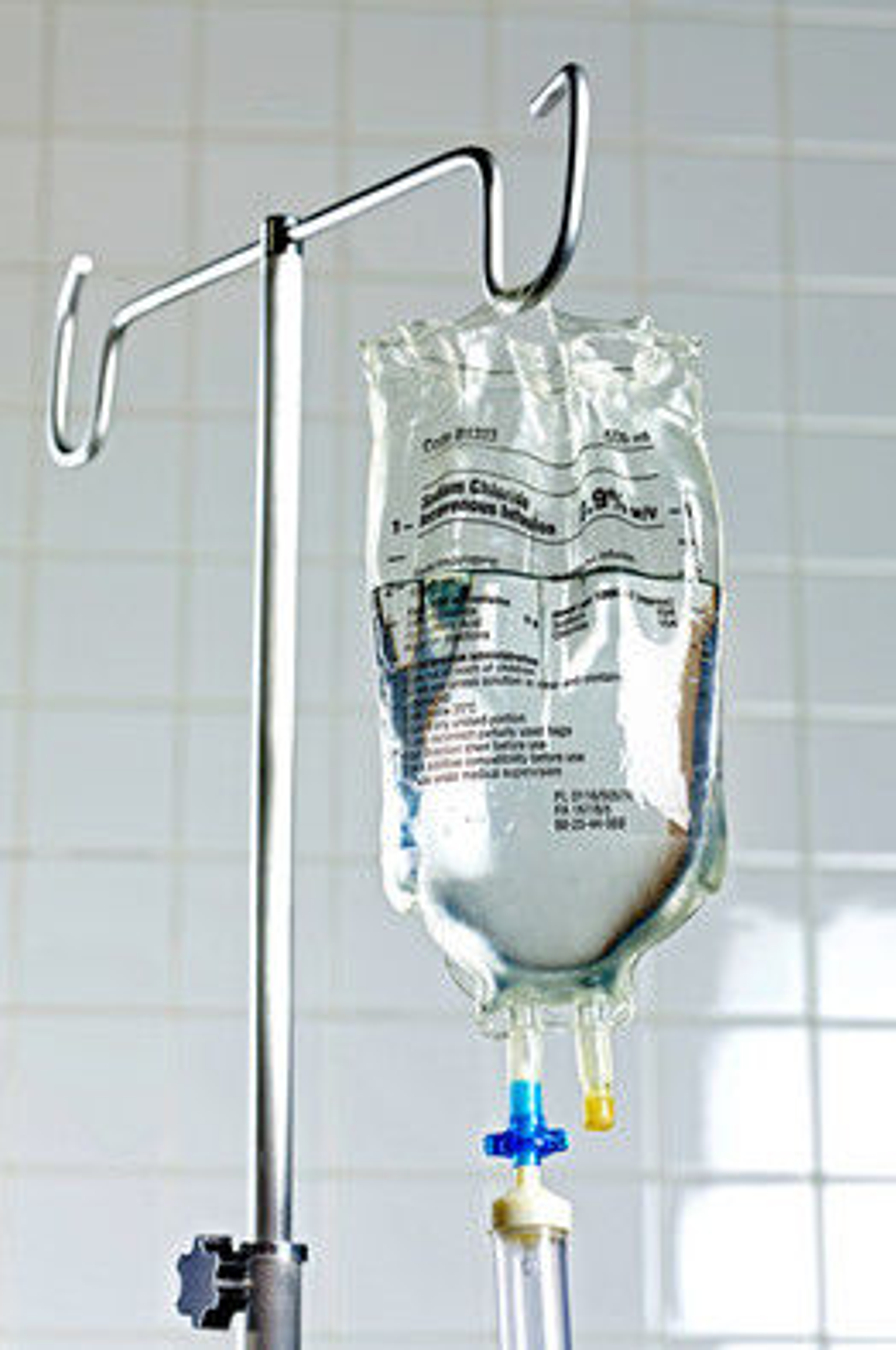 Many people have careers that place them on the brink of life and death. While there are many technologies out there to help people who are placed in those situations, there are still many advancements that need to be made. For the brainstorming process, we brainstormed many different scenarios and careers that place people on the brink of life. Among these careers are deep sea divers, firefighters, high altitude mountaineers, and back-country skiers. People who take part in these activities experience hypothermia, low oxygen levels, and frostbite, among other issues. While doing research on hypothermia we found that one of the first things that doctors do to treat hypothermia is give them a heated IV. This heated IV allows the patient to raise their body temperature, easing them out of hypothermia. Our group thought that creating a portable heated IV would be great for people who are experiencing hypothermia while high altitude climbing, and once treated with this IV, they will be healthy enough to summit the mountain to seek medical help.

Originally, we were going to have IV bags that people would carry in their packs. After thinking about that for awhile, we realized that carrying an IV bag would add a bunch of extra weight to a backpack. Most high altitude climbers use Nalgenes, so we decided to use the water from our Nalgene for the IV. The water in the Nalgene will be purified by UV lights. Additionally, in the compartment there will be a salt tab that will mix with the water to create the saline solution that is normally found in an IV bag.

The first iteration of the portable heated IV screwed onto the top of the water bottle. This cap was comprised of 6 holes for the UV lights, with a hole in the middle for the IV. We liked the shape of the compartment, and it screwed on and off of the Nalgene cap easily, so we continued off that idea for our next iteration. However, the piece wasn’t long enough, so we decided to lengthen it. We knew before creating the piece that it would not hold the cuff and the necessary technology involved in our piece, but we created it to test the shape and idea.

In our second iteration, we redesigned the cylinder so that it actually had two compartments that would screw together. Though there were two compartments, there would be a small piece in between the two that would screw them together, so that they remained the same diameter and size. We designed the piece to fit exactly between the two compartments so that it wouldn’t be visible when the entire piece was together. The part had triangular shaped spaces cutting through it where the IV tube and wires for the technology side of our studio fit. In the upper cylinder, the holes remained for the UV lights, but there was more space underneath for the Arduino. In the bottom compartment, we created a hole in the middle designed to fit the IV reservoir and tubing, and small spaces directly next to the reservoir where the resistors to warm the reservoir sat. This spacing for the pieces worked well, except that the entire reservoir piece took up too much room, so much that all of the compartments didn’t screw together. Underneath the inner part designed to hold the reservoir and resistors, there was room underneath to hold the arm cuff and the excess tubing. We also designed two caps to close together the whole piece. Except for the fact that it was a bit sharp and there some minor fitting issues, the caps worked well and made the entire piece compact and portable. For the next iteration, which was the final one, we made a few critical changes.

The next iteration was the design of the arm cuff. The purpose of the arm cuff is to hold and stabilize the needle, making it easier to slide and secure in the user’s arm. However, the cuff couldn’t be too big, because otherwise it wouldn’t fit in our bottom compartment, defeating the purpose of keeping all the pieces in one place. On Fusion, we created the piece so that it rounded to sit on the user’s forearm comfortably. There were two cutouts on the ends to connect with the Velcro strapping that would allow for adjustability and security. The top of the cuff had a track allowing the needle holder to run back and forth. The needle holder was just a semi circle piece, with the length across being the diameter of the needle holder on the tubing, so that the needle holder would just pop into place on the cuff. There were a few issues with the piece, though. The two cutouts on the ends were thin, so they weren’t strong enough to hold the strapping - one of the pieces actually broke. Another problem was the semi circle needle holder on the cuff didn’t hold the actual casing around the needle, so it fit it but didn’t keep it in place. Also, the body of the cuff wasn’t long enough to fit comfortably. For our final iteration, we had to change these issues.

The final iteration of the container is pretty similar to the previous, we only changed a few things. The major change that we made was to the canister. We moved the IV holder to the side so that the tube and electronics can go out the side instead of through the middle. The second compartment that we added was for the battery pack. Adding this battery pack allows us to use a bigger battery, and still fit everything within the container. The final thing that we made space for in the container is the cuff. Secondly, we reprinted the connector screw. While keeping the hole consistent throughout, we made the reel slits only halfway through. We kept the slits so that we can twist the screw, but we made part of it solid so that the user can not see the arduino and chords while in use.

This process began by deciding what sensors and devices we wanted to use in order to perform the most beneficial functions to the portable IV.  The first and most obvious function was a heating device due to the extremely cold temperatures on mountains that the user would be hiking in.  This heating device would be used to heat the IV to the optimal heat between 104 and 106 degrees Fahrenheit.  The idea of this heating device is that is using the heat that resistors generate in order to heat the IV drip to the optimal temperature.  This process began by simply hooking a 3.9 ohm resistor up to the Arduino and attaching the resistor up to the temperature sensor in order to read the heat that the resistor was giving off.  Initially there was not enough power to make the resistor heat up to the optimal heat.  Many alterations were then made over a span of three days.  The result was four resistors saudered in series hooked up to an 11 volt lithium polymer battery. This battery provided the correct amount of power in order to heat the resistors up to the correct temperature.  The four resistors could now be wrapped around the temperature sensor in order to insulate the increased heat.  This allowed for the temperature to increase faster.  The arduino was then programmed to cool down if the temperature exceeded 106 degrees and heat up if the temperature fell below 102 degrees the resistors would heat up again.  After this was successfully programmed the sketch was uploaded to an Arduino Micro, and the necessary wires were saudered into a perf board in order to minimize the size of the device in order for the device to fit into the piece.  After this was done, UV lights were attached in series and saudered together in order to fit into the holes in which they are meant to be placed within the piece.  However, the lights should have been attached in parallel rather than in series.  This issue was fixed and the lights worked. The device purifies the water using a cap with built in UV lights. This "purifier" screws into a separate compartment containing ceramic resistors that heat the IV drip reservoir. After being purified and heated, the water flows through the IV tubing until it reaches the needle. The needle is intended to be clipped into the specialized cuff created. The cuff is an 3D printed semi-circle placed on a person's forearm. The cuff is designed to simplify and secure the injection of the IV needle into the person's vein. The other compartments of the cannister hold other necessary components including the salt tablet/packet, a vein finder (Infrared light device), etc.

The importance of the product is clear--it could be the defying factor of a high altitude climber's survival. Without the Portable Warm IV, a person could possibly die of hypothermia on the mountain but with the IV, the chance of his or her core body temperature warming enough to prolong the survival long enough to receive medical assistance is likely. There are no existing products that are capable of helping high altitude mountaineers let alone in extreme conditions return their body to a normal temperature. Since hypothermia is such a serious threat to the lives of mountaineers, it is crucial to have a device that would keep them alive at high altitudes and dangerously cold temperatures. The portable warm IV would bring the user fundamental and pragmatic medical attention immediately, making it a life-changing product... Literally.