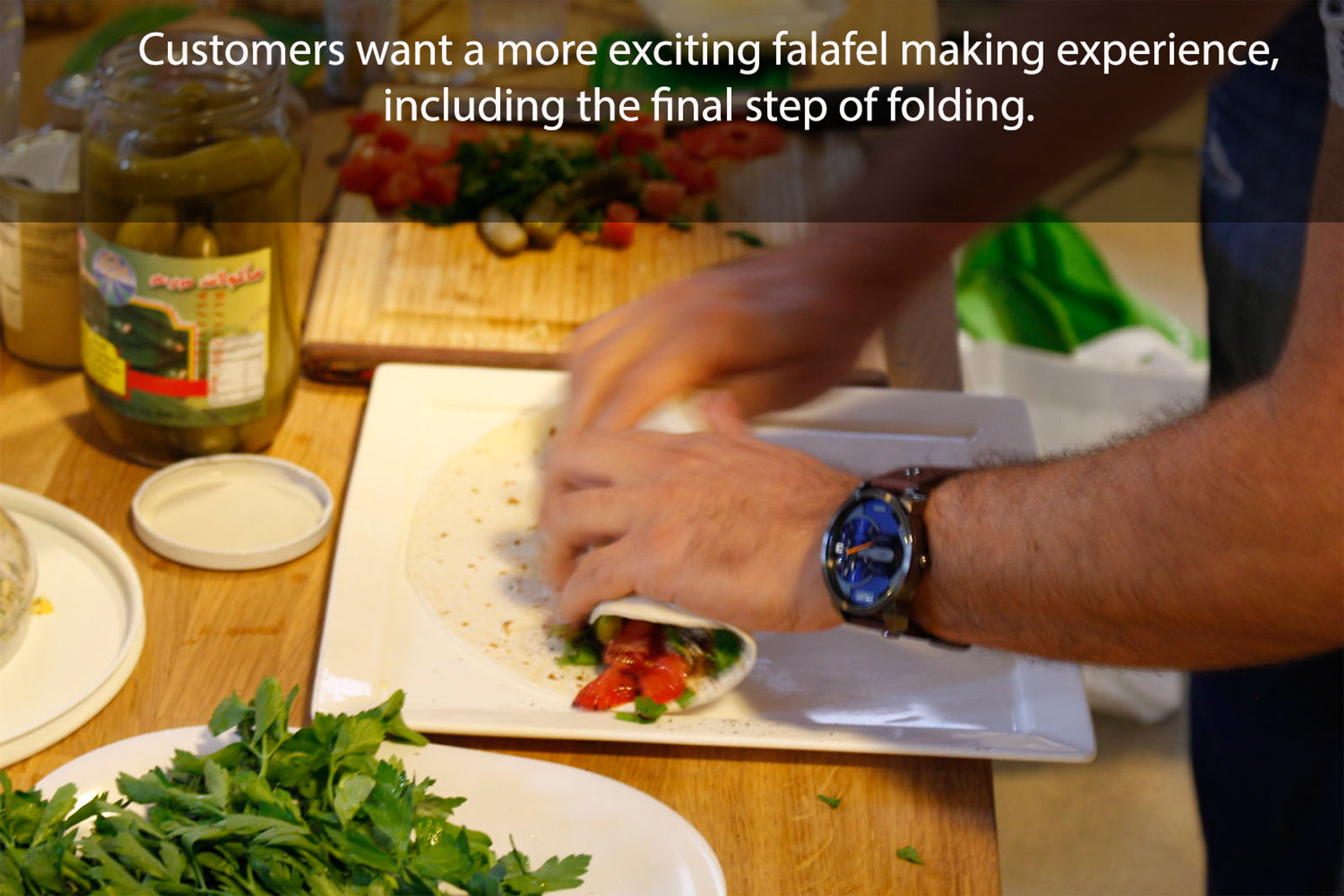 As a studio, we were tasked with building an automated falafel cart. Furthermore, our group was tasked with creating an automated folding mechanism. The mechanism had to perform three specific folds that would make the open sandwich a wrap: a left fold, a smaller back fold, and finally a right fold. Our other objective was to wrap the falafel in tin foil.  Our solution was to move the wrap back and forth across a stationary, fluted, curved ramp that would take the edge of the bread and fold it in. The wrap will move via a plate that is attached to a track that runs beneath the upper level, a.k.a. within the box. To make different folds with a stationary ramp, the plate will rotate 90 degrees using a gear attached to the rod and a few teeth attached to the underside of the upper level. This mechanism will serve two purposes; not only will it fold the falafel, but it will also fold the wrap in paper by running it through the machine again.

Even though folding by hand would be more efficient, we are not aiming for efficiency in this machine. We want to make an automated system for folding that looks interesting, and can serve as an attraction for the cart. After all, this is the final step of the semi-automated falafel process, so we wanted to end the show with something mechanically compelling. Our folding machine works by using a plate to drag the edge of a lavash bread up a curved, sloped ramp, so that the edge of the ramp gradually brings the edge of the lavash to the ⅔ mark. Then, a gear fixed to the rod is turned 90 degrees by a strip of teeth on the end of the track. Because the track is ovular, the lavash is now folded 5 cm shallower. It then turns around once again to make the third fold on the other side (another ⅔ fold). To wrap the falafel in foil, this process is repeated again, but with paper underneath. A person will both operate the plate with a handle, which is attached to the rod fixed to the plate, and place the paper under the folded wrap.Compared to former projects we have worked on, this mechanism has gone through a lot of changes. Over the course of the folder’s development, we have fundamentally changed its design several times, and have talked about fundamentally changing it many more. We listed three iterations, but in reality, those versions are just major turning points in a vast network of small iterations. The track that guides the plate has redesigned many times. The rod has been held by all sorts of sockets with bearings, and our final design does not include a socket. Everything from the turning gear to the size of the box has been changed at one point. The only thing that still remains from the original design is the ramps, and even they have had their shape changed twice. Even though making all those changes was stressful, (especially the changes made a day before the deadline) I believe we had a great process. Every change we made led to a deeper understanding of our mechanism and our vision for the mechanism, and a deep understanding of those things is essential, especially in a mechanically intensive project like this.

If we were to continue working on this project, our next step would be to use a bristle like material to make it easier for the plate to rotate and turn, hopefully eliminating the need for gears. We would imagine the bristle materials would help prevent crumbs and falafel remnants from falling down into the box. We would also look to use materials such as stainless steel instead of wood as we need a material that is “food safe”. Finally, we might look to create an even quicker folding mechanism that does not need to go around the track twice.