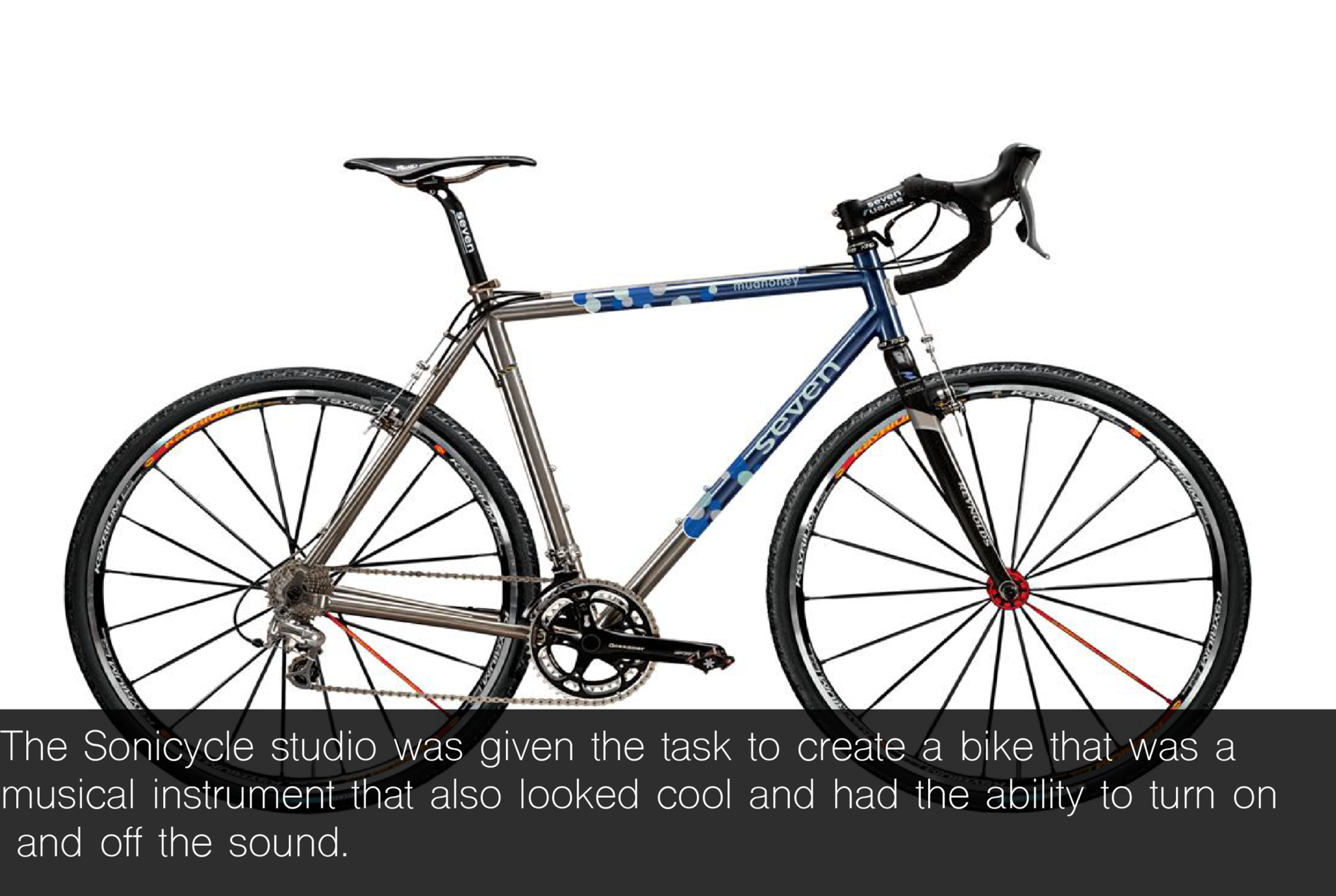 The Sonicycle studio was given the task to create a bike that was a musical instrument that also looked cool and had the ability to turn on and off the sound.

Our group created a bike that when rode makes noises because of the number of instruments, but can also make music when it is stationary. A big part of our process was using our new skill welding to attach the instruments to our bike.

Our bike has a variety of instruments such as a drum, a thumb piano, wind chimes, spoke sliders and a wheel clacker. This allows the rider to enjoy music while riding and make music when they come to a stop.

We began the project by researching how instruments are made and how to make your own, then we looked at how people had combined instruments with bikes to make music. We spent about a week working on our own instrument and creating new ones. Our group then broke off into four groups to focus on their individual instruments to attach to the bike. While we were working on our instruments we also did lots of practice welding.

Our bike is made up of many parts because of the various types of instruments. The drum is a gear with a plastic circle screwed to it that also has a hand-brake that doubles as a mallet to hit the drum and make the sound. We have the wind chimes that are attached at the top tube and when the bike is ridden the hit each other making sound. The spokes sliders move up and down the spokes when the wheels turn making sounds, but also make really cool designs because of the centrifugal force. The thumb piano is welded to the handlebars and has a bar the stretches across the wooden box. The bar holds up levers with screw on the end and when you press them, they hit the keys, resulting in different notes from a scale being made. Last is the wheel whacker which is a piece with bike chains at the end. This is connected to a bike rack that has the ability to be raised or lowered resulting in the wheel being whacked and sound being made.

Each of us broke off to work on instruments that had already been prototyped or others had created and we improved them. We originally began with the idea of only being a percussion bike, but then we went off of that idea and ended up with instruments like the thumb piano. As a group we also spent lots of time on finding ways to make the whole bike an art piece and not just the music that was coming out of it. We focused on using pieces of the bike for completely different purposes and making it unique.

One of the main challenges that we faced as a group was working as a group. Because we were working on very different projects, it was very easy to go a couple days without communicating with everyone else. This became a really big probably though by the end of the project because people were wanting to put their instruments in the same place or projects not getting done because people didn’t know what others were doing.