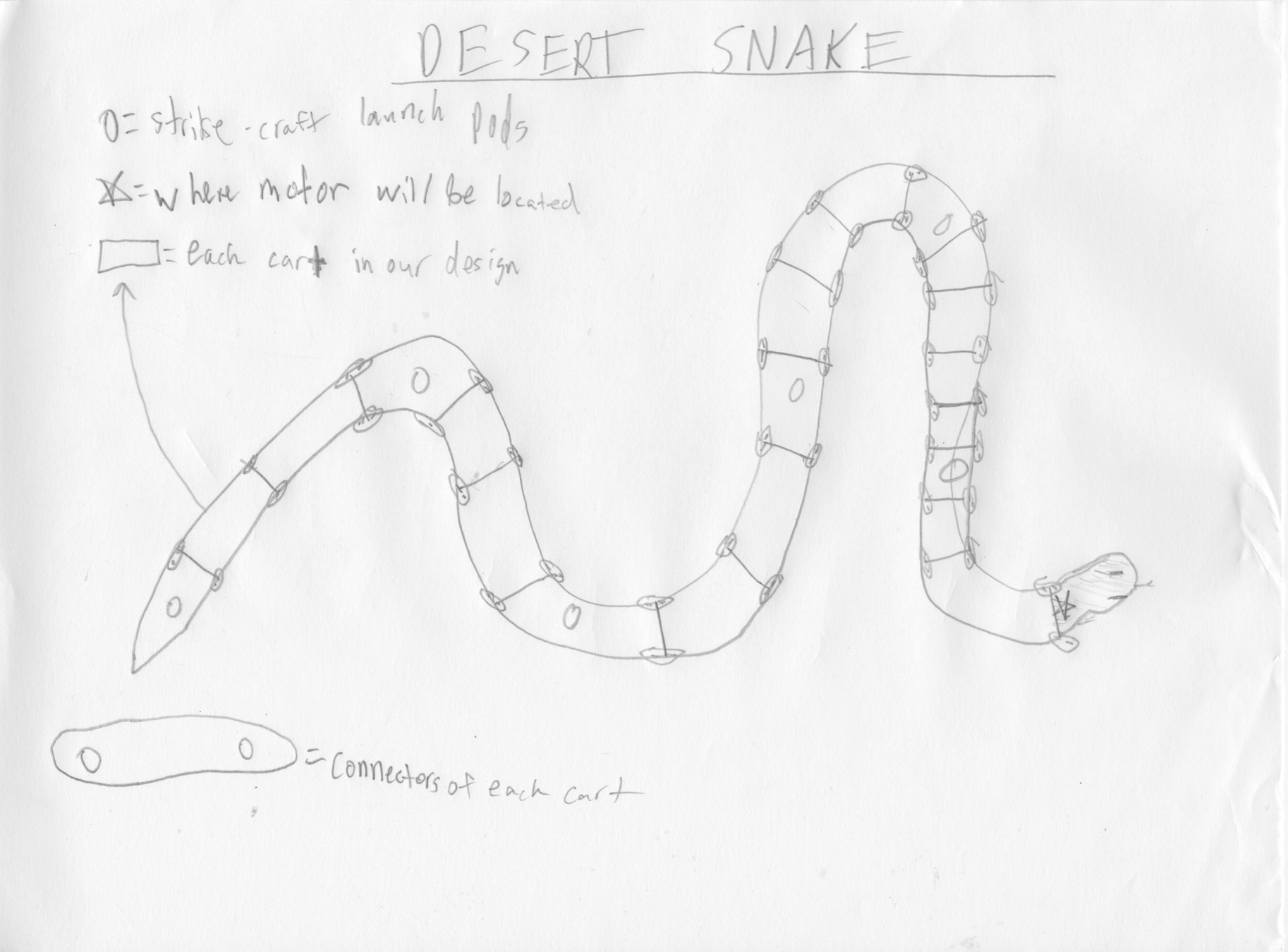 In a world where humans are isolated and live hundreds of miles apart in oases in a worldwide desert, it became necessary to find alternate means for communication and trade. There are many challenges in traveling through the desert, such as the notorious sand pirates who make a profitable living from robbing caravans of goods. To circumvent this, the armored train "desert snake" or "desert viper" was invented. It's outer carapace makes it very hard to breach from the ground, and its winding pattern makes it even harder to hit from the air. In addition, cars cannot be separated from each other, making sure that they cannot be divided and taken down individually.

One of the first challenges we faced was the weight of the train, particularly in the driving cars in the front and the back. This forced us to use larger and heavier motors to pull the cars, and thicker axles to ensure that the weight of the driving cars could remain in suspension. A bent axle could be fatal in an encounter with pirates, slowing the train and allowing it to be captured or destroyed.

Our very first iteration did not have wheels, much less move. This iteration was designed to test different styles of connection between the cars. Initially, we thought motors with reels connected to the exterior of each car could use rubber bands to pull and push the cars in front and behind into the winding motion necessary for our design, but this design was impractical, as it would require motors attached to each car.

Our second iteration was an attempt to create a drivable vehicle, but that was around the time we were forced to switch to heavier motors, and we found that the motors holes we had cut out were not large enough, and were forced to recraft our design.

In our third iteration, we added circular wooden wheels that could touch the ground, and bigger cars that were connected to each other by rectangular wooden sections. Now we had motors, however we found that the wheels we had created gained no friction on the wooden surface of our table, much less a sandy desert. Another problem was that our cars were too large, and wasteful of materials. We planned to have a larger number of smaller cars rather than a smaller number of larger cars. That way, we could produce a smoother winding motion in the overall train.

In our fourth iteration, we fit rubber bands around our wheels, and made the cars smaller. We also put ball-bearings on each car to allow them to move horizontally from side to side as well as forward and backward. Since cars would not be equipped individually with motors and wheels, they did not need to be self driving, part of the advantage of having a train instead of a caravan. We were also forced to elevate the car connectors, as their rotation was being blocked by the knuts connecting the ball bearings to the cars.

On our fourth iteration we added a driving car in the rear of the train, as well as in the front, to produce the curving motion we needed. The only problem was, the front car was very open and vulnerable. As demonstrated in our fourth picture above, fire would be an issue to a train not constructed of metal. To meet this end, we printed our front car in a different material in 3d, making protected compartments for the electronics required to drive the train.

After we printed our front and back cars, we distributed the electronic components along the train. The micro computer programmed to imitate the motion of a winding snake, along with the receiver allowing it to be remotely controlled was placed in the front driving car. The 9v power supply was placed in the back. The two essential components were connected by wires running the length of the train. Our final iteration was our first iteration that was drivable, and it worked just as expected.