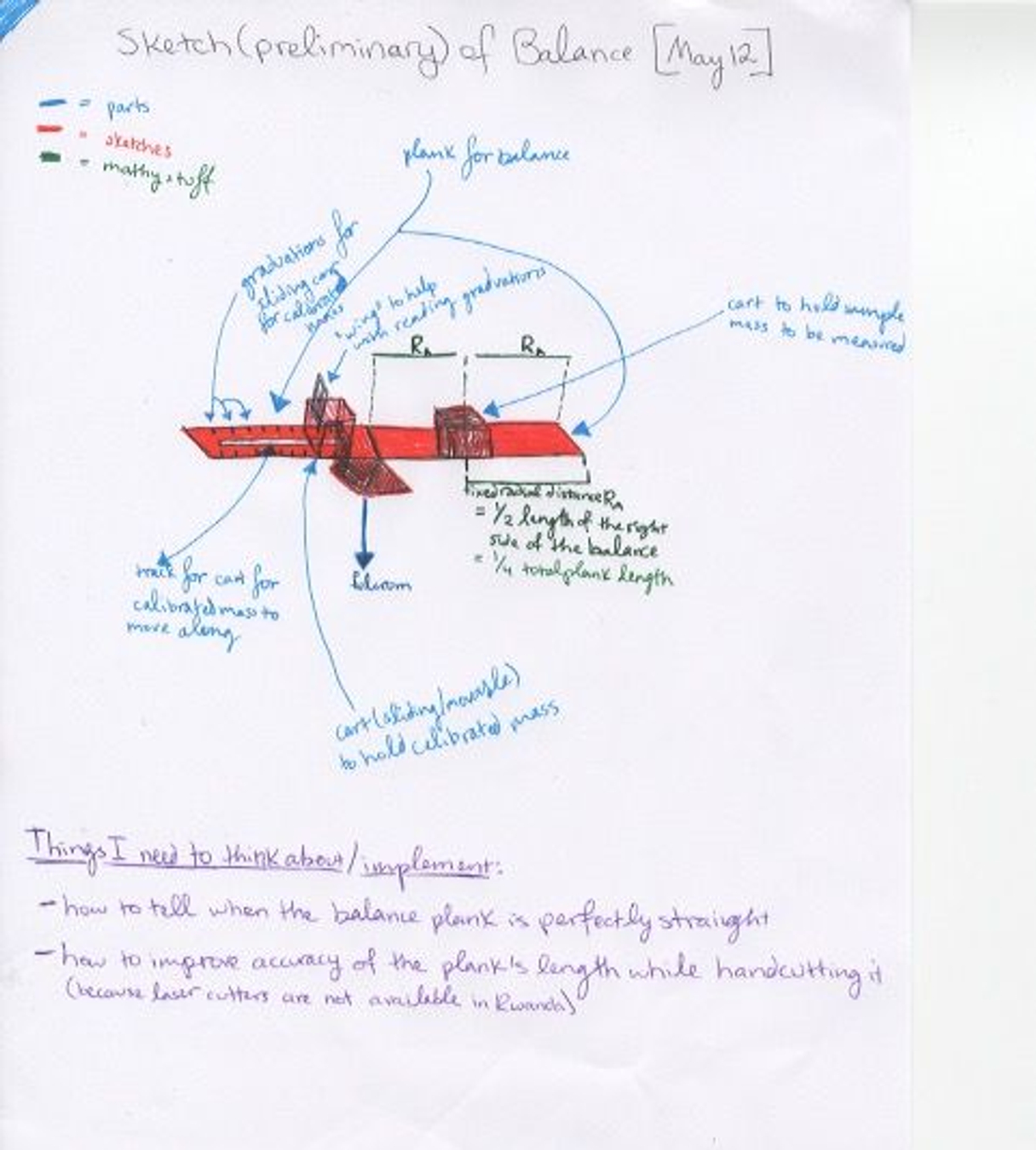 Kepler University, located in Rwanda, is a relatively new private university that has partnered with MIT in order to further its students' education. Unfortunately, in Rwanda, science equipment is rather hard to come by, and when it is available, it is very expensive due to fluctuating inflation rates. Thus, MIT took on the challenge to create DIY science equipment for the students of Kepler. One of the most common-- and the most important--laboratory instruments is a precision balance. I chose to create one from easy-to-find materials for the benefit of the Kepler students.

The first iteration of my balance is a simple balance with some upgrades. Like a normal balance scale, it consists of a plank with a fulcrum in the center. However, the left side of the plank has a track in it for a cart to move left and right. This is to even out the torques of the two masses on either side. This iteration was modeled on a picture of a balance that does not have the problem of a plank balancing on a 2-dimensional line, which would be the case if the fulcrum were a perfect right triangular prism. The model for this iteration had a toilet paper roll stand, with a pencil for the fulcrum (the friction produced by the pencil was very large and very inconvenient), and a toilet paper roll for the balance plank. A track was cut into the roll and a piece of cardboard, glued to another piece perpendicular to the first one, was place into the track. The friction on the track was also an obvious problem.

This iteration of my balance was a slight renovation of the first iteration. A toilet paper roll was used for the stand again, but this time it was reinforced with even more cardboard. Instead of using a pencil for the fulcrum, I used a screw that started out smooth and cylindrical but then tapered to become serrated. This reduced the amount of friction between the balance “rod” and the fulcrum. I also used a CD cover for the base, which allowed for a small amount of stability, but not as much as desired. For the weight-system side of the balance, I used two L-shaped supports as the basis of the system. A threaded rod went through the top hole of each L-shaped support, and was held in place with a nut on either side. Several nuts were placed onto the threaded rods (to be used as calibrated weights) before fixing the rod in place with end-nuts.

First, I chose a metal bar for the balance "plank". This metal bar was aluminum, so it was pretty easy to drill through, as opposed to, say, steel. Then, I found a large cuboid of wood, which would serve as the support for the balance. The balance is situated at about eye level for a person seated on a relatively medium-height chair. Originally, the bar supports were supposed to be L-shaped and made from steel-- however, I found right-triangle-shaped supports that had two holes, evenly aligned, and made from some type of alloy. They were actually a little bit heavier than the L-shaped ones but that seemed to be fine, since these are much more supportive than the L-shaped ones. Then I obtained small Tupperware cups to use as the stationary box for the un-calibrated mass. I drilled a hole in the bottom of one of the cups so that I would be able to affix it to the balance rod. I drilled holes for the M5 screws to hold the support system to the balance. Then, I screwed in the supports and put a threaded rod through the holes. I rolled on a few nuts to act as weights for the threaded rod. After that, I drilled a hole through the wooden cuboid, and cut it down so that I would have a support for my balance rod. However, the weight system (with the supports and the threaded rod) proved to be extremely heavy, so I fixed that with the following modifications. I cut down a thinner threaded rod to the correct length (11 inches) for my system. Then, I replaced the really heavy and long M5 screws, which were 60mm, with much smaller 40mm screws. This reduced the amount of weight accumulated on the weight-system side of my balance. After that, I replaced the supposedly "more supportive" triangular supports with lighter L-shaped ones that were smaller. This further reduced the weight on the weight-system side of my balance. In the end, I found that the entire weight system, including screws, weighed near 80 grams. This was much smaller than the original 100-ish grams of the previous weight system. Now, I realized that the cup on the other side of the balance was far too heavy. I decided to drill more holes in the balance rod to allow for more flexibility with the un-calibrated mass's torque. Also, I reduced the number of nuts that were screwed on to the end of the screw that holds the cup in place on the rod. This finally allowed my balance to actually...balance! The balance happens to be very sensitive to changes in torque--the nuts on the weight-system side of the balance would tip the balance either way if they were moved even a few threads left or right. Though this increases the accuracy of the balance, it is slightly time-consuming to move the nuts back and forth. However, this balance had no base, so I added one. The base was a set of four small planks arranged in a spiral shape to stabilize my balance. Also, I designed a ruler for the calibration system in Rhino. I laser cut the ruler that I would use for calibration. Then, I glued it to the weight-system side of my balance. However, this offset the balance of torque between the two sides of the balance, to the extent that I was not able to remedy this simply by moving the nuts on the threaded rod. Thus, I added two more nuts to the screw holding the Tupperware cup in place, and that solved the problem. My balance is finally finished and functional!