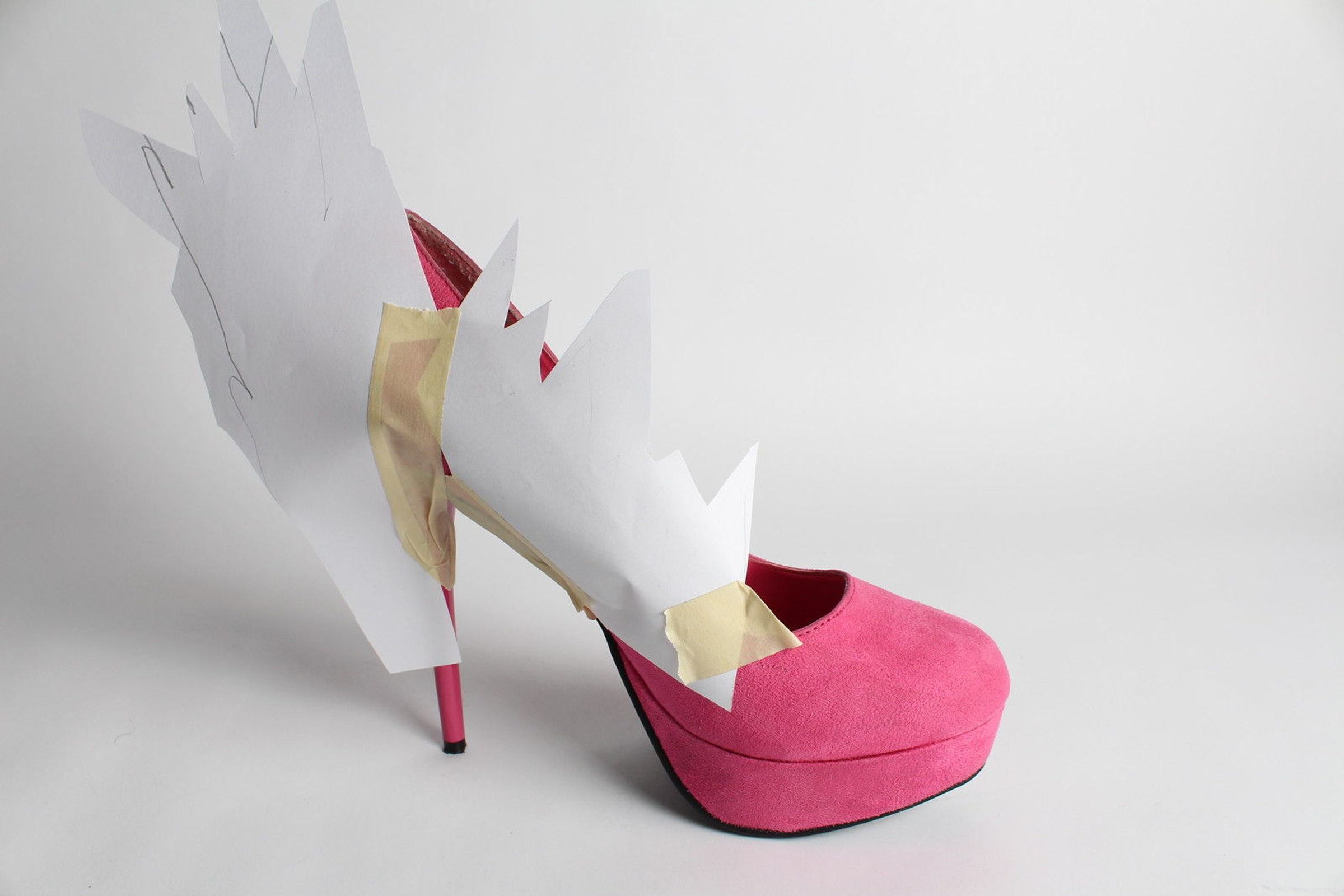 This studio was partnered with New Balance to develop a new, adaptive shoe. We started off by learning about shoe innovation. After coming together as a group, we brainstormed to the point of choosing to work on a kinetic shoe. Specifically, we wanted to make a shoe that uses the energy of walking and somehow changes with that energy. Originally, we experimented with the harnessing of walking energy. When someone walks, they typically start by putting the heel down first, and then transferring weight first towards the ball of the foot foot, and then to your toes. In a lot of shoes, your heel comes off your shoe completely as you walk. We wanted to use this heel motion to power the movement of the shoe.

The fireplace bellows was also an inspiration for this mechanical design. Our first prototype was based off the goal that when your heel is up and off the shoe, a spring pushes a button up, and then when you put your heel back down it pushes the button down. We wanted to turn that button into a sort of bike pump mechanism, so that as you step it builds air up and blows up a sculpture accessory, and then the air lets go all at once through the sole of the shoe and cools your foot down.

We also explored designs that inflate with each step. "We have the air, so let’s see what we can blow up", so to speak. And we started to look at other forms of power in place of a pump. We investigated springs and shocks. With the air pump element, the shoe is required to be sealed, which adds a different level of complexity.

After all this exploring that happened in the space of a couple days, we decided that the blow up air pump idea was simply not enough of a project—too obvious of an idea and just overall not a strong enough design. We set off brainstorming once again. Thinking of the shoe as only air powered and air pumped put us in a corner for brainstorming, because it shut our minds out to other options. We finally got back in the swing of brainstorming when we thought of origami. We were talking about the "blow up" shoe idea to our coaches and New Balance employees and described it as a shoe that can breathe. We then bounced off the breathing idea and thought, “What if we have a shoe that actually breathes?” We came up with this idea almost mocking the constant advertisement of shoe companies that say they have “shoes that breathe”, which really means that their shoes allow air to cool them down.

We did a fair amount of research, bouncing off the “origami and shoes that breathe” idea. We found some 3D origami patterns that expand and contract. We thought, “What if we could put this pattern on the side of the shoe so as you walk it expands and contracts with the movement of your foot inside the shoe, using the same lifting of the heel concept as the blow up shoe?” Stylistically, with the origami pattern now being breathable, there would be different parts of the shoe that are seen at different times. The origami will be in between the expanded and compressed stages, depending what part of the walking cycle your foot is currently in.

When the origami is compressed only one surface will be showing, which would mean the shoe could simulataneously be one unified color, and a mosaic of colorful, fragmented explosions occurring between the planes. The shoe could appear to pulse, in a way, with every step to form fit to your foot. Obviously, we did not want to make a shoe out of paper. We wanted the main plane, which is seen when the shoe is compressed, to be made out of one material, and the colored plane, when the shoe is expanded, will be made from another material.

Upon first experimenting with origami patterns, we were drawn to that of the water bomb. We found that Grasshopper is quite a good program for origami, and is actually often used to create origami patterns and shapes. We sat down and started to slam out the mechanism to try and figure out how we can get our shoe to “breathe.” We went back to the heel-powered/stepping motion concept. Our challenge was that we needed the shoe to expand to get the origami to move, a problem presented by the two-axis construction of water bomb origami.

We decided to add a hinge into the sole. This way we can allow the shoe to function like a flip-flop but possess a more stylish and versatile design. We are thinking of the sole in two parts, the toe sole and the heel sole. The foot is going to stay secure to the toe sole and the heel sole will flop as the person walks. The toe sole will have to connect to where the foot fits into the sneaker, so that it can keep the foot inside of the sneaker. If the toe sole doesn’t connect to the top of the shoe, there will be nothing holding the person’s foot in place, and they would walk right out of the shoe. The ankle connection to the toe sole is crucial to stabilizing the shoe.

To ensure the consistent flip-flop motion (and thus, the breathability component), we added a spring. The spring connects to the ankle brace and the heel sole. This allows for the shoe to expand and compress as the person walks. And as we dove deeper into the project, we realized we need to change certain aspects of our design, one of which is the origami pattern. The water bomb origami pattern that we were using needed to be pulled in two directions to expand and contract. We realized that this wouldn’t work for our shoe because the heel is only going to be pulled in one direction. Essentially we needed to make a glorified accordion fold. We worked on creating our own original accordion fold patterns, and explored how we might get them to fit around the shoe. As we experimented, we realized the folds in the patterns we were using never completely shut. We planned on having the origami pattern open and shut, thus appearing a different color depending on whether the origami was open or closed. We considered making the origami smaller, to make it easier for the origami to open and close and we will still get our color variation.

In the end, our shoe ended up splitting into three main parts, the sole and mechanics, the 3D printed heel, and the fabric that makes up the rest of the shoe.

Making the fabric part of the shoe was all done in Rhino and laser cut. We designed the shoe flat so that we could then sew it together to create the 3D. The shoe is made out of three main design layers, a base and two more layers to make it look attractive. We laser cut each layer out of a different material then placed them on top of each other to sew together. We ended up needing two extra layers of felt on the base just to keep the shoe stable and together.

The upper part of the shoe is 3D printed. We designed it in Grasshopper, and purposely made it noticeably different but still similar to the origami pattern. It consists of a triangulated texture gradient, which essentially means it consists of isoceles triangular prisms that get more intense as it wraps around the shoe and then gradually smooths back. Unfortunately, for some reason this component and the hinged sole were 3D printed in a bright blue, rather than the cherry red we had specifically picked out to work with the fabric color scheme. But overall it was a successful and functional project.