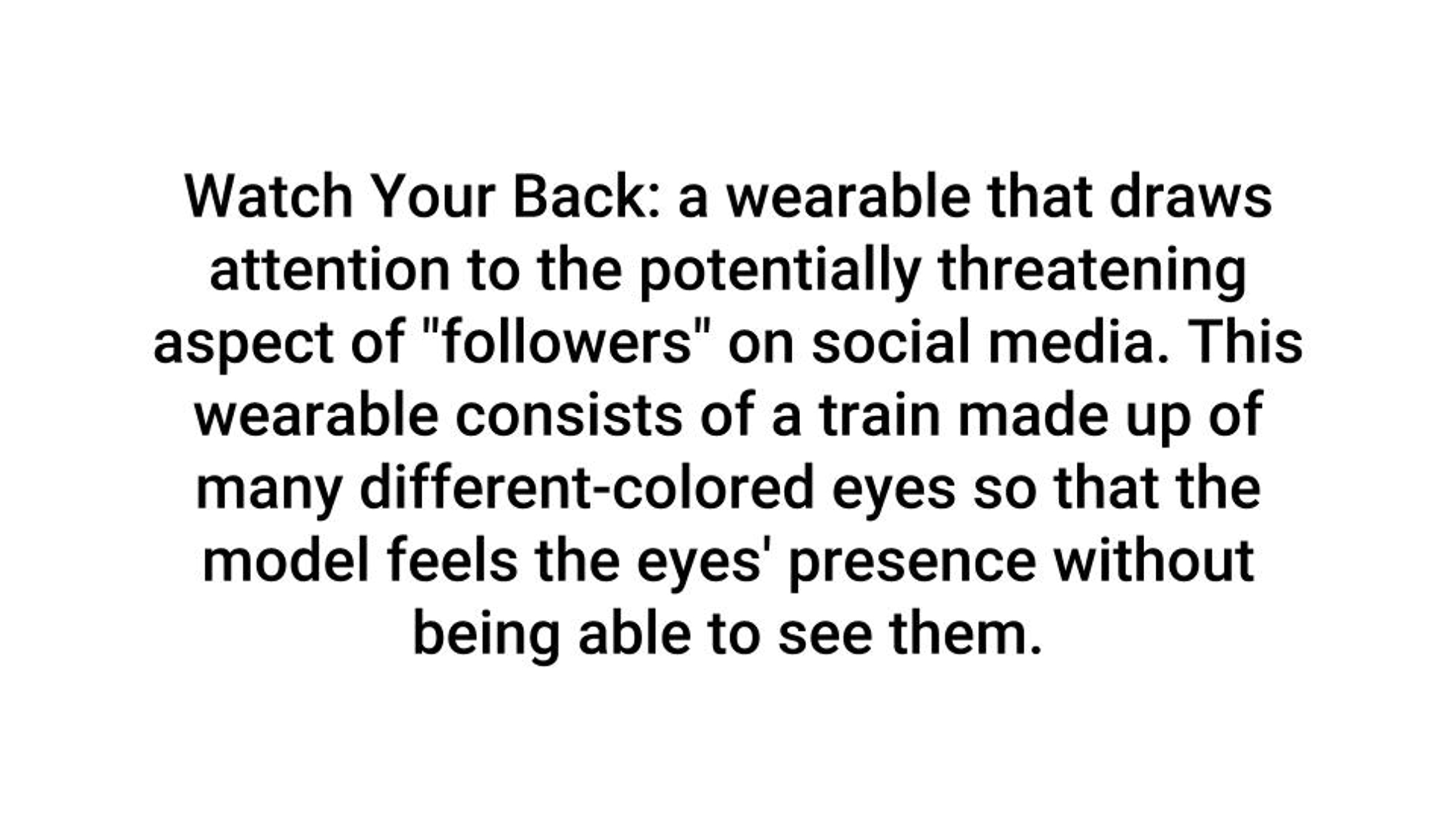 Watch Your Back: A skirted belt covered with weighted eyes to represent the emotional toll social media can take on an individual. The model wearing the outfit cannot see any of the eyes but can feel their weight.

Watch Your Back is a wearable designed to highlight a negative aspect of social media: the spawning of people who stalk "influencers," those who make their careers advertising certain products or outfits on social media. The street artist named “I <3” talks a lot about online stalking in his collection named “A Sign of the Times,” particularly in the piece “Follow for Follow”. This piece shows a woman smiling, looking at her phone, with a bubble above her head saying that she has two new followers. Behind her, two genderless people wearing all black and hoods represent these "followers" in an ominous light. The skirt Watch Your Back aims to replicate the chills people get from looking at this art. The outfit consists of many eyes stitched in a unique pattern that makes a skirt hanging down from the back of a simple black belt. Each eye's pupils are a unique color, created by filling the eye-shaped laser-cut wooden frames with different textured fabrics peaking through. Originally it had two pieces of wood sandwiching the fabric. In the final iteration, the eyes only have one piece of wood with rowlux covering the back. These eyes appear to watch and follow the model. The goal is to make this person appear and feel vulnerable the way social media often can.

Watch Your Back: a wearable that draws attention to the potentially threatening aspect of "followers" on social media. This wearable consists of a train made up of many different-colored eyes so that the model feels the eyes' presence without being able to see them.

Watch Your Back is designed to address the effect of social media "followers" on the average person's mental state and social life. The eyes are made of laser-cut frames filled with pupils of different textiles and finally, laser cut Rowlux film to add to the visual effect. There are wooden pieces attached to a belt that acts as a frame for the piece, and the eyes are attached by using clear string and tying them together with small holes. The accumulated weight of the wooden eyes represents the weight of media attention can have on someone's livelihood. The inspiration for the wearable originates from a street art piece created by an artist named iHeart, whose art aims to draw attention to the negative aspects of social media. In his piece "Follow for Follow", a woman is depicted as excited about two new followers, but the background image suggests that she is being physically stalked by two hooded figures. To make a similar point, that the intent of social media followers is unknown and can be threatening, Watch your back uses eyes to highlight the creepiness of being watched by so many people who can't be seen in turn.