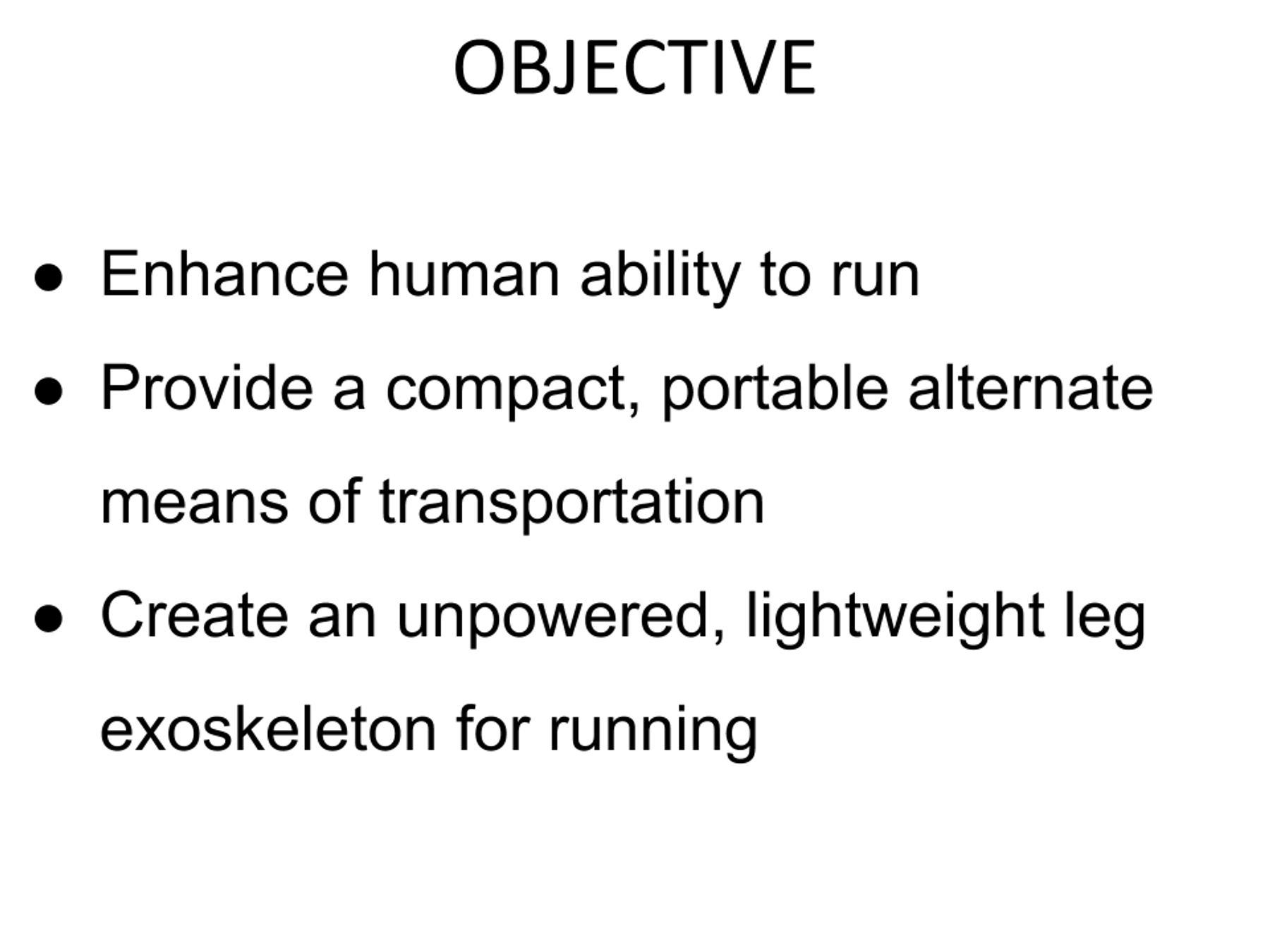 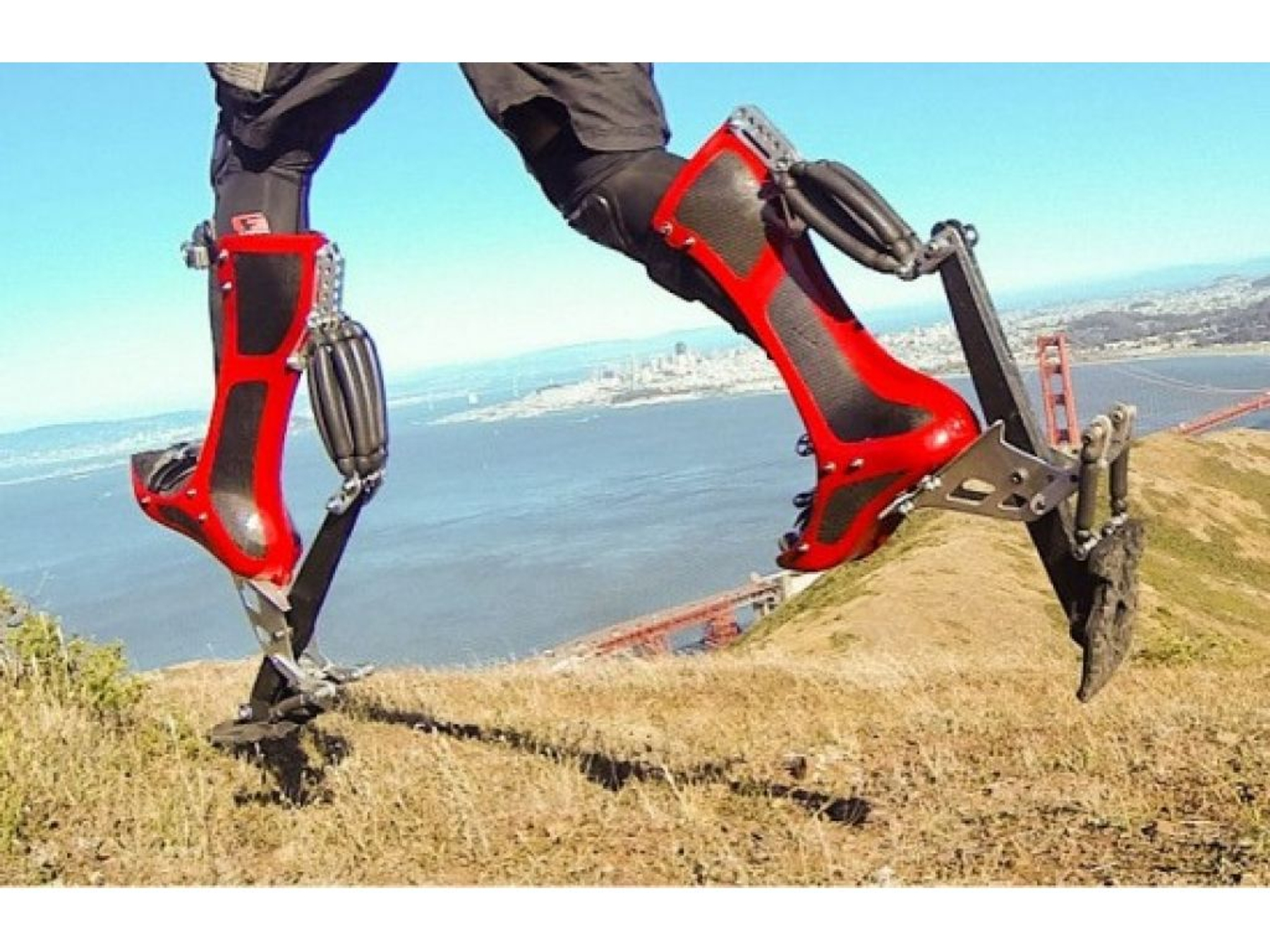 The objective of this project is to enhance heel-to-toe running by increasing energy efficiency and speed. This is achieved by using a spring to absorb otherwise wasted energy when the heel strikes the ground and release it in the step off, as well as a curved bottom to facilitate heel-to-toe motion. Human feet are designed for standing and walking, but are very inefficient for running. I wanted to create an attachment to the leg that would make running fun by increasing one's speed and endurance. The spring below the heel absorbs the energy when the foot hits the ground, which reduces stress on the shin which would otherwise absorb this energy. After the heel hits the ground, the curved bottom rolls the foot into position for the push off, being in a more efficient shape for heel-to-toe motion. Once weight moves from the heel, the spring expands and pushes the bottom from the foot, aiding the user in pushing off the ground.

The original design of this project was a brace that would allow one to wear athletic prosthetics without being an amputee. It would also feature an elastic knee brace. Due to the cost of the athletic prosthetics, this design was not feasible. The idea of a curved, springy bottom stayed and the elastic knee brace addition was scrapped. Although we could not procure an athletic prosthetic, we did have non-athletic ones available. Thankfully, there was a curved piece in those prosthetics which was appropriated into the design. From there, a spring and hinge were attached to the prosthetic. We were unsure of what to put above the prosthetic, but conveniently there were leg cast bottoms which were not going to be used. When attaching the two layers, however, a spring holder needed to be designed and the hinge needed to be attached using more secure methods.

One challenge was attaching the spring. The springs that I had chosen to use were too long, and needed to be cut. This would leave one end unflat, and make it difficult to attach at the right angle. Originally I tried to put a 3D printed piece inside the spring at that end, but broke it when testing the attachment. A second 3D print was made that would go both inside and outside the spring and feature a thick base. This worked, but unfortunately shortened the compressable length of the spring and altered the angle between the cast and the prosthetic.

Another challenge was attaching a hinge to the prosthetic. There were no holes for screws at the front end, and because it was made from carbon fiber, even epoxy could not attach the hinge to it. With the help of Sotirius, we drilled screw holes into the prosthetic and screwed in the hinge. This caused the screws to stick out a bit on the other side, so a dremel was used to smooth the protrusions.

The first iteration was created while we planned to use athletic prosthetics. Because these prosthetics would add at least 26 cm to the wearer's height, special wooden "sandals" were created to experience the height increase. Between the top and bottom of these "sandals" was an extruded cross which made the whole creation very stable. Rubber bands were used to secure one's feet to the "sandals".

The second iteration was simply two pieces of cardboard taped together on one end with a spring connecting the two on the other. Again, a rubber band was used to secure the wearer's foot. This iteration was created to test putting a spring in the heel.