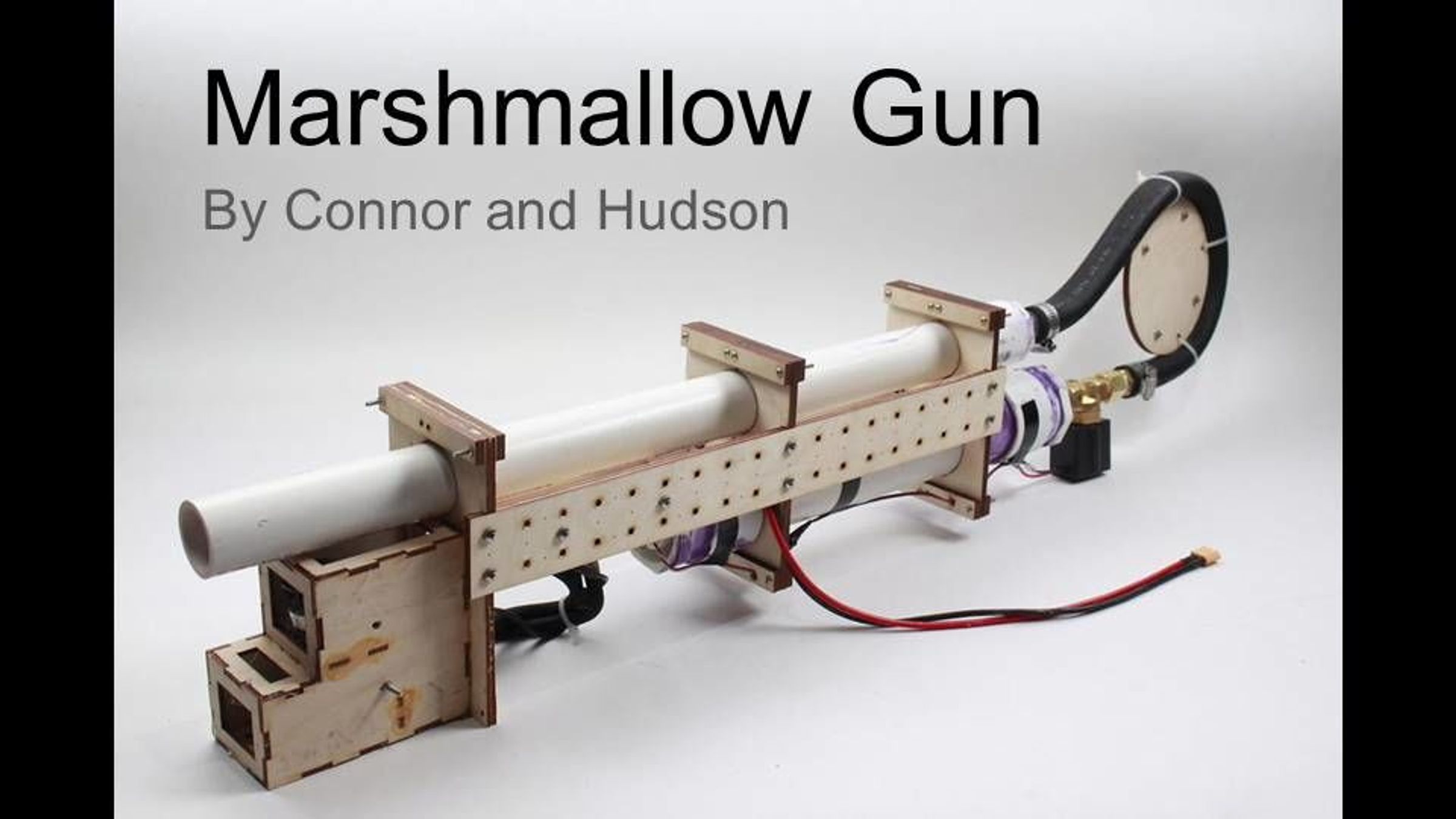 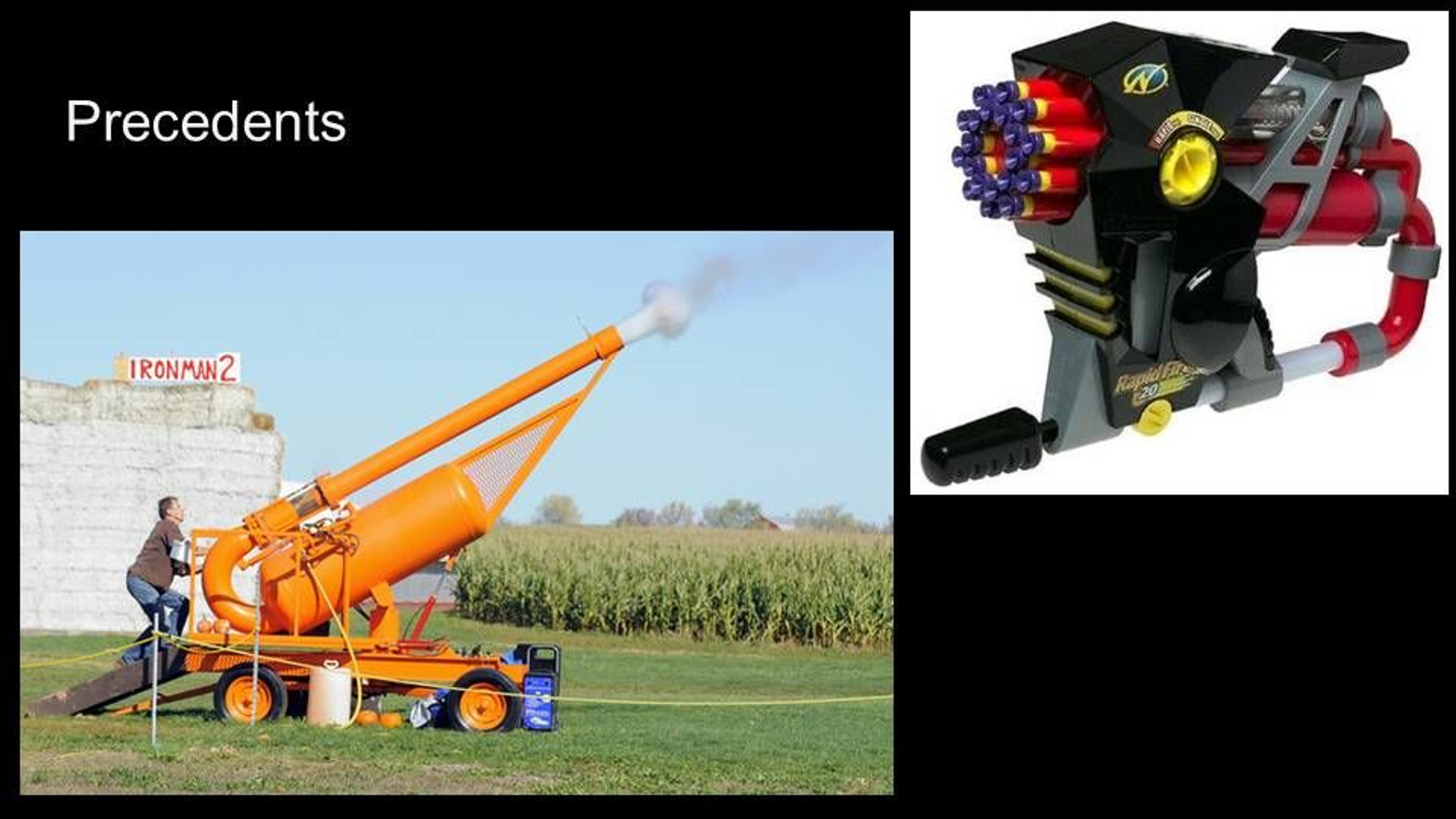 How Does Your Project Work: Our project works by an air compressor that is controlled by an Arduino which fills a PVC tank up with about 80 psi worth of air. Then a valve on the other side of the tank is triggered by the same Arduino and quickly releases the compressed air into the tube. The Air then travels around the tube to the barrel where a marshmallow or other projectile is rammed into like a musket. The air packs behind the marshmallow and pushes it out causing it to shoot with no fire or loud bang.

Progression Of Project: We both worked separately on different things, but we spent the first couple days brainstorming designs and finding basic parts for us to use. Then we settled on our PVC pipes and the length of the barrel is 1 ¼” by 2 ft long and the tanks is 2” by 8” long. After that we bought an electric air compressor from amazon for $20. Once we decided a rough Idea on how everything was gonna work we started building the clamps to hold the barrel and tank together along with researching what valves to use to connect everything. While the clamps were being worked on and the valves were on their way to NUVU we made a box to keep the compressor in and make it easier to connect to the barrel. Since the Arduino only takes 5 volts, our valve took 24 and the compressor took 12 volts, we had to make a breadboard with relays to control both parts. Then after everything got assembled the back tube was a tad short. That meant we had to distribute the curve so the tube wouldn't kink. That's how we came up with the big wooden circle that is zip tied into place. Then the final steps after everything was on was to download the code into the Arduino and mount it onto our main shell.

Technical Design Flaws: Some of our flaws were the fact that we used a big tube on the back instead of just using brass valves. We also bought to weak of a valve and had to jump to one that took twice the amount of voltage. Another thing we could of did for more power is made the tank with 3” by 8” PVC instead of 2” by 8”. It would have given us more air to pack behind the projectile and would come out with more force.

Challenges, Modularizing the Air Compressor: It was very important to have a container to house the air compressor because it would be very bad if one of the compressor’s moving parts came in contact with anything. The air compressor we bought came in a plastic casing, but it was bulky and was made mostly out of empty space. It also contained a flashlight, which was an unnecessary waste of space. We wanted our gun to be as compact as possible, so we unscrewed the air compressor and took it apart, separating the actual air compressor part from the unnecessary parts. Next I measured the dimensions of the now bare-bones air compressor, which proved to be more difficult than I anticipated because most of it was made up of strange curves and gears, and it was not all on the same flat plane. Once I got down the basic outline measurements, I roughly recreated a more box-like version of the shape in Rhino. I made the dimensions slightly larger than those of the compressor so I could be sure that there would be no contact between the wood and the moving parts. Once I got the shape down, I made some supports that would attach to the floor and ceiling of the box and would serve to hold the compressor in place. When I first started making the walls of the box, I knew that they should be more like a frame rather than a solid wall because we needed room to run the wires through and we needed to be able to see what was going on inside. A frame with a large hole in the middle would also improve airflow to prevent it from overheating. At first, I thought that a narrow frame would not be sturdy enough, so I made beams crisscrossing across the hole in my first iteration. I also made every face of the box tabbed so they would fit together better. I laser-cut this iteration out of cardboard, but unfortunately the beams did not leave enough room for the wires. I also realized that these beams didn’t do a whole lot to make it more sturdy, so I decided to remove them altogether in my next iteration. A few more iterations and small changes later, I had a prototype made out of thin wood. The air compressor fit well, but the supports were not enough to keep it from being jostled out of place and the hole I made on the ceiling to show the pressure gauge was in the wrong place. I fixed both of these problems in the next iteration by moving the hole in Rhino and widening an unused screw hole in the compressor with a drill. I drilled a hole in the floor of the box and ran a screw through both holes, securing the compressor to the box. Then I integrated Hudson’s clamp design into one of the walls and secured it to rest of the gun, finalizing the box.