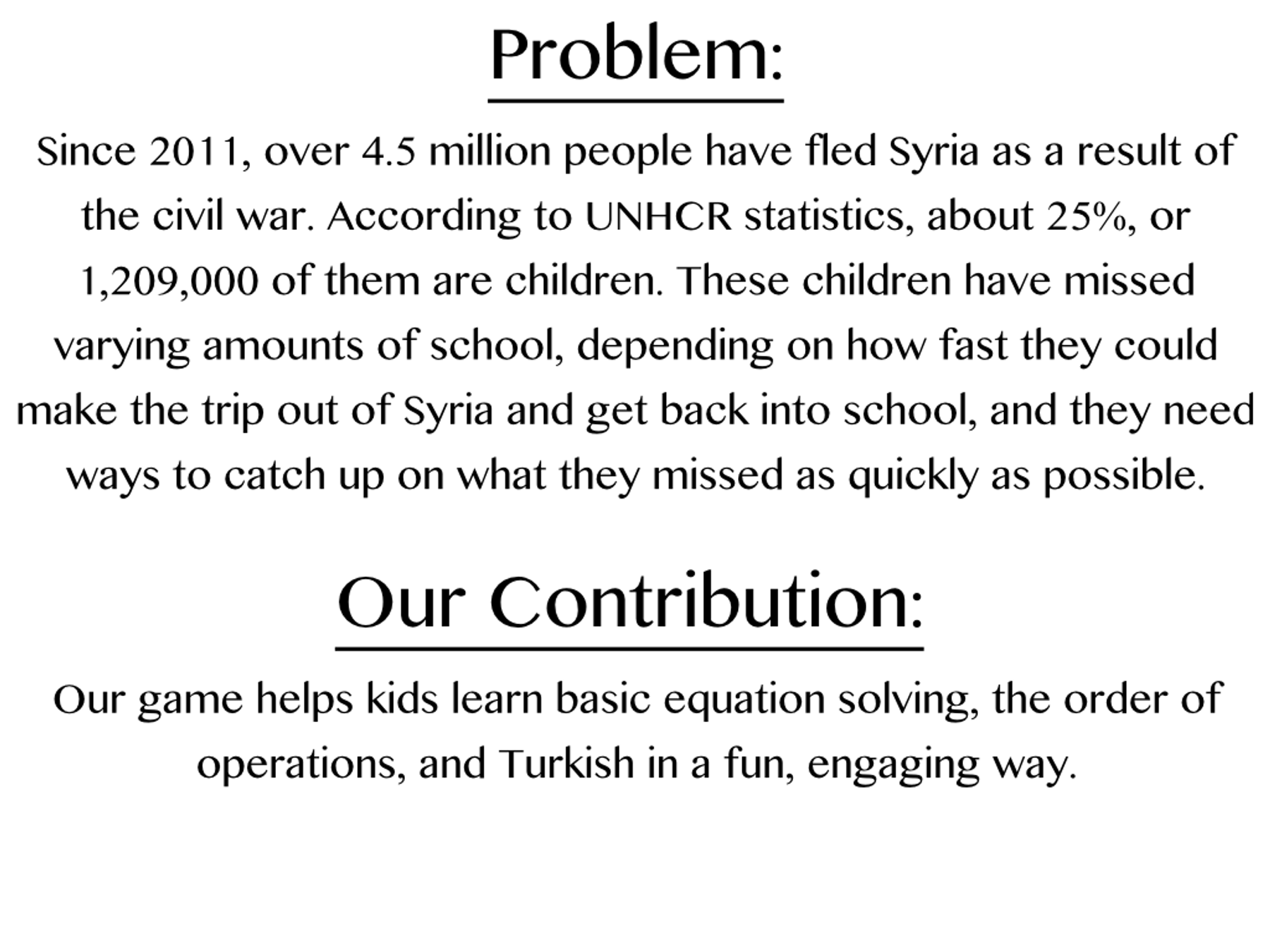 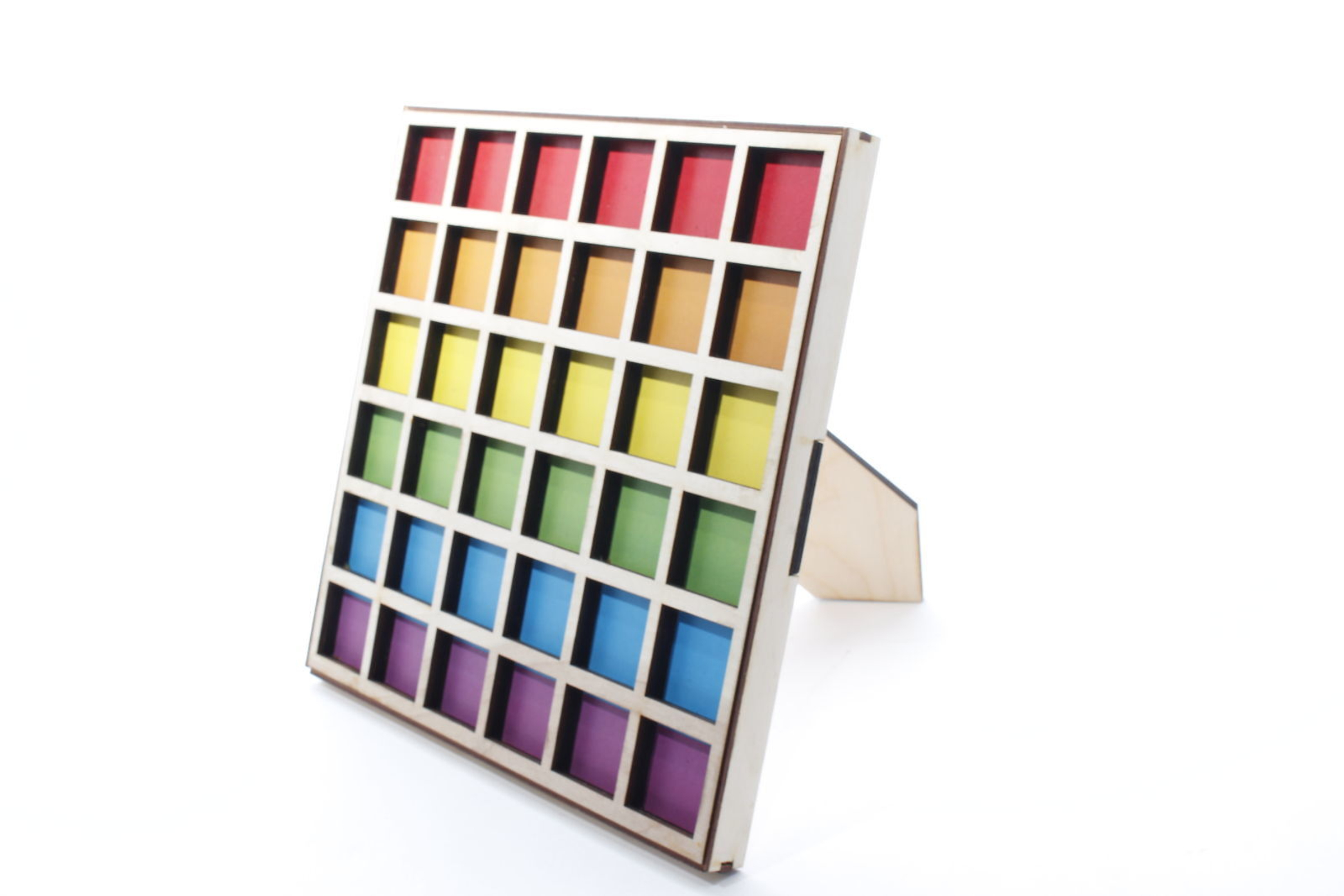 Over 1 million children have fled Syria in the past 5 years. While escaping, travelling, and searching for a new home, they are falling behind in schooling. Besides academics, they also have to learn the language and customs of a different country. Our game is designed to help these children sharpen their skill in the four basic operations, become familiar with PEMDAS, and learn how to count from 1-99 in Turkish.

The game is designed to be played by 2 players. Each player has a set of 60 pieces containing an operation and a number and a card with a set of target numbers. Each target number corresponds to one of the rows on the board. The players’ target numbers are different, and each player keeps their target numbers a secret. Each row is a separate equation, and the goal for each row is for the answer to the equation to be closer to your target number than your opponent’s once the row is completely filled. Players take turns placing pieces on the board, altering the answer of an equation with each turn. This means that players will have to calculate the effect of each action taking PEMDAS into account.

We wanted to create a game that would be fun to play while also incorporating math into the strategy. Every time a piece is played, each player has to solve the row the piece is in to know what effect it had with PEMDAS. The more pieces have been played in the row, the longer the equation becomes. Throughout the course of a game, players will have to perform many calculations, increasing their familiarity with operations and PEMDAS through practice. Familiarity with the 4 basic operations will help the children with exponents, geometry, graphing, polynomials, and even more advanced concepts.

In our first iteration of the game, we thought of a Connect-4 type board, with most of the basic mechanics of the game. Before we made a complete prototype however, we changed the layout of the board, so that it was flat in front of both players. Our board was a perfect square, with a 6x6 grid of indents. There was no system for determining target numbers, and nowhere for the numbers to be represented. Each player’s target numbers were hidden from the other player. After playtesting this board, we found that its shape made its orientation unclear. There was also a “parentheses” round once the board was filled in which the players would take turns placing pairs of parentheses in the equations. Each player would have only two pairs of parentheses to place.

In our second iteration, we made the board stand up at an angle. This allowed players to see the board from a longer distance so that they did not need to sit right next to each other. Because it was semi-vertical, we made a little lip so that the pieces wouldn’t fall out. This also made the rows visibly different than the columns. In addition, we tested making each player’s target numbers known to the other player, and the parentheses round was removed because it was too complicated. Target numbers were assigned by target number cards, and each player now had a cardholder that would hold both their target number card and their pieces. The base of the cardholder had six indents which were made to hold five pieces each. However, they were not deep enough to contain all five of their pieces.

In our final iteration, the board sits up in front of both players, like before. However, the rows and target numbers are now color coded so that each row’s target number can be easily identified. We also decided to not make target numbers known to the other player because it removed much of the strategy from the game. The cardholder was revised, replacing the six indents with a trough designed to hold two layers of pieces in a 5x3 rectangle. When not playing, the cardholder can be rearranged into a compact shape and store a player’s pieces. Finally, we decided that because the parentheses round added so much strategy and calculation, it would be mentioned in the rules as an optional challenge.