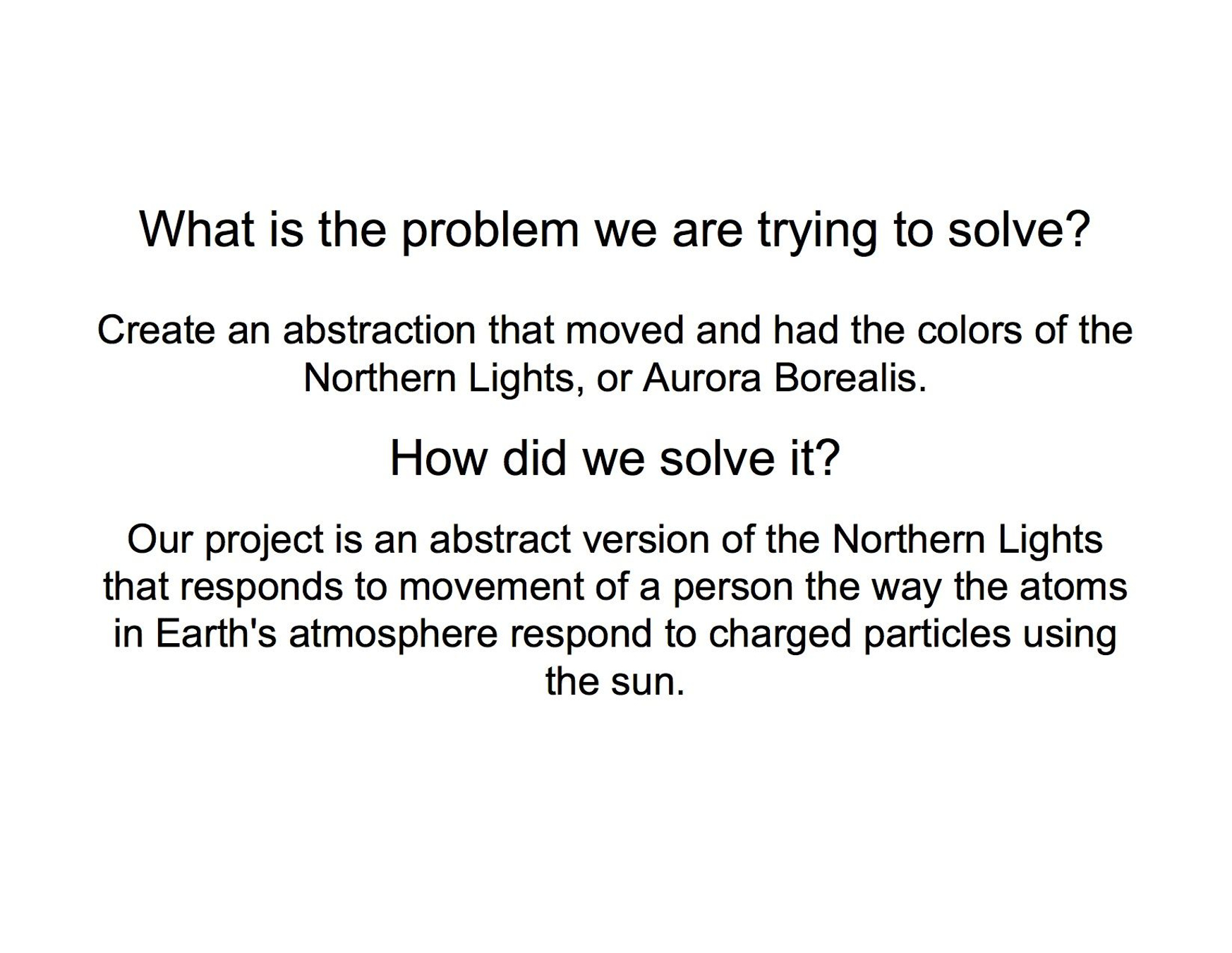 We had to create an abstraction of the Aurora Borealis, so we abstracted the colors and the movement to create an installation that responds to the movement of a person the way atoms in Earth's atmosphere respond to charged particles from the sun, creating the Aurora Borealis.
We decided to create translucent boxes out of acrylic and put LED lights in them. The acrylic and the position of the LEDs diffused the light in a very beautiful way that was similar to the glow of the real Northern Lights. We wanted the boxes to move in a wavy motion like the Northern lights do, so we used a Servo to move a line of the boxes.

The reason for our project was to create an abstraction that moves and had the same colors as the Northern Lights. We did this by using a Servo, acrylic boxes, and LED's to recreate the movement and the colors of the Aurora Borealis. In our project, we had a long wooden board that held up the boxes. On one end it had a screw, and on the other it had a Servo. The Servo was connected to one box, and it would move that box back and forth, therefore also moving all the boxes back and forth. At the same end as the Servo was the power strip and the LED's. The LED's went through all the boxes on the top, creating light that cast downward on the the person standing underneath. Also at the end with the Servo was a Ultrasonic sensor. The sensor would sense whenever a person went underneath our project, and would light up and and move only when triggered. At the beginning of our project, we didn't think hinges were necessary, but we later decided to use them. We created many cardboard boxes; some vertical, some horizontal; some with holes for LED's, some without; some with room to move the boxes ninety degrees, some without. It was a very long process, but because of our many iterations, our project came out well. There were some challenges, however. One, was that because we had been using cardboard the whole time, we did not account for how heavy the acrylic was going to be. The Servo had a hard time moving the boxes, and therefore our project had more of a stuttering motion, instead of a wavy one. A second challenge was that the soldering on our LED's was not good at all, so we ended up having to use just a strip of uninterrupted LED's, and cover up the lights that were showing.

For this iteration, instead of having just cardboard thinly cut in places, we created our first set of boxes. We used boxdesigner.com to make vertical boxes using notching. We attached the boxes using screws. We would put the lights down the sides of the boxes. We ended up not using this version for a few different reasons. One was that the motion was very limited, and it was not able to move in the wavy motion. Another, was that we decided the lights would look more realistic coming from the top, rather than the side. It would have more of a glow effect and be more representative of the Northern Lights. We changed a lot of features for the next iteration.

This iteration is one step before our final cut. We made the boxes horizontal and planned to have the lights coming from the top. There were still a few technical changes that we needed after this iteration, though. We had to alter the Rhino sketch to accommodate space for the top and bottom pieces so they didn't stick up as they do in this picture. We also made them more visually appealing by making end pieces and we added screw holes for the servo. The only other thing we changed from this version for the final was changing the box dimensions from cardboard width to acrylic width.