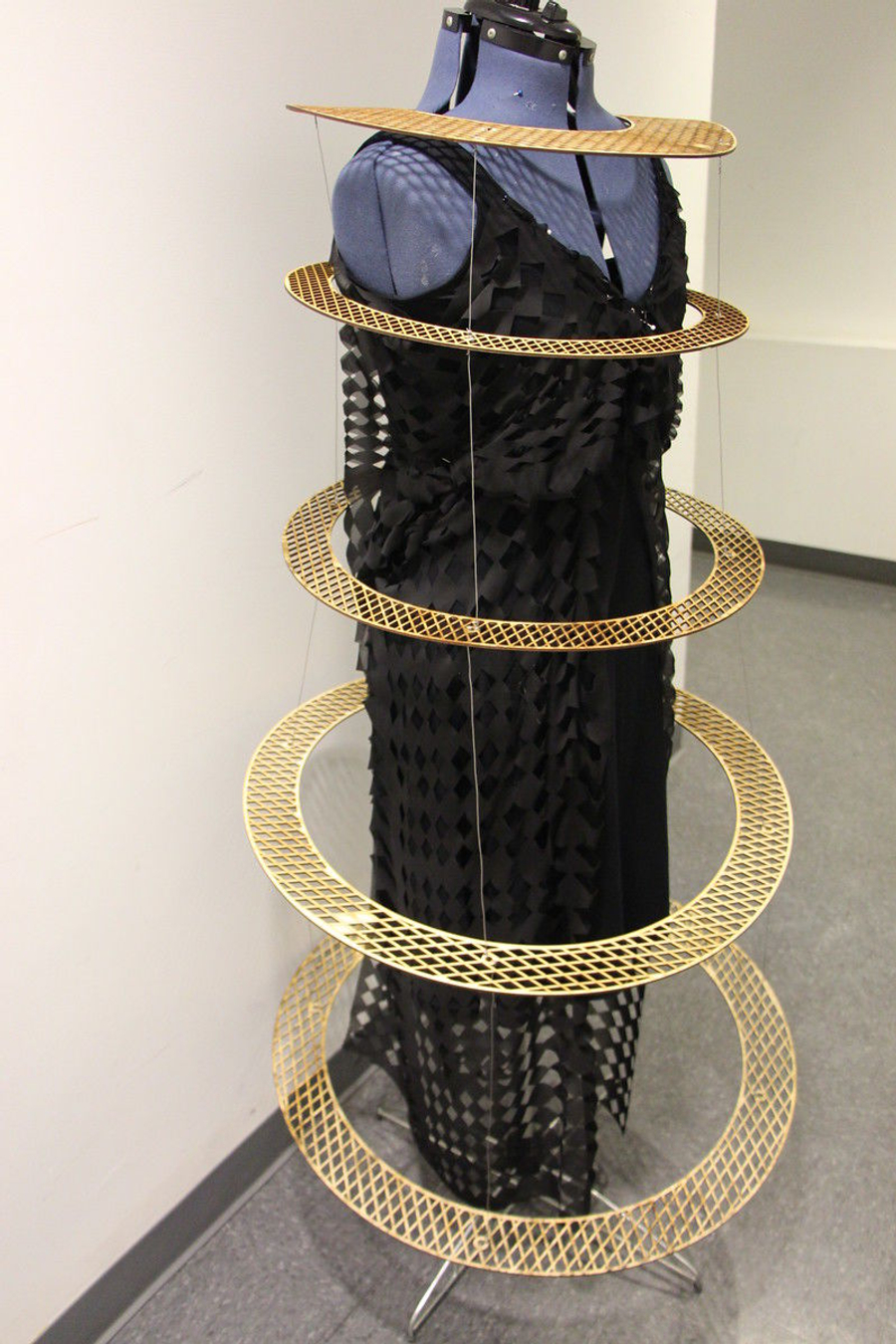 Our final idea had the same concept of our first prototype, with the rings in use for protection and attachment. It has 5 rings particularly placed for ultra protection of the body. The first for the shoulders and neck, then chest, then waist, then shins and knees, then the feet. These 5 rings are attached evenly with wire to make the dress flexible while keeping the same structure.

We wanted our underneath fabric to have a pattern but we didn't want it to take away from our rings and the design on those. We also have a small black slip under our lazor cut fabric to make it less sheer and see-threw. These fabrics and to protect of your skin and help the visual appeal of the project. Our assignment was to imagine a time far away from now when we had run out of land that we are living on now. We were assigned to create wearables for alternate living situations and ours was underground. The closest experiences humans have with living underground is cave mining, and so our first step was to research the greatest accidents and harm that people have delt with when cave mining. We found temperature and light but the biggest recurrence issue was the danger of rocks. Rocks underground and in caves could fall on us at anytime and once they fall its usably to late for you do escape them. We decided we wanted to create a project that would project you from these rocks falling. We began to brainstorm items that already existed that blocked the outside from what  was unprotected on the in. Our biggest inspiration was a shark tank, blocking the sharks from the people in the cage. After lots of sketches and pondering we came with the idea of a dress that blocked out the rocks, protecting the persons wearing the dress.

For our first iteration we experimented with the shape of our design. We knew we wanted an exoskeleton like design that used progressively larger unconnected shapes such as rings which would give us the desired effect. Our first idea was the ring shape which we were the happiest with and worked the best. Even though we were set on using circles, we experimented with other shapes just to try out some other ideas. We experimented with some more creative shape ideas like circles that resembled sunny side up eggs and more simple designs like squares. for our iteration that used ovals, we agreed that the designs had uneven proportions that wouldn't flow with the overall body of our design. When constructing our egg shapes, we liked that they added a more creative and fun design element, though the overall design of the shapes weren't as aesthetically pleasing. Though we didn't use the egg shapes, we used the design idea of having the circles gradually become larger and larger towards the bottom of the dress. Our last design idea to try were the squares which we were hesitant to even put into production because we knew they would be too unwieldy.

Our ideas for the next iteration including adding fabric in between the disks that would help protect the body even more from falling rocks. Before we had this idea, we took a look at the obvious problem our dress had. The hoops only protect you from falling rocks that hit exactly on the hoops, and if rocks hit between, under, or on top of other areas of the dress, you wouldn’t be protected. To fix this problem, we experimented with the idea of placing a stretchy but sturdy fabric in between all of the hoops so the problem of falling rocks would be fixed. This solution worked pretty well and was much more protective than our first iteration. But while this solution worked, it restricted arm and body movement so much, that it would be impossible to move in the garment when underground. Even though the fabric worked but was bulky and restricting, we wanted to take this idea to the next level and alter the design so it could work. We stuck with the fabric like idea and used thick string that was woven in a tight criss cross design to make a cage like structure that would be placed in between each of the rings. This solution worked a lot better and allowed for more arm and body movement, while still protecting the body from falling rocks.

For our third iteration we wanted to find a way of decorating the wood to make a more ornate look. At first we though of the idea to mirror the images found in ancient cave paintings to connect back to the idea of living underground. we decided this did not look as interesting as we thought seeing as it would not look like anything unless you were up close at the right angle. We than thought of cutting out diamonds to connect to the idea of living in mines. the diamond shapes created a beautiful look for the wood that was both intricate but also simplistic like the rest of the design.