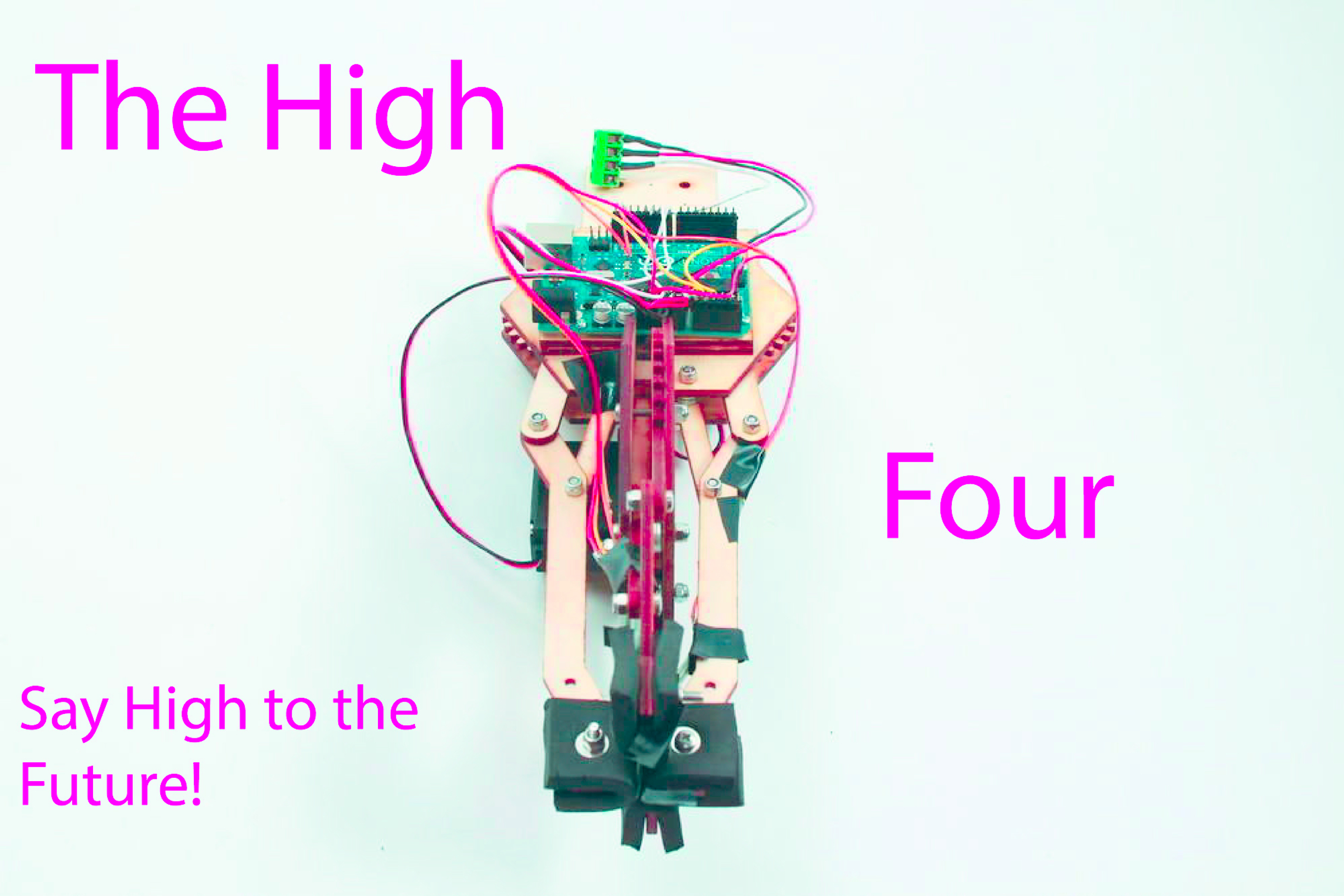 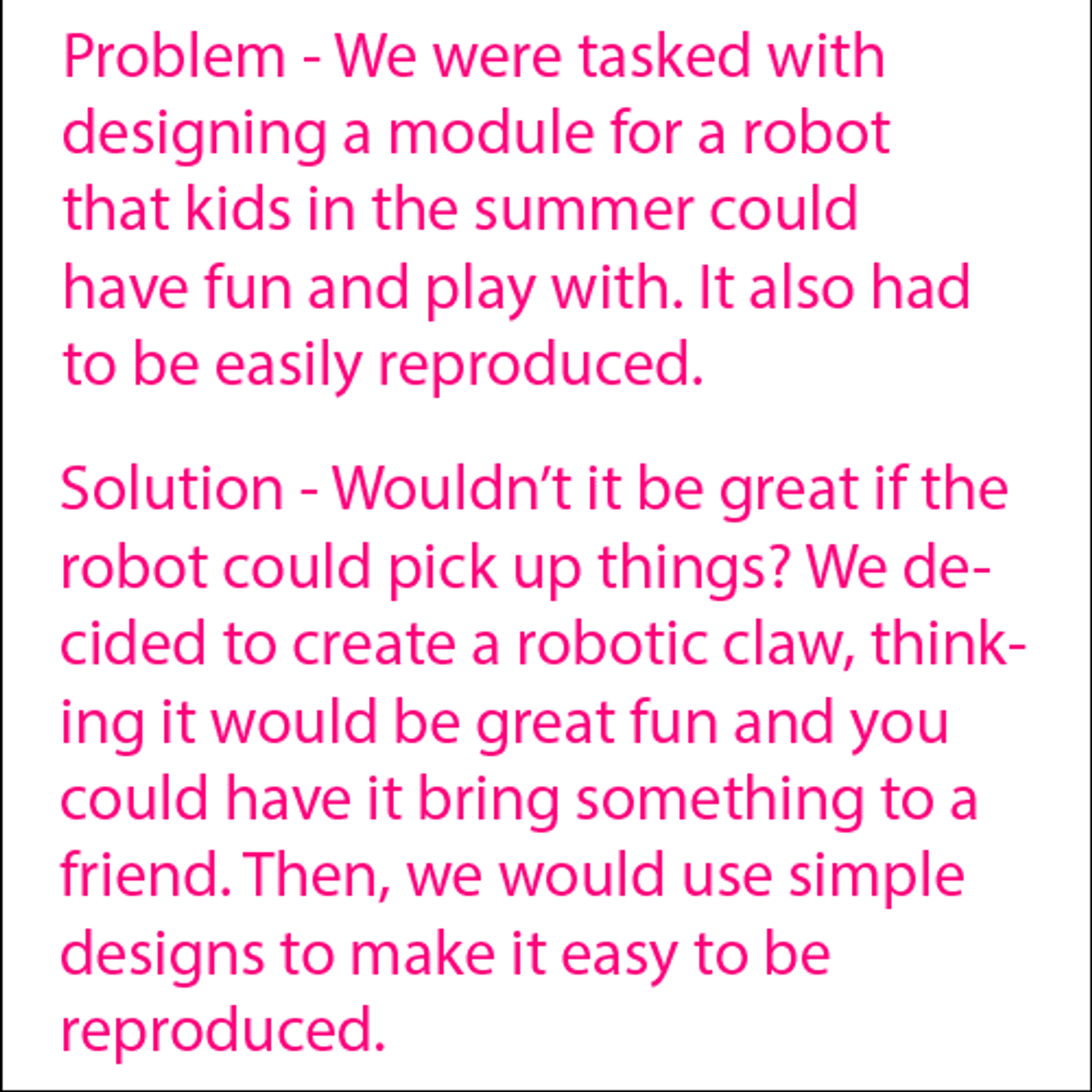 In this studio we were given the concept of creating a creative robotic module. Each group would complete a separate type of module eventually leading to the connection of all six modules. A base hole pattern was given and each module was built to connect to the base robot.

Our module was the creation of a functional robotic claw. This claw was designed to pick up any object the robot may encounter. It was also designed to fit on any type of robot with the same screw pattern, due to the back screw plate. We wanted to create a simple yet functional design that could easily be recreated.

We wanted to create a claw that had four fingers instead of just two as most robotic claws function. Many robotic claws had been designed before, but did not look like the type we wanted to create. Our type of claw featured two of nearly identical types of claw. We wanted the two claws to connect together by having one vertical and one horizontal. They would intersect at ninety degrees to insure straight fingers and a tight finger intersection. We made an extra the addition of sensory pads to ensure that the robot applied the correct pressure when picking up objects, which would not be inappropriately hard and destructive in its touch. We  thought four claws were superior for it allowed us to be able to pick up a variety of objects including more awkward shapes, such as pencils, rather than only cubes and spheres.

Our claw consists of two individual claws each built off of hexagons. Each claw features two hexagons with a gear system in the center. The gear system is created of two large gears which mesh together and lead to the fingers of the claw. Then a hole was cut for the placement of a servo in the hexagons. The servo head was removed leaving a small gear which meshes with the gear system found in the center of the two hexagons. When the servo was activated to turn, it would cause both gears to turn bringing the fingers closer together. The fingers are connected in two sections along with the incorporation of connectors that fasten to the main hexagon of the claw. This makes the rotation of the fingers more smooth. Both claws are connected together through a notch system. There are two notches found in the back of the small claw and front of the bigger claw. Each of the two claws feature a pressure sensor found on the fingers. Through arduino we were able to create a code that caused the claw to stop closing when the pressure sensor was activated. This was the servos will not strip, and objects will not get damaged. The arduino is attached to the larger claw found in the back.

Our project developed slowly with frequent iterations and many failures. The first iteration focused mainly on a box to hold a servo and some gears on top with arms attached, but there were quite a few problems (like forgetting that servos have cables…) and it took many tries in cardboard before there was one that was the least bit presentable. Meanwhile, Ryan focused on a more beautiful design which incorporated many useful features, like ways that the gears have to connect to the main body. After Grace had learned how quite a lot about the servo’s nature, and Ryan had learned quite a lot from analysing other works and from his own structure, we put our ideas together to make what we are presenting today. It went through one last iteration, which included adding a second set of claws and a mounting board to attach it into the main chassis and one for the arduino. After that, we added the sensory pads and found ourselves at a satisfactory place for Friday/today.

There were quite a few, from the design itself to how to hold the sensory pads on. One in particular was the cables. Towards the end, we found ourselves with an abundance of cables, but no where to put them. They looked hideous and we were fearful that they’d get caught in the fingers. Another was the fact that it had to be made easy to use for the younger generation. That meant if we went too complicated, it would be too difficult for them. It wasn’t too much of a constraint, but it did ring in our minds a lot. Then finally, we had some trouble with the sensory pads. If we had longer, we would’ve loved to edit the way they were attached. At this moment in time, they are fixed in place with electrical tape, but we would love to change that.

Our first iteration was a box that contained a servo with gears and fingers. It worked quite well and was able to rotate both fingers, but we had to play around with the location of the holes. This iteration was important because it was our first, and taught us about the limitations of a servo. In this iteration we had glued a gear directly on the top of the servo head. It worked well enough to turn both gears and activate the fingers, but the gears often slipped. We realized we had to find a new was around this problem.

After the completion of our first iteration, we began researching more designs that were inspiring. The iteration featured a design that was similar to our final design. It featured a single hexagon base plate with dual gears and a two part finger design. The fingers also featured a connector system which provided much more stability and accuracy of the arms. The connectors connected to the base hexagon. One of the biggest updates we had was the updated gears and servo. We removed the servo head which revealed a gear. We found the exact gear pattern and incorporated this into the gear system. In this update, the gears would not slip.

Our final iteration featured a much more advanced design compared to our previous projects. This design featured a highly modified hexagon base. In this new base, a section was cut out for the servo, and a top piece was placed over the gears and bottom hexagon. This way all of the mechanical and moving pieces were stored between the two hexagon bases. The next major update was the addition of the second claw. This claw would go behind the first claw and had bigger fingers to accommodate for the distance issue. The two claws were designed to connect through a notch system. This way the two claws connected at a ninety degree angle and all four fingers intersected perfectly. We also had to make modifications to fit the arduino and store it on the back claw.

Robots capture our imagination. Somehow, through the combination of physical structure, electro-mechnical devices, with computers and programming, we can create something that has a life of its own. In this studio, students will learn how robotics work, by starting with its fundamental components. Students will develop the building blocks of a modular robotics kit, including "plug-and-play" motors, servos, lights, power supplies, and embedded electronics. To create these blocks, students will learn about and apply physics, electrical engineering, 2D & 3D modeling tools, as well as design and fabricate their own printed circuit boards.