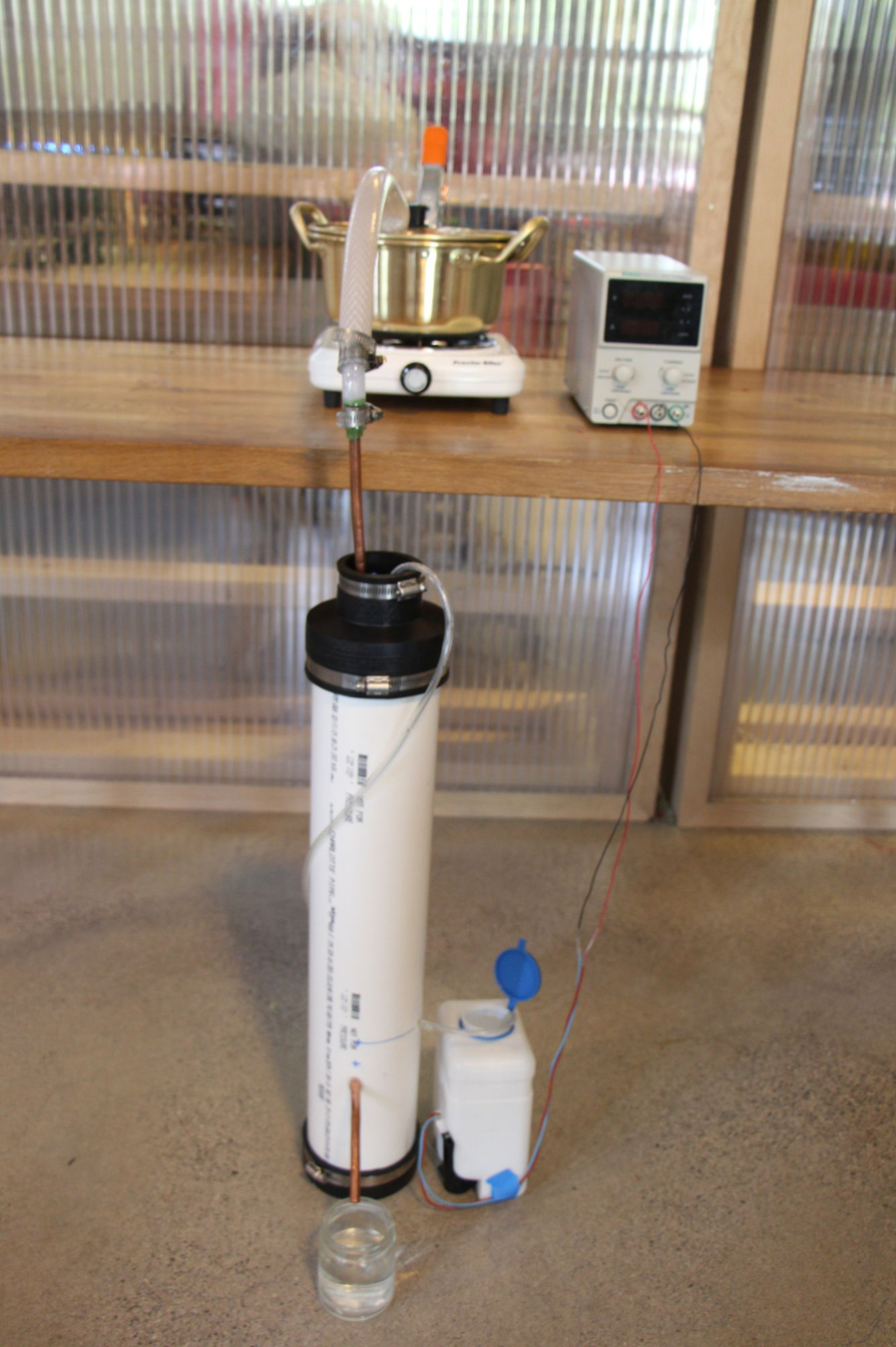 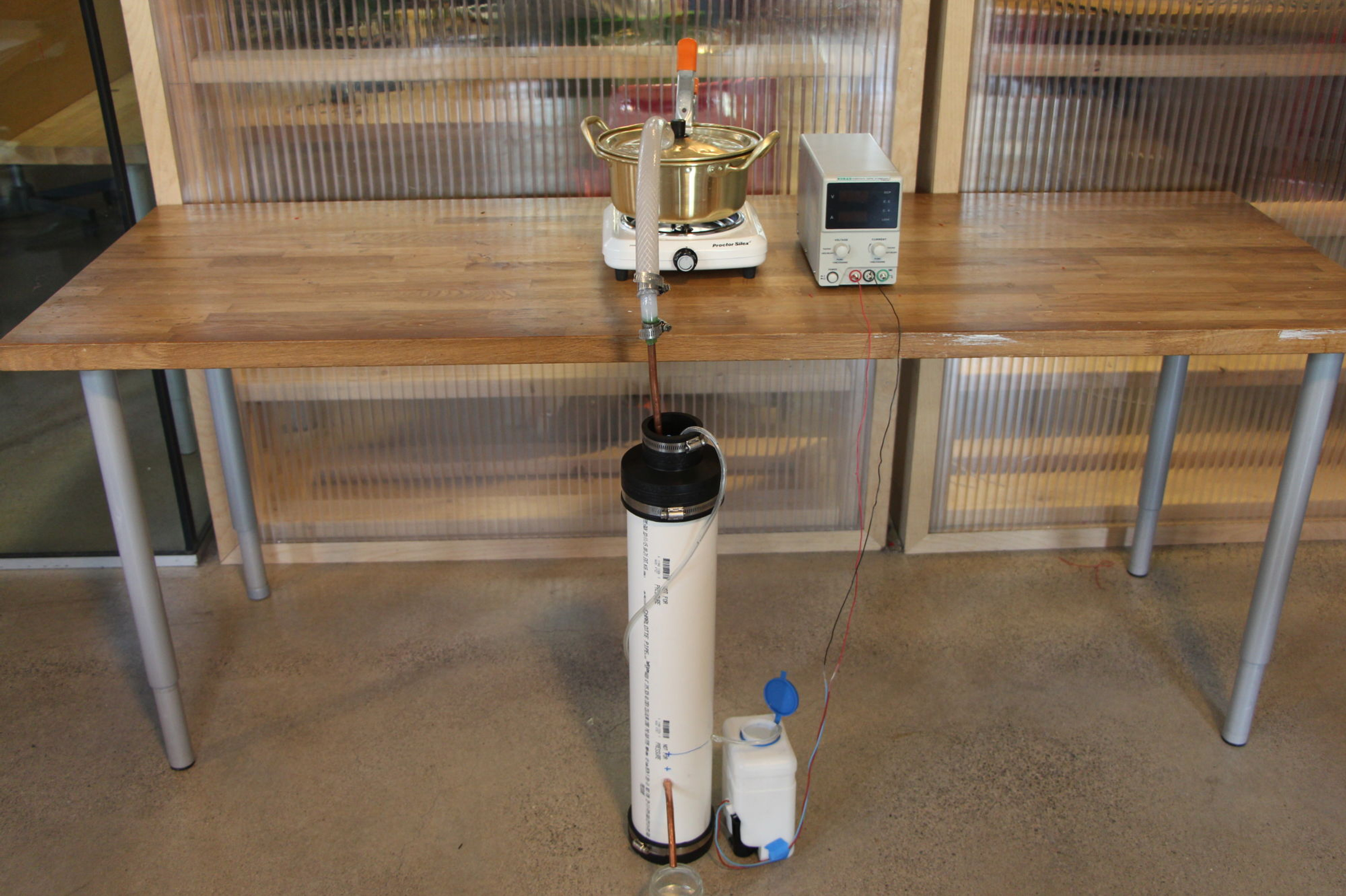 We built a three-step water distiller. Water is boiled in a pot on an electric burner, the steam that is created goes up through the tube and into the coil system, where it is then cooled by a constantly-cycling cooling system, built using tubing and a windshield wiper system from a car. The re-condensed steam then flows out of the nozzle at the end to be collected, cleaned of any unwanted elements. It is built primarily out of hard and flexible Poly-Vinyl Chloride (PVC) tubes. The other materials include hose clamps, epoxy glue, a motor-pump, a power source, and rubber tube caps. This distiller can efficiently clean water for use in science experiments or consumption. 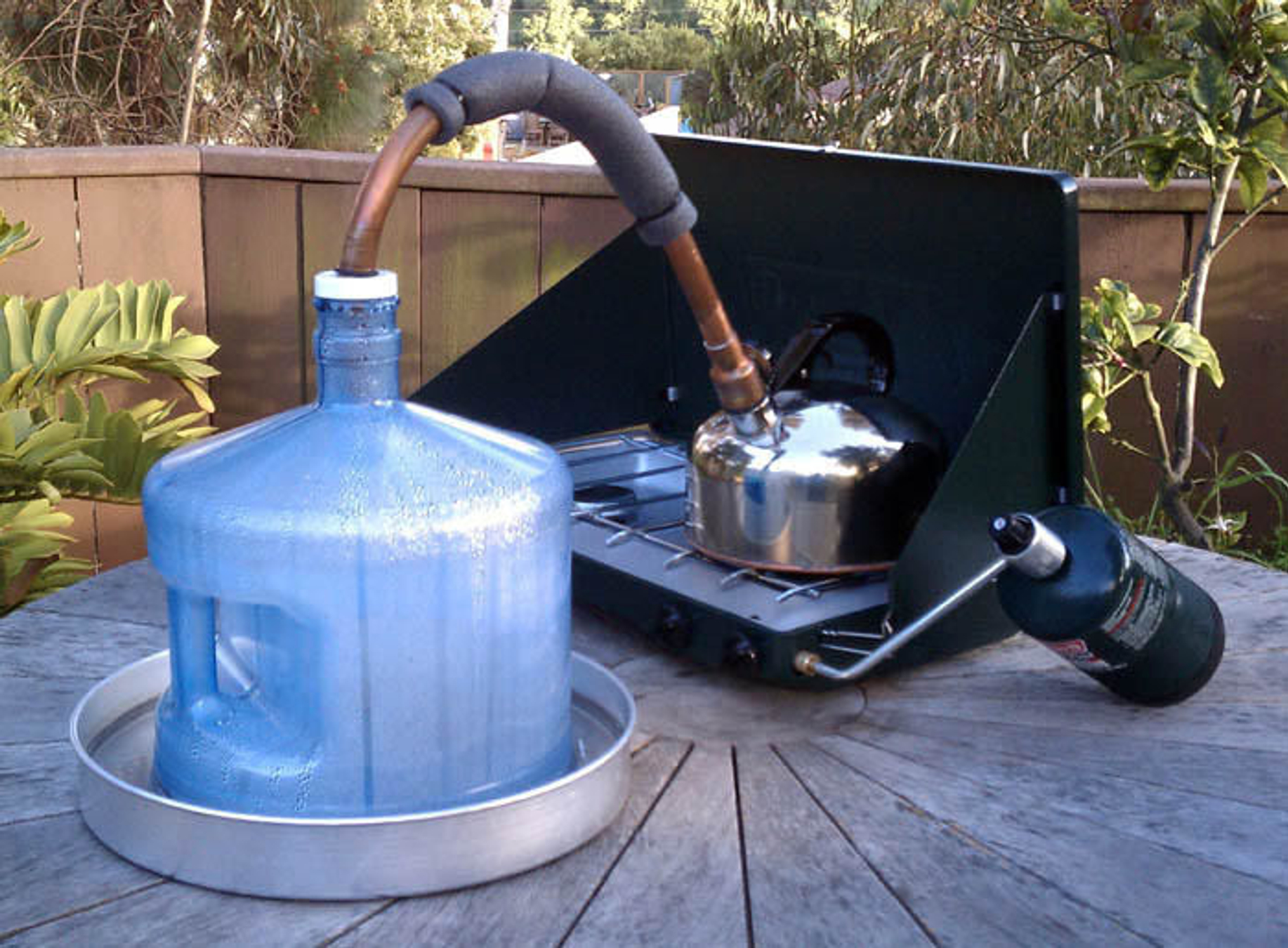 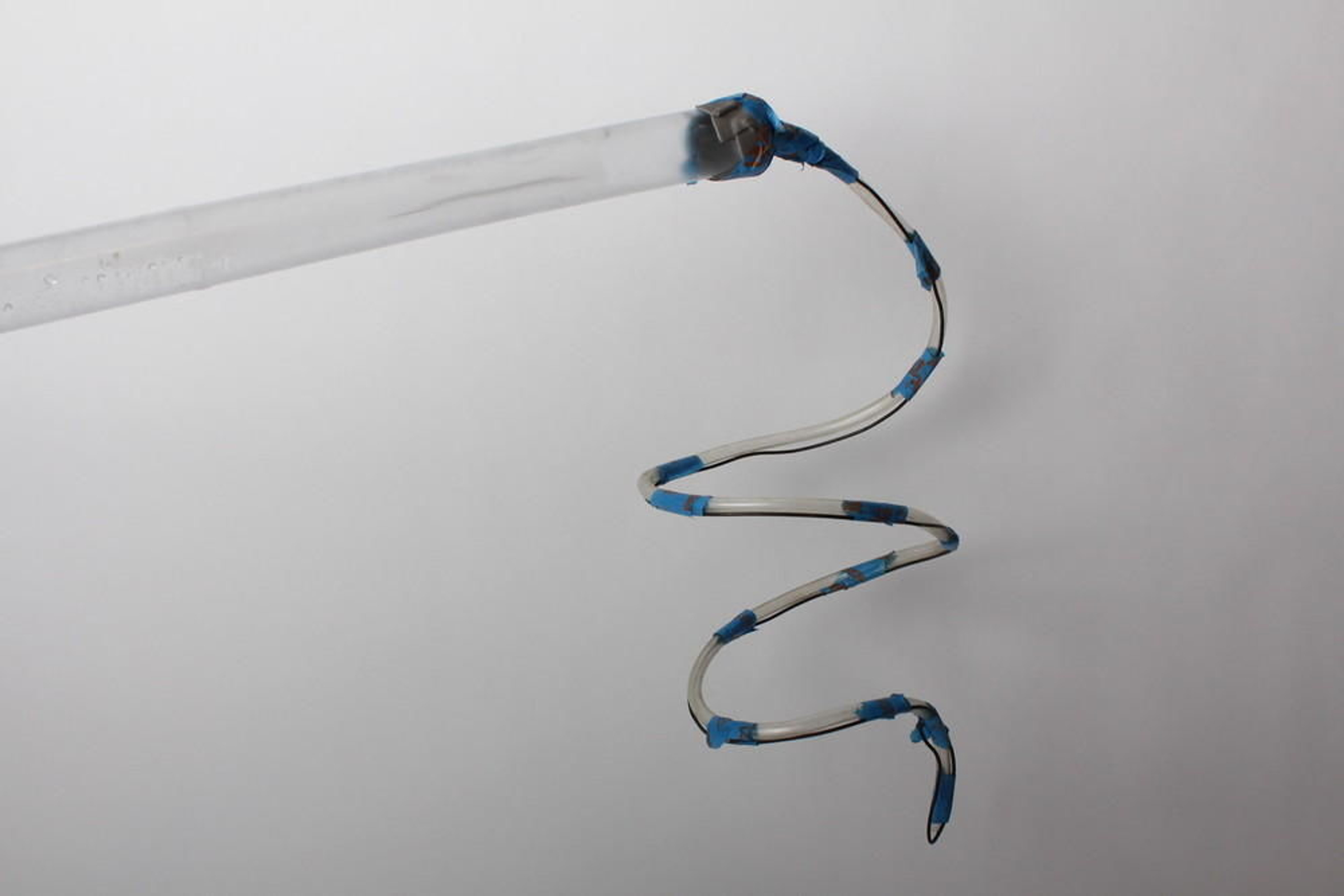 We began by thinking of designs for an efficient distiller as well looking at possible materials. We decided it would be a good idea to use a teapot to boil the liquid, because teapots are easy to use and easy to obtain. We had a few ideas for cooling methods. One idea was to have a chamber for the steam to be caught in and cool down before it drips into the water container, the second idea was to have a coiled tube to give the steam time to cool and condense into the cup. We were unsure of what type of material to use for the coil.

Eventually, we ended up temporarily ruling out hose for piping because of the possibility of contamination. After that we spent a lot of time thinking of material ideas. We then got down to making a prototype for our project. We used a standard teapot with thin plastic tubing that was affixed with tape. After heating the water in an electric heater we poured it into the teapot. After a few minutes the plastic tubing started to melt and bend so we turned it off and started to think of other ideas. We also noticed that the steam was having a hard time travelling through the connection between the first and second tubes. We thought about using bigger ones or fixing the connection.

We moved on, and attempted to build another iteration of our design. This time we used more heat resistant flexible pipe to attach to the teapot mouth. We still used electrical tape, as we had not figured out a proper method of connection. We then attached smaller tubing for the coil portion of the design. We set it up with the teapot on a griddle on the floor. The HR tube (heat-resistant) bent up from the teapot to a slightly thinner tube that was coiled around a table leg. After a few minutes of boiling the water, we didn't see any steam getting to the coil portion. We changed the setup a bit so the teapot would be on the table and the pipes would aim down under the table. We tried this for a while but the water kept condensing a few inches out from the teapot mouth. Eventually we turned it off and started to think of ways to push the steam further out. We decided that we need a better heat source and possibly smaller/different tubing.

We then attempted to fix the heating problem by using a hotplate instead of a griddle. We got much more steam to gather and a little bit of condensation. Ultimately, the tubing was too hot because the heat was spreading and distributing itself along the entire pipe. We decided we needed a cooling element in our project, so we took a larger pipe from the workshop and fit it around the smaller tube (where the steam/distilled water would flow.) We drilled a hole in the bottom of the pipe and put a very small tube in to give the water a place to filter out. Then we found an old windshield wiper pump and put the tube from the pump into the top of the larger tube. The very small tube ended in the pump’s reservoir, creating a simple reciprocating cooling system. When we tried the design again toward the end of the day we used an electric burner which heated up much faster, and got much hotter. We saw a lot more steam coming through the tubes. As for the cooling part of the design, it did bring down the temperature some and help with condensation. However, the water was still letting off a good amount of steam when it reached the bowl we put at the end of the pipe.

We wanted the tube inside the hard-wall pvc cooling chamber to be coiled in order to prevent any more steam loss, and so we thought about ways of doing that. In order to release the most heat, we decided to use metal pipes for the coil, and insulated plastic for the bend from the teapot. We then considered whether bending steel pipe for a coil would be viable. We tried bending 1” steel pipe, but we were incapable of creating a coil. We decided to not continue using the water reservoir we had used previously, is it was too small for any workable coil. Throughout this, we also worked on finding different tube sizes in order to fit the teapot.

After landing on using copper piping for the coil, we started straightening and bending the copper tubing into a coil by hand (not easy!), and then we went about affixing it into the hard-wall pvc. We also bought and attached two rubber caps for the hard-wall cooling chamber. We bent the copper out of a hole we drilled in the pvc in order to create a nozzle for the recondensed water to flow out of. We also drilled a new hole for the coolant outflow. We sealed both with epoxy.

We needed to make some edits to our project. Firstly, we bought an aluminum pot for heating the water in, as we could drill a hole of any size into the lid. We set our new iteration up in the shop and filled the water tank almost to the top before boiling the water in the pot. We set the pump at 4 volts to keep a consistent level, filled the pot with water, and clamped it down so minimal steam would escape through the cracks. When we turned on the power, the burner eventually reached around 500 degrees celsius. The steam went through the tubes and condensed relatively quickly, but there were a few leaks in both the cooling and main pipes. After 20 minutes, we had about a quarter of a glass of water.

We started fixing the leaks in the pipes. We used epoxy to fill the space in between the overlapping pipes so that no water could leak out. We then tested the distill with regular, dirty, and salt water to see if the water could be thoroughly cleaned, no matter what was in it. Throughout each test, we had to continuously tighten the tube clamps that held the tubes together in order to prevent leaking.

In our final design we built a three-step water distiller. Water is boiled in a pot on an electric burner, the steam that is created goes up through the tube and into the coil system, where it is then cooled by a constantly-cycling cooling system, built using tubing and a windshield wiper system from a car. The re-condensed steam then flows out of the nozzle at the end to be collected, cleaned of any unwanted elements. It is built primarily out of hard and flexible Poly-Vinyl Chloride (PVC) tubes. The other materials include hose clamps, epoxy glue, a motor-pump, and rubber tube caps. This distiller can efficiently clean water for use in science experiments or consumption.