After several lengthy laser cuts our group was finally able to assemble the pieces for our final product. Several things worked out quite differently than we had first anticipated. We went through a couple iterations of the "forest rectangles"/face protectors before deciding upon the final square design. The final chest piece also went through a subtle change by shrinking the width of the rectangular slots by a couple milimeters in order to make the joint pieces fit more snug and wobble signifficantly less. In terms of practicality there are several things which could be improved upon. The protection on the shoulder section, for example, does not face the ideal angle towards the outside which takes away from the original bowl/dome shape we had hoped to create around the wearers head. If given more time, hopefully we could also be able to impliment some sort of glass or see-through barrier in the holes we made in order for our design to actually be practical in a sandstorm situation. 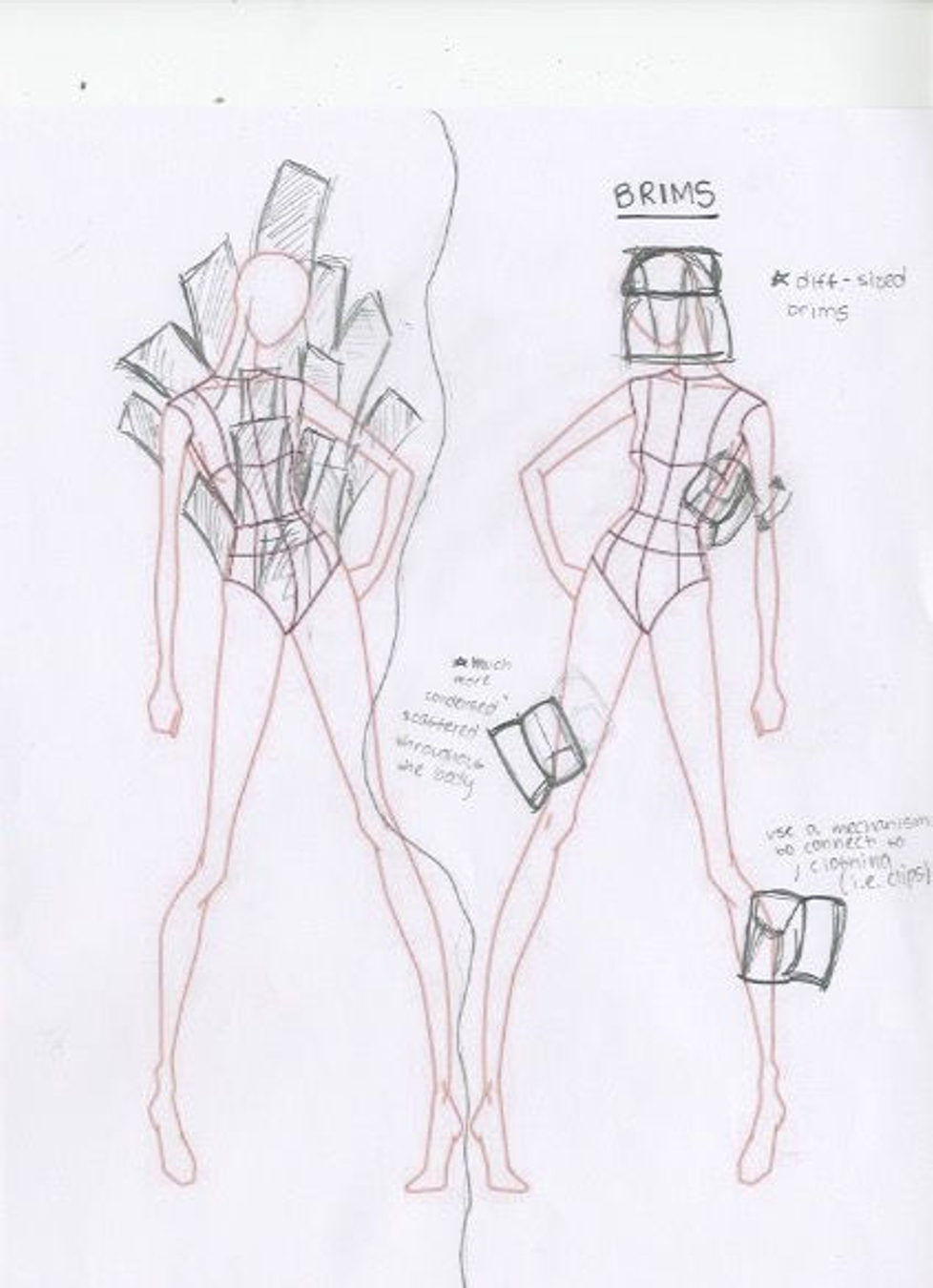 Our group was assigned to create a wearable that would make desert life easier and more habitable. The common problem we sought to solve was both protection from the glaring sun and the protection of the eyes from sand and dust. To combat this, we created a concept for a wearable with a base in the chest/torso area that would hold up a barrier to protect the face.

The first iteration of our chestpiece was simply two oval shapes held together by tape. We improved upon this design in the second iteration by making curved pieces in between, along with laser cut hinges to give our piece an angle to fit nicely over the shoulder. Nuradin and I had to try out a couple different angles on the hinges in order to find which angle gave the best balance of snugness and accessibility to be put on. We then added several small rectangular holes that would allow for us to hold our rectangular blockades upright.

Mollie's initial design for the "forest rectangles", as we call them, were large rectangles with patterns, such as medium-sized circles covered all over it. After modeling it in Rhino and laser-cutting it out of cardboard we realized it was very dull and did not relate to the design look we were going for as a group; and decided to change both the shape and pattern of the design. For our second iteration, Mollie worked on more of an abstract pattern that reflected the blank space between tree leaves and as for the outside, Molliefree-formed it to make it look like the outline of a tree. After mocking it up in Rhino and laser-cutting a prototype, found that the scale was too large, so I went back into Rhino and scaled it down. Unfortunately, it still looked off and did not envision what we wanted the physical design to look like; we scratched the tree-leaf pattern and came up with a new idea. For our third iteration, Mollie designed a slots pattern and shaped the outline similar to a geometric configuration. After laser-cutting prototypes both out of cardboard and thin wood, everything seemed to fit/function perfectly except the slots were a little too big and were unable to fit in the wooden chest plate. For the final, we scaled down the slots on the "forest rectangles" and slightly evolved both the pattern and the shape to make it resemble more of a forest.