Prototype No. 3 - refined prototype with mechanism Once we knew the mechanism worked, we talked about making it look and feel more organic.  One observation we made with Prototype No. 2 was we only needed one side to make the mechanism work.  So we moved the supports into the middle and thought about a stegasaurus.

Utilizing the Rhino software, we laid out our parts (5 planks, 5 trapezoids, and supports).  We used the laser cutter to cut our parts on cardboard.  At this point in the process, we felt going into Rhino would be beneficial because, if Prototype No. 3 was successful, then we could make modifications in Rhino then go to the acrylic cut.

After we received the parts from the laser cutter, we assembled our new prototype.  The "spine" model worked!  Then we trimmed the tops off the final two trapezoids to create a tapering effect.  We then sketched, on the currently square prototype, a tail-like shape and cut it into the final version of Prototype No. 3 (see pictures).

What we learned from Prototype No. 3 was that it is a little too short, so Adam is working in Rhino to scale it up a bit.  And he's working on the taper of the tail as well.

Prototype No. 2 - the mechanism

This video shows the mechanism to retract and extend the arm.  Our final will be made out of acrylic so it'll be clear.  We believe we will streamline the arm to make it more elegant than this prototype.

On the road to Prototype No. 2

We had lengthy discussions with our coaches, Anjali, David, and Aaron.  Each had much to contribute.  Anjali mentioned it might be cool to have sensors (heartbeat) to measure how Kai feels and that could affect the behavior of the arm.  This would introduce the element of variability we were looking for.  Another suggestion, from Adam, was to perhaps have a remote control away from the arm so another artist could control and interact with Kai.  David said they also have breath sensors. 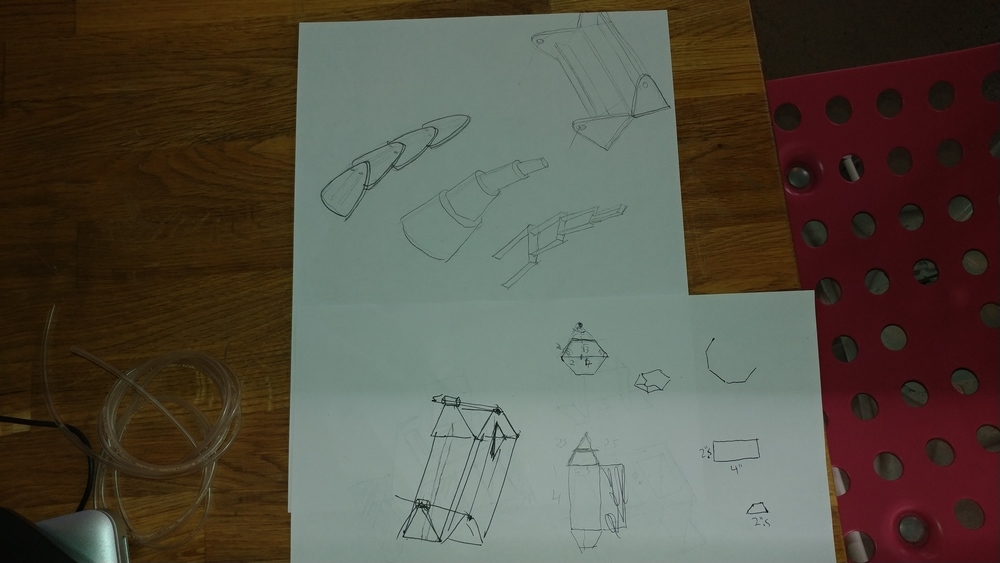 We had a lengthy discussion about robotics and the telescoping mechanism that would be needed to make the arm work.  David and Aaron were really helpful in the discussion.  They brainstormed how the mechanism might work.  Rubber bands, springs, motors, a track system were all introduced as potential solutions.  Numerous sketches were made (see photos).  All of the solutions proved to be problematic.

Then Aaron mentioned the Thomas Heatherwick Bridge in England.

This folding mechanism might be the easiest way to complete our vision.  I believe we lose some of the aesthetic, but maybe I'll be proven wrong. 1 / 3
Miniature of the entire piece

Here is our first prototype.  We feel it represents Kai's feeling of the phantom arm.  There were two things to consider in our design; the aesthetic and the practical. 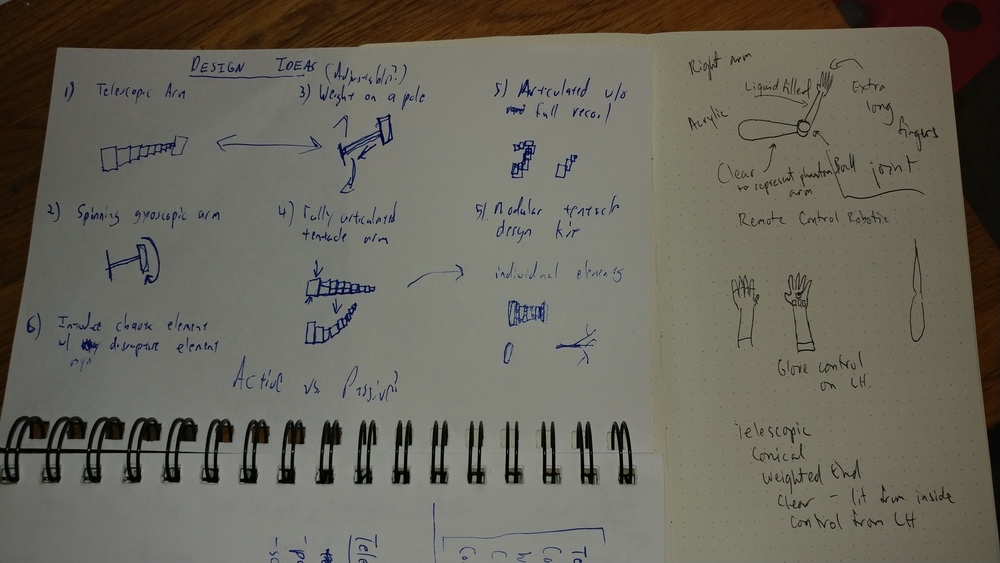 In the aesthetic, we wanted to have something that represented Kai's feeling of the phantom arm.  We'd like the arm to be clear, possible acrylic.  Because the arm would be used in performance, we wanted something that would react well to stage lighting and perhaps even soft LED lighting incorporated on/in the arm.  This would give the audience the perception of something that is there, but yet perhaps missing.  Kai also expresses the arm sometimes feels shorter than the original and her sense of balance is thrown off.  This allows her to interact with the arm.

For practical reasons, we were thinking about using a telescoping mechanism that could perhaps be controlled by a glove-like controller in her left hand.  The controller might also control other things like lighting and maybe even introduce an element of variability.  The telescoping length would change the way Kai balances as she moves.

We feel robotics would be employed in this project for  Kai to control the arm.

Experiencing imbalance from an external force We wanted to experience what it was like to feel imbalance due to influence from another force.  In our study, Kai writes, "Getting used to the change in her center of gravity has been a challenge, yet it adds chaotic flair to her routine."  How can we utilize the sense of imbalance to allow Kai to transcend the deficiency of her missing arm, instead allowing her to use it as an advantage?  Could it be an interactive part of her performance that enables her to react and improvise?  It seems as though she enjoys the chaotic flair.  She already has a sense of turning her misfortune into an advantage. A small attachment for your door that fully automates it for wheelchair accessibility. It uses a string to unlatch the handle and rolls the door open with a wheel.

For people with disabilities, it can be difficult if not impossible to leave the house on your own for many reasons. In the case of our client, Lee has quadriplegic cerebral palsy and therefore, can't open a door on his own. I decided to solve this by automating his door.  While there are obviously forms of automation for doors that have existed for a long time, there aren't really any home alternatives. Most of the automatic doors you see are bulky metal bars at the top of a door, impersonal, tacky, non-domestic, and overpriced. I decided to create a small, affordable, and easy to install automation for Lee's home. The design is a small box you slide under your door with a wheel on the floor, and a string sticking out the top attached to the door handle. When installing, all you have to do is slide the box under, tie the string around your door handle, and once you plug it in your done!