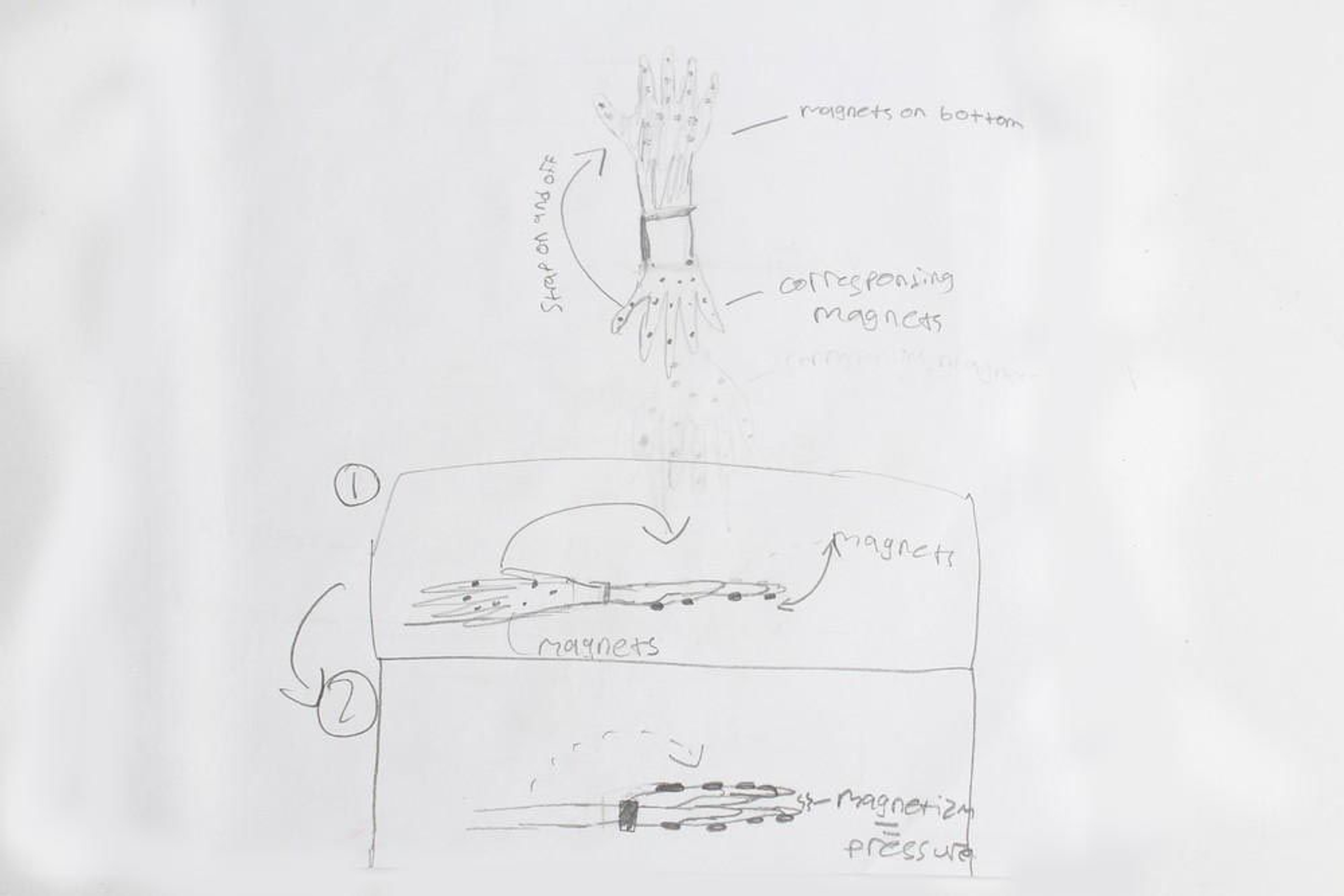 Magnets were taped onto a latex glove to demonstrate magnetic pressure.

Gloves were hand cut from felt and magnets were taped on.

Premade, waterproof glove with magnets taped on the bottom. We attached a corresponding felt flap with magnets; when the flap is placed onto the top of your hand the magnets will attract to the ones on the bottom of the hand.

We created a box-like station out of lasercut cardboard layers stacked on top of eachother. Each layer was designed as a 2d Rhino file. Spaces were cut in the cardboard to place the magnetic fabric and different holes were cut to store the elctromagnets on the top and on the bottom of the box and the hand that would go inside of it. This iteration utilizesed electromagnets and magnetic pressure to take the glove off and put it on.

This was when the electro magnets were introduced (go to bottom to see how they work).

Iteration 5 was essentially the same as Iteration 4 except with nuts and bolts to separate the top and bottom parts of the box. The parts are separated to enable the user to fit their hand inside two sets of electro magnets.

This time the layers were designed in Rhino to fit screws, nuts, and bolts. The station was cut out of wood instead of cardboard, which allowed for more stability.

How the elecromagnets make our idea work:

The final more developed version will use two pieces of magnetic "fabric" instead of two magnets.

Smaller lasercut cardboard triangles with small holes on both ends to remove the cardboard "barrier."

The cardboard triangles from iteration 4 (with magnets) attached to one another with string.

Large 3d printed triangular hinges with a space for a magnet (with supports).

Smaller 3d printed hinges with a space for a magnet (without supports). 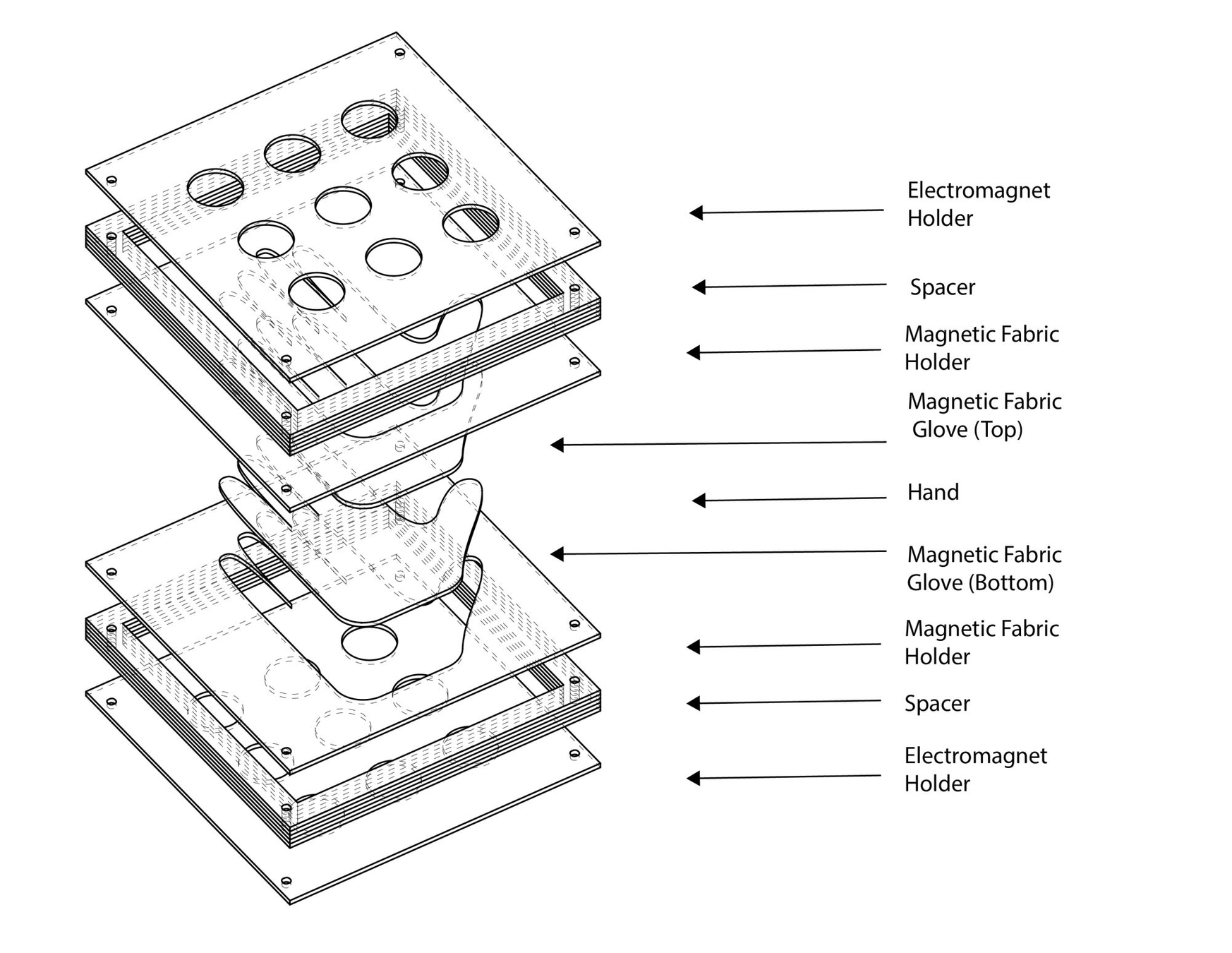 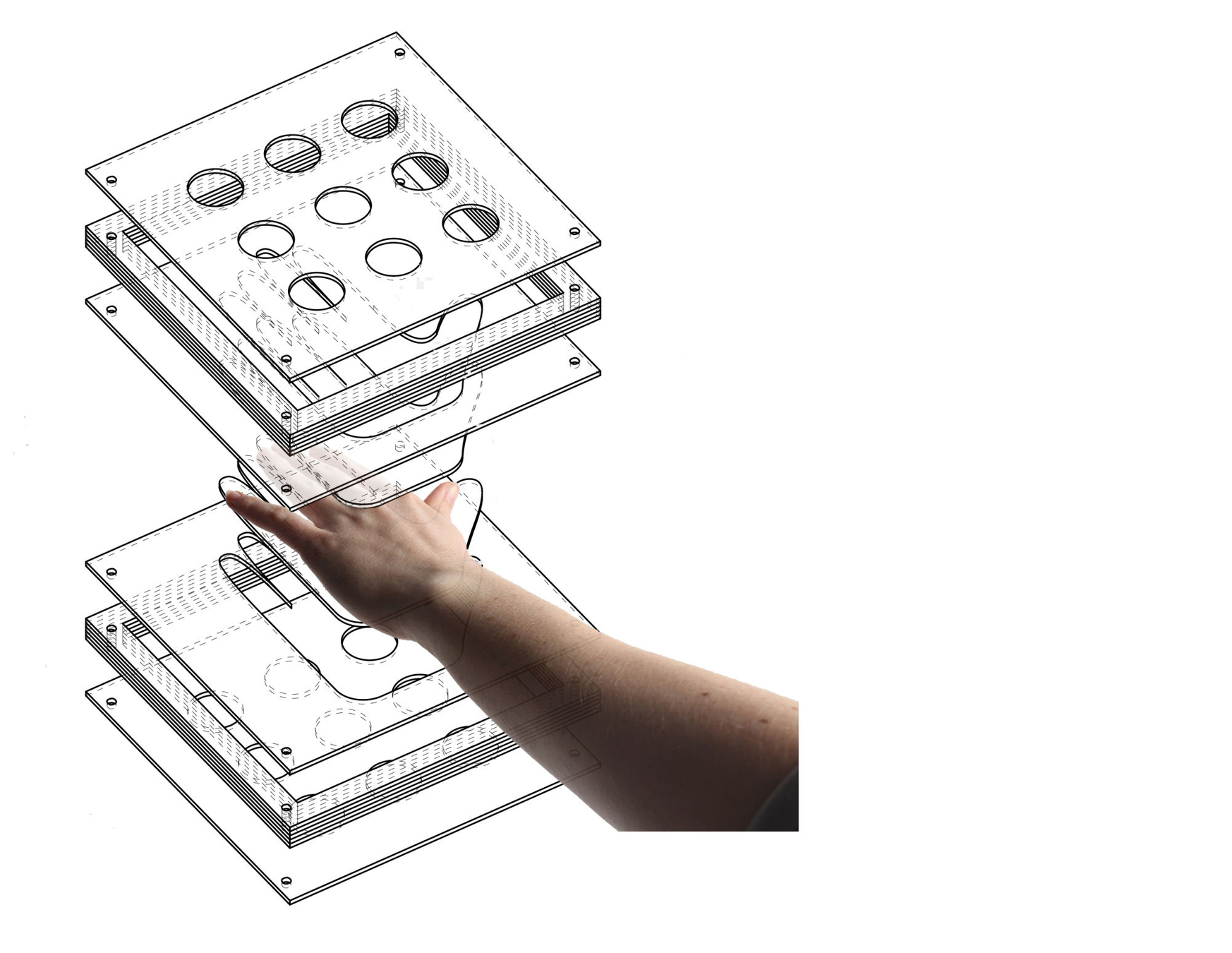 The Magnetic Compression Glove Station was inspired by the space suit that a team of MIT graduates are working on called the BioSuit. The BioSuit uses mechanical compression to create atmospheric pressure instead of traditional gas compression. We worked on tackling the compression problem in regards to the hands. One of our original models included a flap with magnets in it that, when placed on top of the base glove, would become attracted to the magnets on the bottom of glove therefore creating a compression effect. This solved the problem in theory but we wanted to push the boundaries;we created a magnetic glove station using electro magnets. The user could put their hand in this station, turn the electro magnet off, and the magnet fabric on the top and bottom would attract to one another making a glove shape around your hand. (See process to know how it works). We additionally began to develop a 3d printed "fabric" that would function as the glove.

If we could go a step further, we would make a more flexible magnetic fabric to allow for a wider range of motion. Additionally, the dimensions of the individual triangles would be be made significantly smaller and customized to specifically fit a an individual's hand. Also, we would hope to make the height of the station adjustable to allow for a greater variation of hand sizes to comfortably fit inside. Additionally, this modification would allow for the fabric to be closer to the electromagnets-easing the "removal" process.