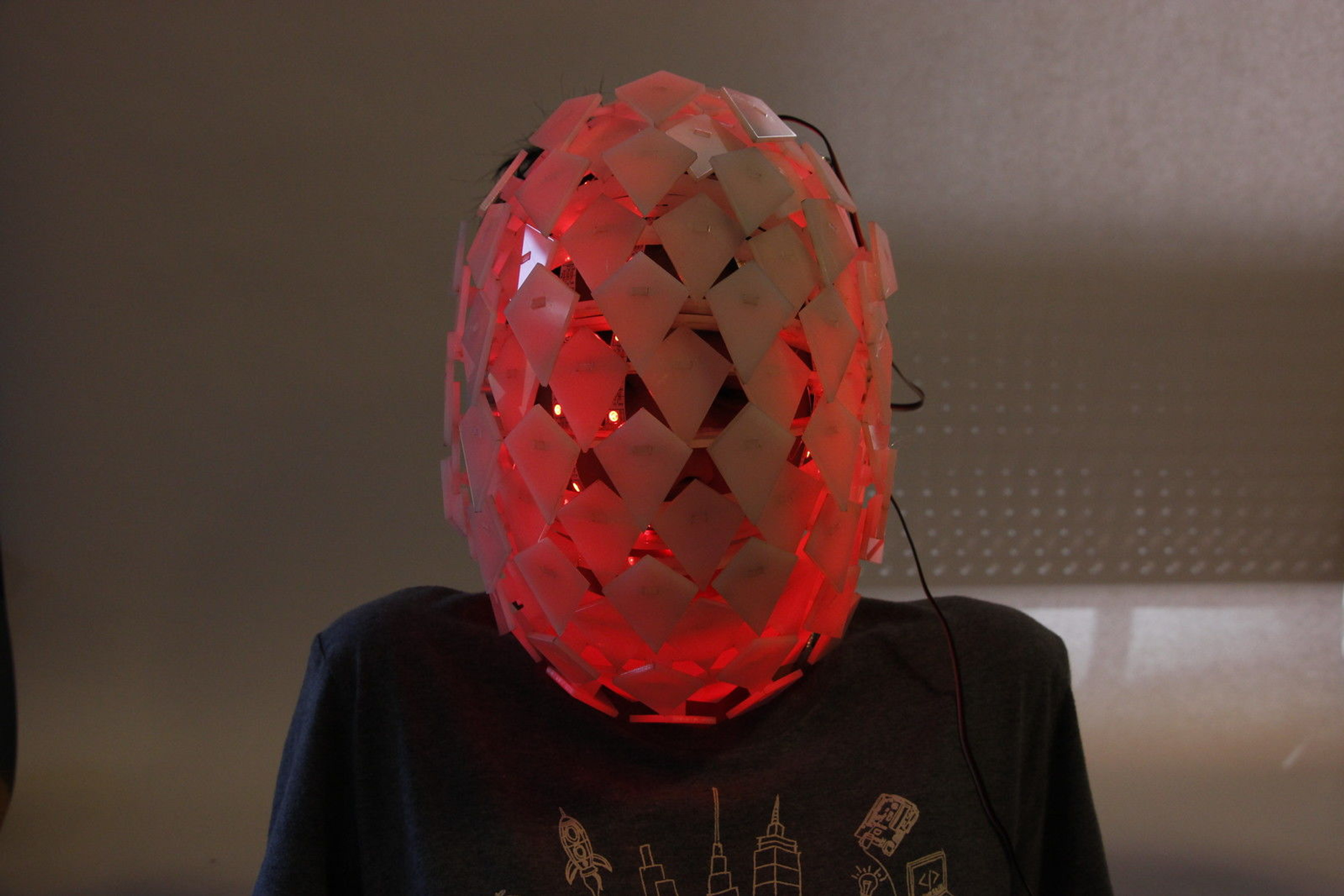 Continuing from the Mark I mask we made in the Uno Space studio, there were two main goals in mind going into the IPP session: To make a functional, wearable, glove; and to make a well crafted, organized second version of the Mask. From this there were two main processes: The glove building, and the Mask Building. In the end, we finished with a fully functional, and wearable glove, and a fragile, yet beautiful Mask Mark II. Just because I gave Mark I the nickname "yeti," I'll name this Mark II version "Guy" mask because it reminds me of Guy Manuel of Daft Punk.

Starting this studio, the glove had a 1st gen version of the wristband, pressure sensors, and rings that worked, but weren't perfect.

First, we made better rings, with holes that were not too small, and not too big either. There was minimal protrusion from the hole on this version.

We also made a better version of the wristband, this time with a battery slot, and a hole for the wires to feed through.

Next, we made a pinky ring because the regular sized rings were not fitting on the pinky's first knuckle; the hole's diameter was too big.

From there, we decided the rings were finalized, and started to play around with conductivity to incorporate the switch in a more seamless way than just having two male connectors to touch each other.

Next, we organize all the wires and use electric tape to separate them in an organized way, and connect them to the arduino on the Wristband, and the Glove is complete.

The mask design was started a little late in the two weeks. We started with Rhino, and make difference arches based on approximate measurements of my face. From there we designed a model and laid out the pieces for the laser cutter. There were a few design changes along the way, such as the addition of the ear pieces, or the shape of the tiles, but none of those were physically iterated because of material conservation. After everything was cut out, everything was assembled to make the mask. Because of how small we made the Ear Pieces, the mask itself is a little fragile, but is still strong enough to be worn. The holes for the LED's didn't line up properly, so the LED strip ended up being hot glued in a last minute effort to have the mask presentable that Thursday. The mask is near perfect, and if I ever have the opportunity to make another one, I already know which issues need fixing, and how to fix them. Going off of where the last studio left off, there were two main goals for our independent session: to make a functional "control glove," and to make a more organize, well constructed mask.

The glove was made well, although I wish there could've been better wire organization, and maybe some color coordination for aesthetics. The rings housed the pressure sensors, and all had wires tha converged to the wristband pretty nicely.

We made the mask construction 100% intentional this time, as opposed to the random scale placement of the Mark I, "Yeti" mask. For the Mark II, everything was designed in Rhino, and specifically made to fit together. Because everything had to be so exact, there were some small mistakes and things that didn't work out as anticipated, but overall it came out looking good.