In our society today there are a lot of questions being asked about whether we are going to have to live on the moon, and if so how would we get there and how would we live there once we got there.  After doing an extensive amount of research we concluded that getting to and living on the moon is currently impossible for humans.  We found that the primary reasons for this originates from our own bodies and how our muscles and bones work.  We found that the lack of gravity can have a seriously negative affect on ones health.  It starts with the muscles and bones weekening in the lower gravity enviornment because they do not have to work as hard.  This than has an affect on ones blood flow and eventually the heart and can actually end up killing a human over time.  In addition maintaining proper nutrition for a large population would also be impossible because animals would not be able to survive there for the same reasons humans wouldnt.  In addition, lunar days and nights are two weeks long in earth time, and the sun's rays are far more powerful on the moon than on the earth thus making maintaining our agriculture almost impossible.  We wanted to make an informational video that captured all of this information, but in a slightly humurous and light manner.  We ended up finishing all of our illustations and animations however we did not have time to render any of the videos except for one.

Right now there is no sound with this video, but this is the portion of the script that this animation is for.

"That all sounds great, but there are, of course, complications. First off, there is the cycle of day and night on the moon. Measured in earth days, a moon­day is 2 weeks long, and the night is just as long. Not only does this make solar power impossible without more efficient energy storage..." 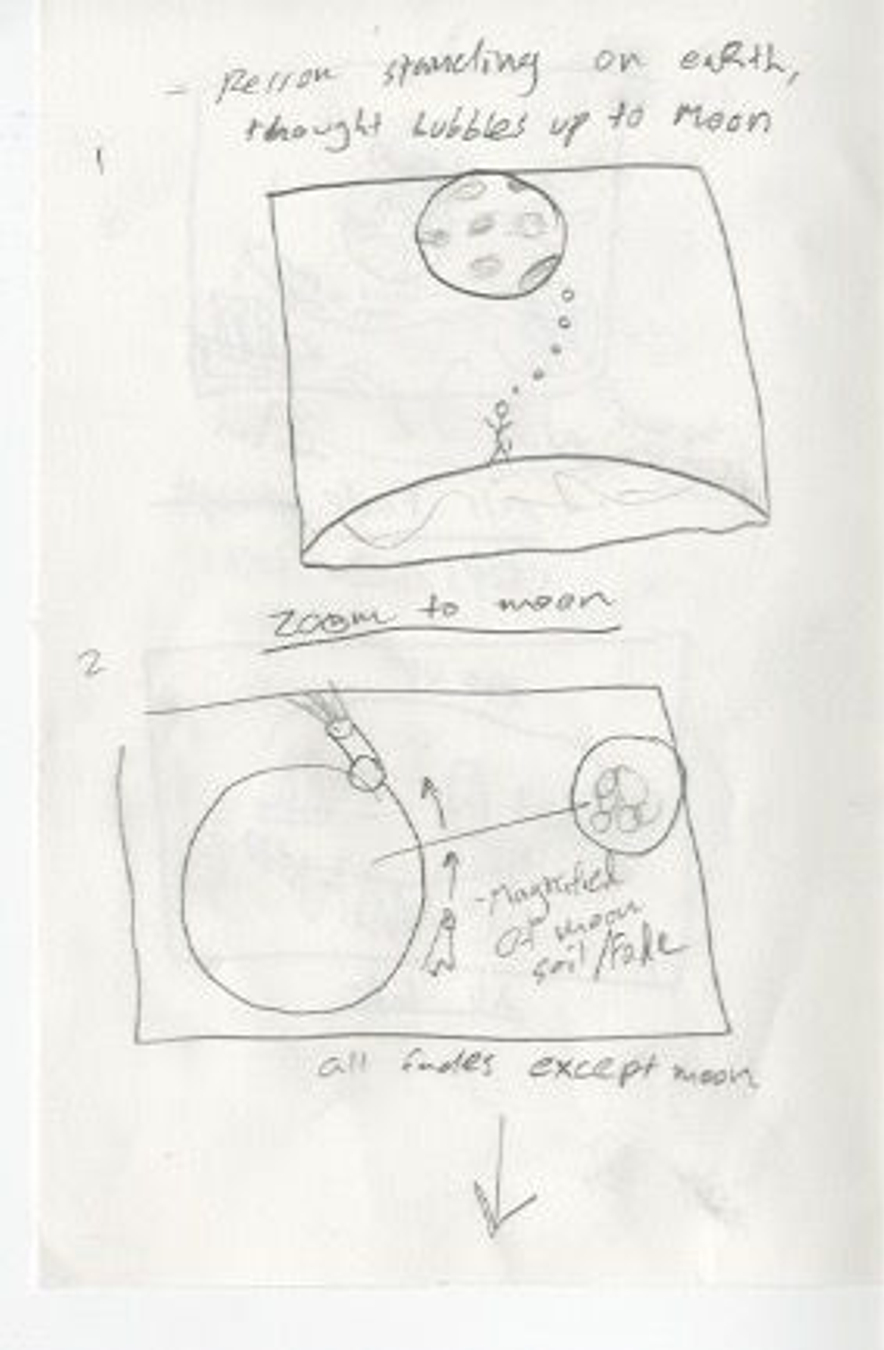 Our group's goal was to make a video that proves that currently humans cannoth live on the moon. We wanted the video be both funny and entertaining but also informational. A scientist named Brad from MIT who specializes in space suits came to talk to us about the intricacies of living in a zero gravity world. We learned all about how our body would react in such a low gravity enviornment. We were very interested in exploring the ideas of how it would be possible to live on the moon. The moon has about 1.622 m/s², so a lot less compared to Earth, which has 9.807 m/s².

Brad told us about an organization known as "Mars One." This is pretty much a scam. People are being told to apply to be on a reality tv show where they will train to take a one way trip to Mars. We decided that we wanted to prove this show wrong, because there is no way that people could actually live on Mars.  Mars has about 3.711 m/s² of gravity. So we took the ideas that we learned from Brad and the idea of proving the "Mars One" organization wrong and started creating our project.

Our first task was to create the script for our informational video. We started out by deciding to make three main reasons why living on the moon would not work. The first is that there would not be enough resources to stay alive. There is no food or water on the moon that would keep a human who is adapted to Earth alive. Our second reason is that with no the gravity the body would get very weak. On Earth, because of the amount of gravity, there is always a force going against you, without this muscles will become extremely weak. Our third reason is that aside from all of the health issues it would cost billions of dollars to get people to the moon.

After the script was completed we started a storyboard.  Storyboards are extremely important because one needs to know what illustrations they need to create before they can start the actual animation. As a group we created rough sketches of what we thought each scene would look like, and how the illustrations would animate on and off of the screen.

Once our storyboard was completed we created a list of all of the illustrations that we would need for our animation. We created some of the illustrations ourselves in Adobe Illustrator. Others we found on Google Images and just changed the colors so that they would work with our color scheme. For example, the Earth we took from Google Images but changed the colors so that they were more calming colors because that was the look we were going for.  The color pallete that we chose to work with is the same color pallete that Amro used in the opening animation on the Spring 2015 page.  The matching of colors to the color pallete was not a difficult task but a very long and tedious one.

We were unable to put all of our individual parts together to create one full movie due to time constraints and absences in the last two days of the studio. We have uploaded one piece that will give you an idea of what the full movie would be like.