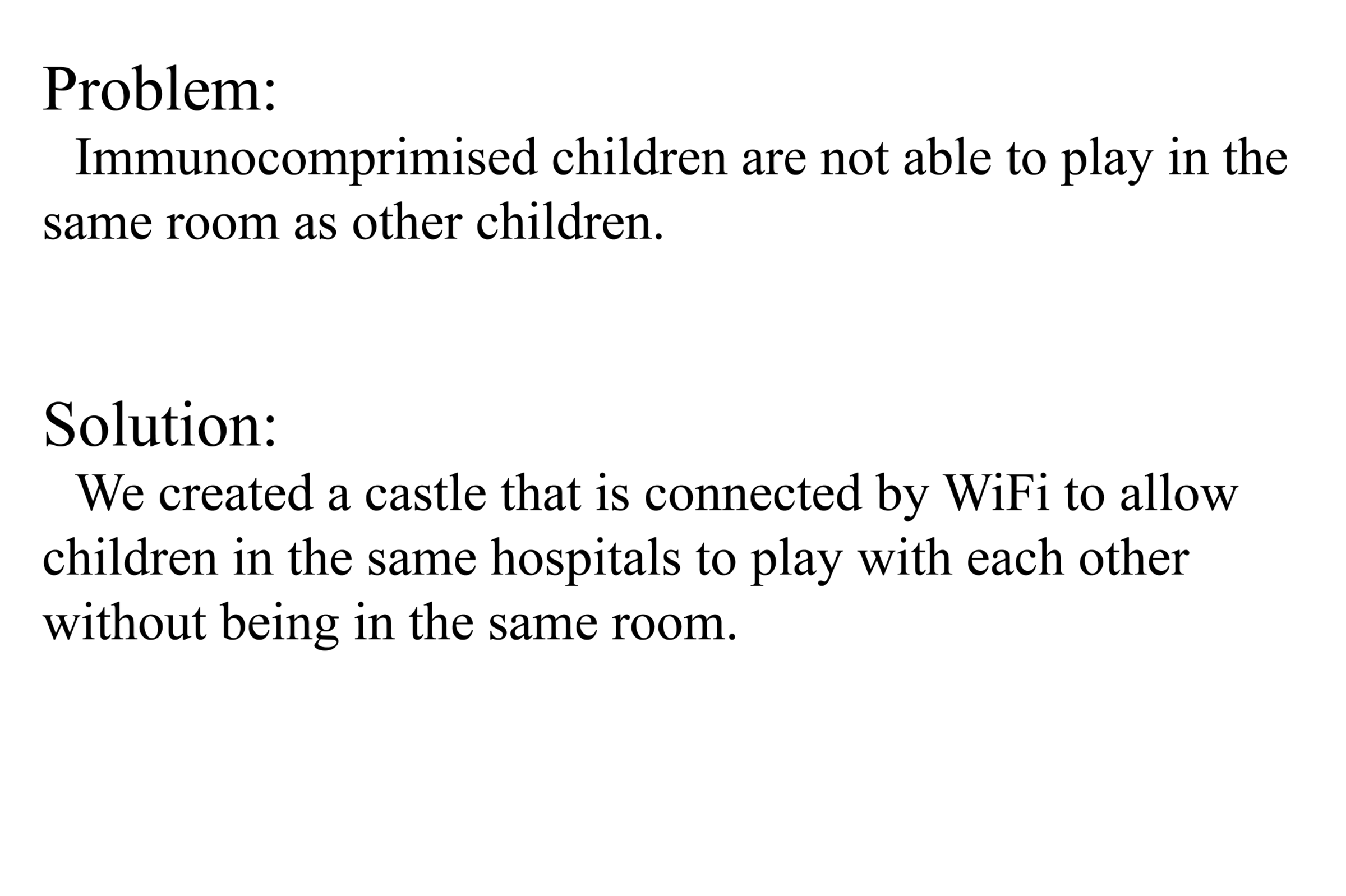 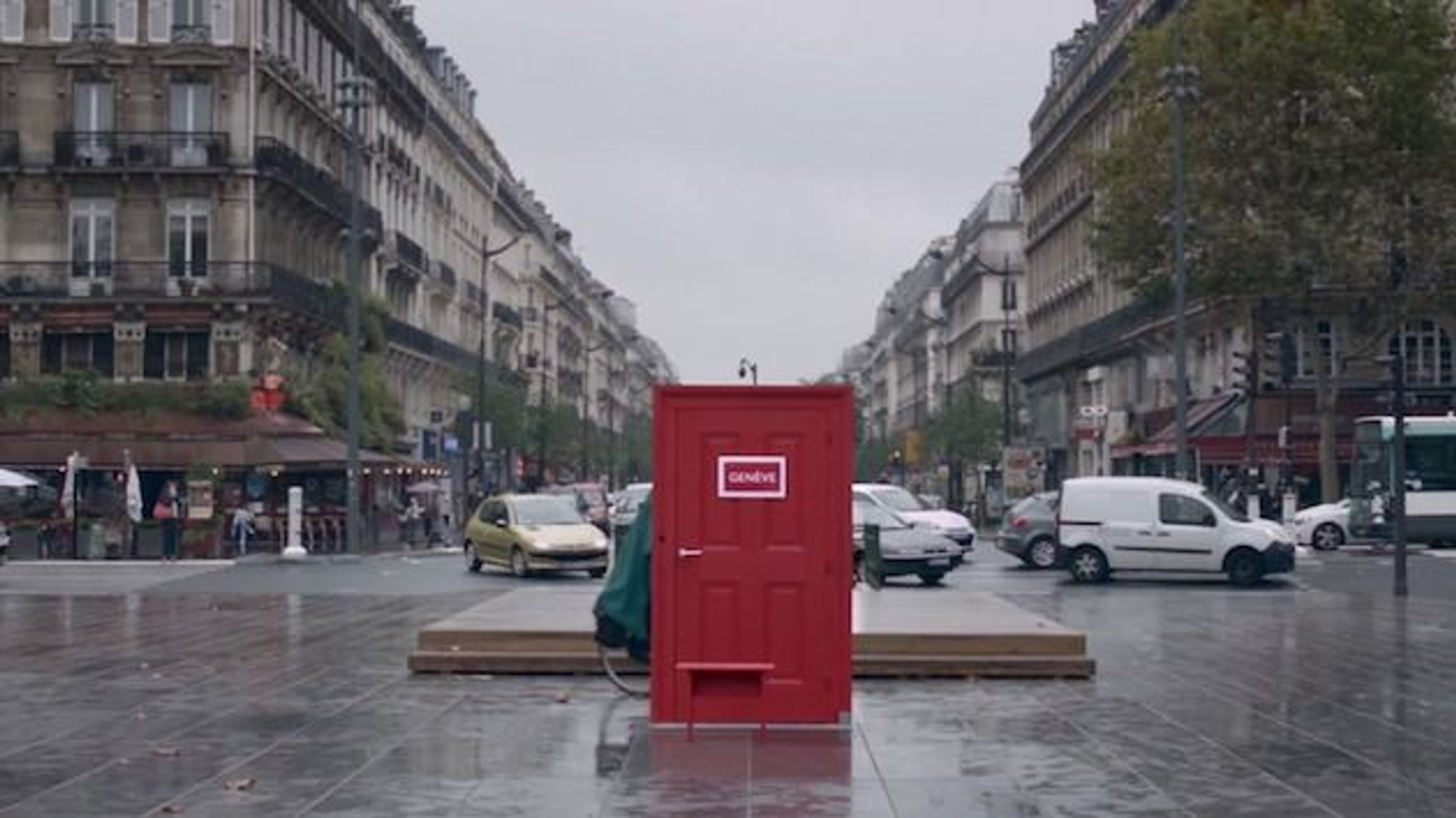 The problem our group choose to adress was that many children in hospitals have impaired immune systems or other illnesses that require them to stay in bed or their room and not have contact with other children. Our solutio was an interactive castle allows children in separate bedrooms to play together. There are two arduinos connected by wifi in two castles. Each castle represents half of a bigger castle, so an action done on one side of the castle will trigger something to happen on the other side. We decided to create an interactive castle because we wanted to make something that could help kids in hospitals feel more connected to each other. It is nice to have someone to play with even if they aren’t physically there.

We designed two castles out of wood, each have two floors.  We have three major electrical components of the castle, that connect to the other half of the castle. We have a catapult in each side, when the catapult is shot by a spoon being pulled back that hits a button, it triggers an automatic catapult in the other castle to go off. That catapult is controlled by two servos, one tightens a spring and the other holds the spoon in place until the spring is tight enough to make the spoon pop up and shoot a small ball. We also have a crank on one side of the castle, that is connected to a potentiometer that turns a servo in the other castle to open the door. Our last mechanism is a box with a photoresistor that if you put a plastic person in a box, it will sense the darkness and the box will close opening a box in the other castle revealing a similar person. This creates a type of way to pass characters.

We faced multiple challenges including that it was hard to get the 3D printed pieces to work together with the servos. It was hard to test everything with the electronics because nothing had a strong base. We didn’t want to print out the whole two castles because they were big cuts and it would take too much time. The hardest mechanical part to get to work was the automatic catapult because the springs have to be in a specific location and both the servo holder and the spoon have to align.

Our first idea was to make a screen enclosed in a kid friendly object that would show a program. The software allows kids who have to spend a lot of time in the hospital to contact other kids in similar situations through video chat or just text. The kid friendly object would almost be a toy so that it would be a change from the environment of the hospital. The ‘toy’ can be taken out of the hospital on tours of the city, to show the user on the other end around a different country. We decided we would focus on helping kids and the excitement that kids would get from our project instead of all the coding.We decided to move away from making an app we started brainstorming ways to help kids who can’t leave their rooms in hospitals to interact with other kids.

In our second iteration we changed the size of the castle because we realized that we needed the height of the castle to be greater than the length of the sides. We also redesigned the tower and the tower roof because they were also too short. We also made newer versions of the mechanisms. We designed the box and the drawbridge in Rhino so the measurements would be more precise and we designed the cataput in Fusion.

In our final the we made the castle wider and added features sunch as stairs. we also redesigned both catapults once more. We changed the size of the catapults and added features such as hinges. we also worked on how the box would open and how the servos and electronics would fit into the castle. Working around the electroincs made or final change a lot from out second iteration.