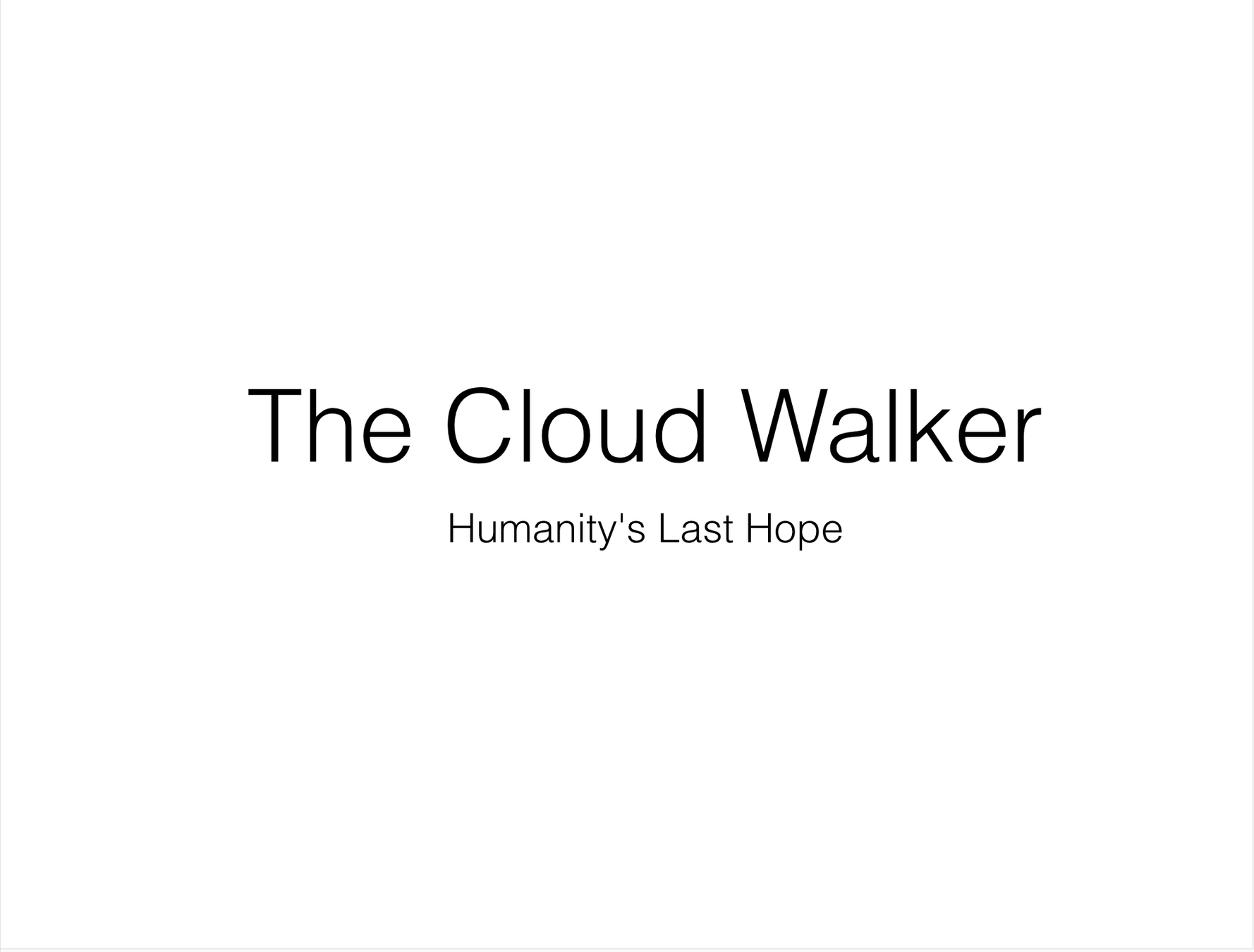 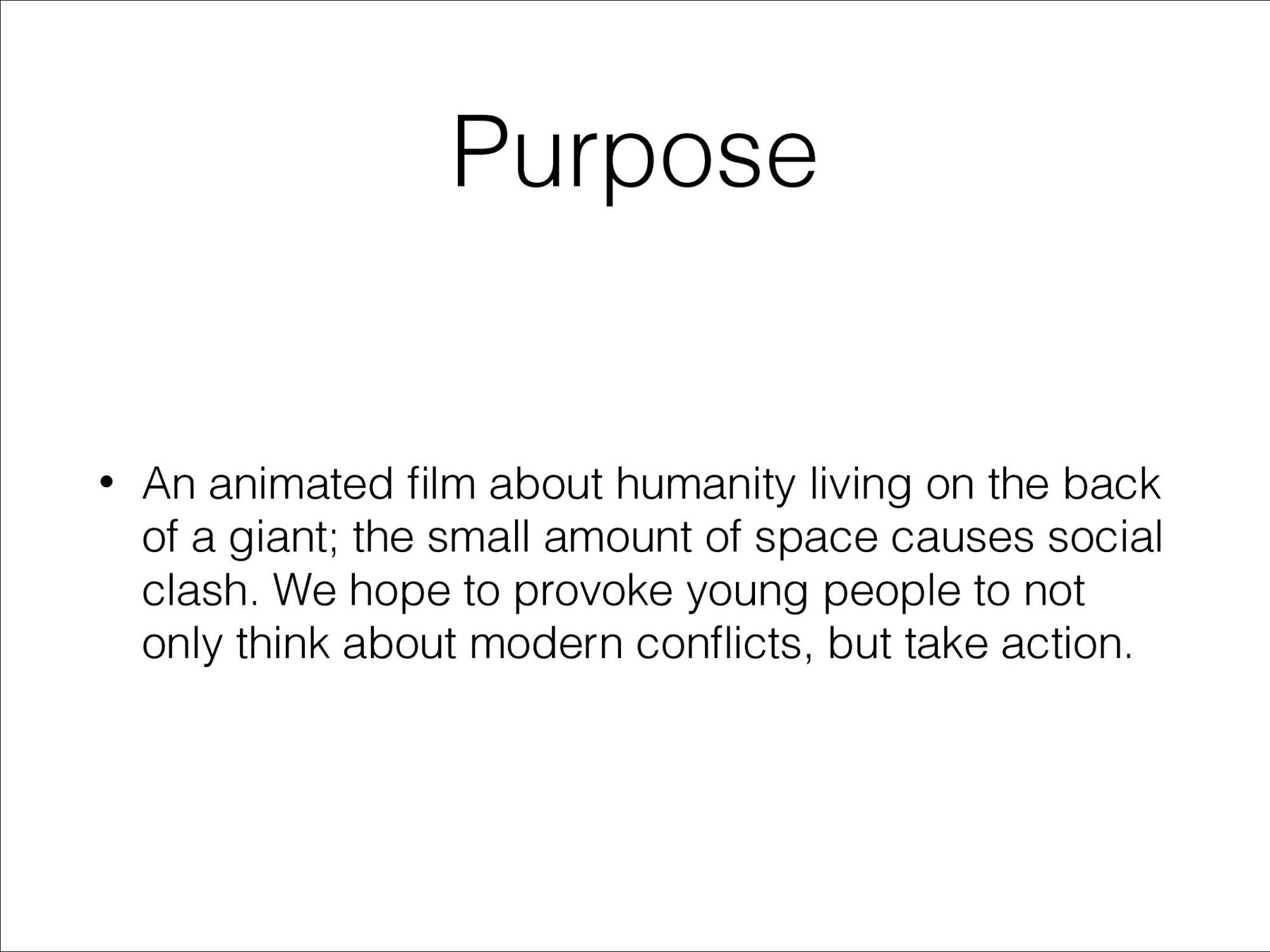 Our animated film revolves around a stone giant which serves as humanity's home who marches without stop on clouds, symbolizing society's continuing growth. The human-human conflicts in our story represent modern events happening in the world around us. We hope to provoke young people to not only think about modern conflicts, but to take action in the world today.

Our story opens with a steam punk city on the giant's back, followed by a shot of the marketplace. In our world there are two social classes: the lower class, who mines minerals out of the giant; and the upper class, who buys those minerals from the lower class. Since there is no other resource to barter, the price of gems has decreased exponentially. The marketplace is a series of stalls where the lower class sells to the wealthy. One day, a boy is mining behind a stall. A wealthy man who shows off a coin catches the boy's attention. The boy kneels down and begs for it. The upper classmen flings the coin off the side of the giant. He turns his back on the boy and starts to laugh. The boy is initially shocked by what has happened; this turns to anger. He hurls a rock at the wealthy man's head. The entire crowd stops in their tracks with an enormous gasp; the silence is broken by more class on class violence. This turns into a riot. One rioter lights a stall on fire, setting the marketplace ablaze. At this point, the giant stops walking forward. The entire city is on fire while it folds up neatly like a machine; it looks like a natural function of the contraption. These buildings slide off of the giant or are absorbed into him. He then falls over, out cold. A few days later, on the giant's back, people gather from both classes to help each other build a new city from the old materials, representing a new era for society. Our animation ends with the giant's right eye opening after the city is built.

Our precedents include the Iron Giant, Theo Ellsworth's art, and the Game of Thrones intro visuals. First, the Iron Giant is a young and excitable version of our character: they are both very careful and thoughtful beings that, despite their massive size, would never hurt a fly. Next, Theo Ellsworth's art is very similar to our style: there is a lot of detail, uses negative space in an interesting way, and has a lot of funky shapes. The Game of Thrones theme is super similar to the scene where the buildings collapse neatly like a contraption.

Instead of the final Russian-like stone city, we were thinking about splitting up the city buildings into a couple circular platforms. Each platform would be on top of carved stone faces, which together form an aqueduct flowing through the city. Each of the faces would represent each social class, showing that all are equal. We decided to go with the stone pillars instead because the faces felt like it segregated the population into different sections of the giant: how could this be better then the previous system if they are still socially segregated? With the pillars, humanity looks like they are in one city, not two.

We were also going to add the Four Horsemen of the Apocalypse to symbolize the negative events in the story, rather then creating a conflict. We decided that the animation would be more concise and interesting if the conflict was human-based. Also, near the beginning of our process, we wanted a single carver to fix the giant after he had fallen instead of humanity coming together to help each other. The second option is by far clearer and makes the story more cohesive.

At first, our story was to be about a giant who wakes up from a nap to find windmills all over his body. He had been asleep for 150 years. He is confused and runs from humanity, as they continue to try to use him as a elevated place to collect wind power. Since the giant takes one step per day (he is very slow) humanity can catch up with him by building contraptions in front of him. However, in the end, the giant escapes into the ocean. We decided to flesh out the story more and give it more meaning with the final product.