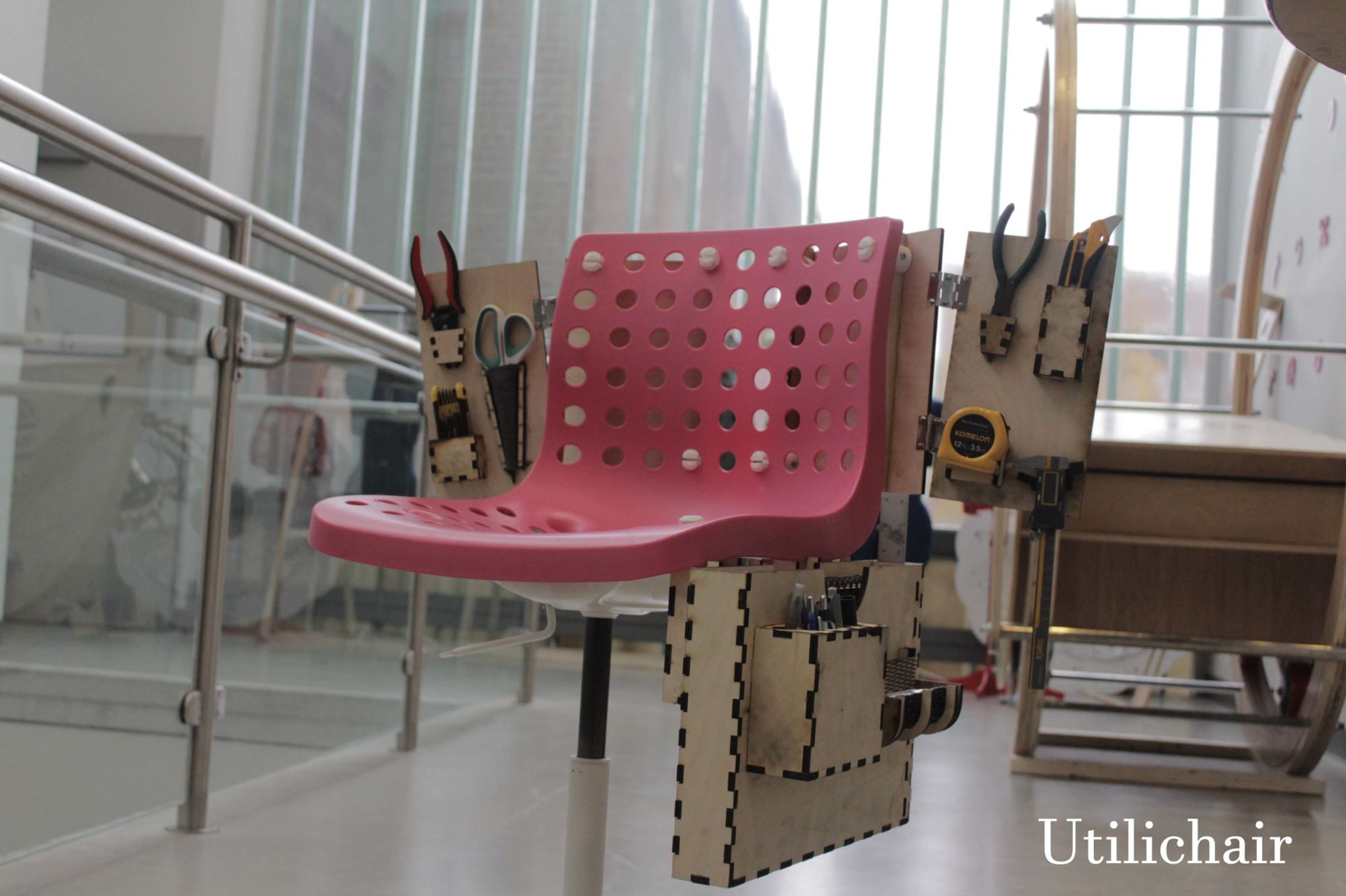 When you need a tool at NuVu, usually one of two things happen, either they waste time looking for tools in the shop, (where finding a tool can be very confusing) or are searching on their desk (wasting more time in some cases). My solution to this predicament, is to create a chair mount that will hold all the tools you need, reducing time wasted looking for tools, as well as helping desk organization.

There are many, many wonderful things that happen at NuVu, and many great systems to help those happen. However, not every system is fantastic. Currently one of the biggest problems at NuVu is that desks are unorganized, with people not being able to find the tools they need. Although all our tools are stored in the shop, allowing you to grab a new set, this system ends up wasting a lot of transition time, as well as being very confusing at times. In the past there have been a few attempts to solve this problem, like the tool wall at the underground, as well as a similar project done last year. However, these solutions left a lot to be desired, the tool wall, although organizing the tools very well, can make it difficult to find a specific tool, as well as still requiring a trip over to the shop for grabbing the tools. The previous project did improve on this some, mounting to two tables, and holding tools via two flat wood planes with holes for the tools. While this does save trips to the shop, unfortunately the way it was designed made it difficult to put the tools in, as well as making it impossible to move the two tables without removing and reattaching the device.

With all of this in mind, I realized that there were a few things that I had to focus on: that the tools were easy to remove and re-insert, that the tools need to be near the work space, not to put too many things in one general place(to avoid getting cluttered/confusing), that the mount needed to be removable, as well as not getting in the way when moving it around with the mount. In my design, I took advantage of the hole-filled design of the chair, using pegs to attach all the components. I primarily used specifically sized boxes to hold the tools (primarily due to ease of use, and preventing confusion for where things go). The design features a sketchbook/laptop holster on the bottom left side of the chair, holding 15+ pens/pencils, a sketchbook(obviously), as well as a slot for a ruler. On the top of the chair, I have panels vertical panels with boxes for holding the tools. When not using the top panels, they can be folded back to fit the approximate dimensions of the chair. In total, the top panels can hold: a caliper, wire cutters, pliers, scissors, a tape measurer, an allan key set, and a box cutter. 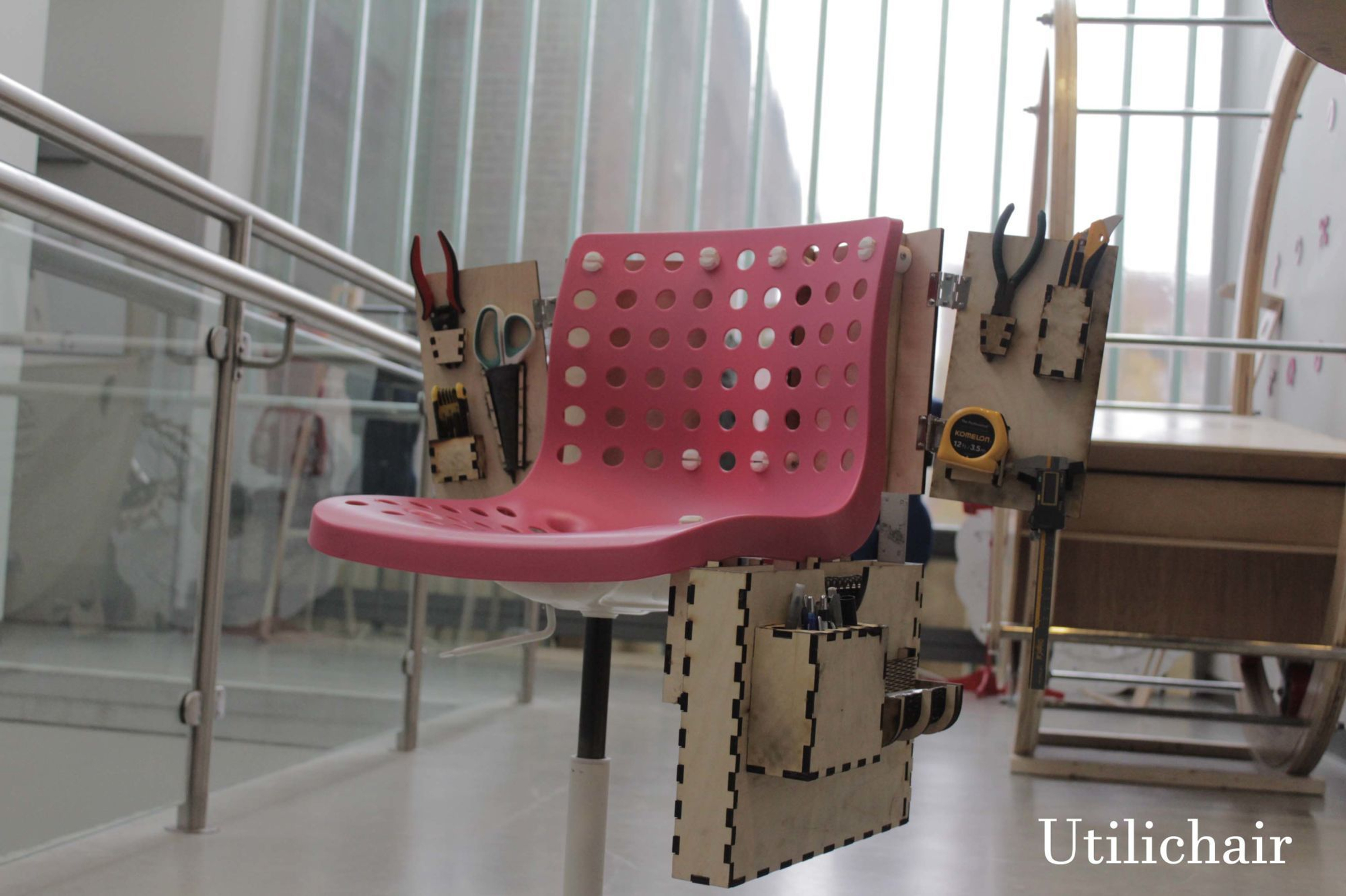 My idea had rather peculiar beginnings, to say the least. I personally have an extreme love of trench coats(irrelevant I know, but it'll make sense later.) and one day, I was talking with some fellow NuVu students, when I had a rather silly idea of creating a NuVu trench coat, using the pink and white color scheme of NuVu. While I thought of it as a sort of joke then, I began thinking upon it later, considering what a NuVu trench coat would be like, wondering what I would do if I wanted to create something specifically to help out at NuVu. Once pondering it for a while, I decided that tool organization was a big problem, as well as being approachable in creating a solution. I almost immediately fell in love with the idea.(both for using the project during my time at NuVu, as well as my bias towards trench coats) When beginning open innovation, I was still planning to create a NuVu trench coat. I began by doing a lot of research into how trench coats are made, planning to create a coat according to normal methods before creating one from the ground up with NuVu in mind. Soon, one of my coaches led me to  the realization that not many people would be as eager as me to dawn a bright pink trench coat, weighing about 20 pounds filled with tools. Having come upon that point, I decided to split into a table mount, chair mount, and a garment. (I still wanted to try to incorporate a trench coat somehow.) After planning what I was to create, I promptly made a list of tools that were most commonly used at NuVu. While in this early stage of development, I was also introduced to a similar project done last year, which was a table mount, (again) holding tools. Seeing that a table mount had been done before, I decided to begin with the chair mount, creating a simple cardboard mount going around the side (for ease of access) with simple holding devices. From there, I realized that having a big piece of cardboard sticking out from the side of your chair got really annoying, and whipped up another version, with a tape hinge to get it out of the way. From there, I moved to the lower segment of the chair, making a sketchbook, ruler, and pen/pencil holder. using simple hooks to mount it on. Moving on from that, I changed the mounting mechanism to pegs, helping stability, and optimizing the sketchbook section for better space management. At that point, I began zooming out, designing, and arranging the tool holders for later iterations of the top mounts. After that, it was primarily just tweaking the holders to be best suited for their tool, as well as changing where they're placed. In the process (as you may have noticed) I decided to do a more comprehensive chair mount exclusively rather than my bigger original plan. When developing my product, I didn't go through many major design changes, with most things being merely improved versions of the original prototype. While this is very different from the way most projects go, it was a conscious choice. With this project, I wanted to focus on creating the best possible experience, rather than trying to go with the coolest sounding idea, and constantly changing everything. As a result, most of my time was spent carefully moving things around, making sure the tools fit, and are appropriately placed. All trying to create a smoother, more intuitive, and easier to use experience. Additionally, one of the most important steps was thoroughly testing each change that had been made, to find what can be improved. In the end I didn't make multiple prototypes exploring completely different avenues, and I didn't try to make some "super innovative creation that will change the world as you know it", it's not terribly innovative, and it's not a ground shaking step forward for mankind. However, I didn't create this to be that, I am not trying to make something spanning across headlines. I created this project to help the people at NuVu, make their process of building a little more efficient, and help them to create these amazing contraptions that are changing the world. In conclusion, this was not created to wow crowds, this was made to help make the process a little easier at NuVu, or other places like it. I enjoyed this project, it was refreshing to solve a relatively small problem, and being able to directly see the results of my creation, rather than trying to make a solution to some big world problem, where you have to put yourself in someone else's shoes.